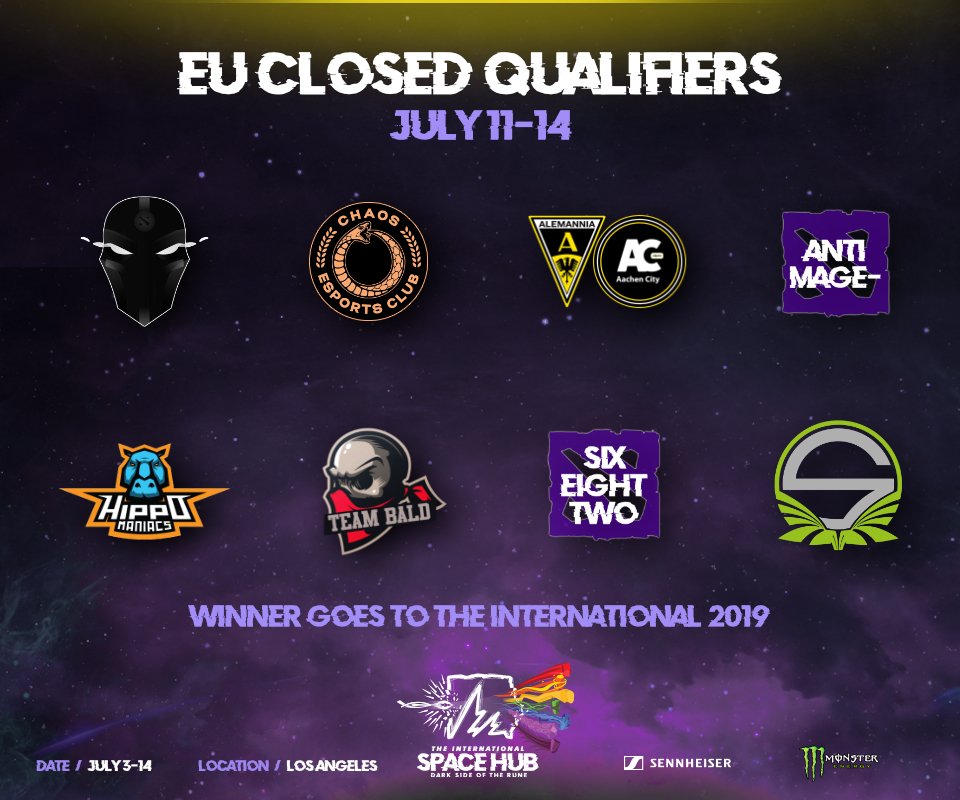 The TI9 Europe Qualifier Group Stage was a dogfight with a trio of tiebreakers needed to see who progressed on to the playoffs.

Europe has been a Dota 2 powerhouse this year, and it’s only fitting that five European teams have already secured their spot at The International 2019. In fact, almost every top tier team for the region qualified this year, leaving room for new faces to emerge at the qualifier.

The TI9 Europe qualifier group stage proved that this “second-tier” of European teams are not to be underestimated. It was an incredibly competitive group, with five teams finishing up the regularly scheduled matches with winning records. The field was only narrowed down to four teams after a trio of tiebreakers. Hippomaniacs, The Final Tribe, Chaos Esports Club, and Aachen City Esports emerged from the group stage and are headed to the playoffs tomorrow.

The list of standouts from the past two days’ matches starts with Hippomaniacs. The past 15 months have been the team’s first period of full-time tournament attendance, and while success has been limited, they’ve clearly learned from this experience. At TI9 Europe qualifiers, the squad was able to draft at a remarkably high level. Their 40-minute win over Aachen City Esports in day one was the perfect example of how the team’s consistency in the lower tiers.

Another definite favorite after the group stage has to be The Final Tribe (TFT). As if Dota 2 didn’t already have its fair share of Swedish super teams, TFT spent the past year winning top spots across tier-two tournaments. Against their qualifier opponents, TFT looked like they were more than ready to take things to the next level, despite being heavily tested by ACE and the Hippomaniacs.

The biggest disappointment from groups is Team Singularity. The org only returned to Dota 2 in February of this year but had great success against teams including Ninjas in Pyjamas, Team Empire, and TFT. However during this qualifier, the team was unable to muster more than a trio of victories against their opponents.

Locked in a three-way tie after two days of matches were Chaos Esports Club, Aachen City Esports, and newcomers Anti-MagE-. Chaos was almost certainly the favorites coming into the qualifiers but found themselves battling for survival after the second day. Notably, even with Team Liquid émigré Lasse Aukusti “MATUMBAMAN” Urpalainen, the team struggled to put up more than a 4-3 record.

Aachen City Esports was not the fan favorite’s going into the Qualifiers but thanks to a break-out performance by the European team, they managed to make it to the playoffs. ACE’s mix of role swapped players, former Heroes of Newerth pros and unknowns secured win after win.

WE'RE IN THE PLAYOFFS!

We win both our Tiebreaker matches and secure our spot for tomorrow! GG Anti-Mage!

The brother stack is one step closer to TI!🤩#CreateChaos pic.twitter.com/GLR8zVIxPd

TFT will face Chaos tomorrow, as Hippomaniacs meet ACE. The qualifier playoffs wrap up on Sunday, and one of these four teams will join Team Secret, Team Liquid, Ninjas in Pyjamas, OG, and Alliance as representatives of Europe at TI9.