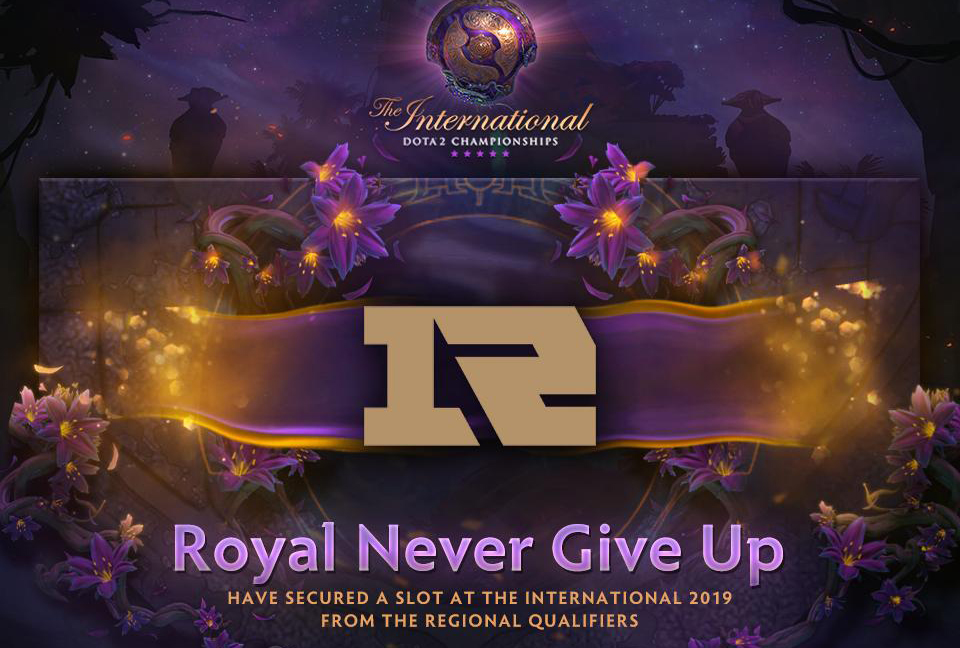 After a grueling five-game final against CDEC Gaming, Royal Never Give Up emerged victorious from the TI9 China qualifier.

After an incredible playoff bracket, The International 2019 China Qualifier have concluded and China’s final representative will be Royal Never Give Up. After a grueling five-game final against CDEC Gaming, the team emerged victorious, having been pushed to the limit by their opponents. In a back and forth series, neither squad could eke out a win until the very last moment.

After an incredible run through group stages that saw Invictus Gaming drop only a single game, the team floundered in day one of the playoffs. Against EHOME in their opening playoff game, the squad looked helpless against Yang “NeverEnd” Pu’s Anti Mage, which by late game, was literally melting his opponents. The second game wasn’t much better, a 30-minute demolition, where IG was barely able to get anything going.

In their trip to the lower bracket, IG didn’t fare much better, butting heads with Royal Never Give Up that was reeling from a pair of losses to CDEC Gaming. IG tried everything in their arsenal, including drafting an Arc Warden, Enigma, and Sven, but nothing seemed able to dent RNG’s resolve. The team which had seemed so promising in groups found themselves the first team eliminated from the playoffs. RNG advanced, eager to get some revenge against CDEC.

In the upper bracket, EHOME struggled against CDEC who seemed to have found success with drafting Troll Warlord as their carry pick. In game one, CDEC continued their playoff trend of struggling in the first game. They struggled the same in their opener versus RNG, allowing their opponents to push the game past the 50-minute mark, that only swung in their favor in the final minutes of the game. In game two they didn’t make the same mistake twice. They quickly dispatched EHOME, sending them to the lower bracket, and advancing to the finals.

By defeating @EHOMECN we've made it into the Grand Finals of the #TI9 Regional Qualifiers – China.
Tomorrow, one Bo5 away from qualifying for #TheInternational 2019! pic.twitter.com/Fvo2vYQPry

Most of the matchups thus far in the China Qualifiers had been one-sided and had been demonstrated in 2-0 victories. This could be because the matchups were far more one-sided and thus gave a bigger advantage to one team. Seeing as RNG and EHOME were more than a match for each other, it made sense that their series was closer. Throughout the games, RNG relied on Su “Flyby” Lei and his Tidehunter to hit crucial Ravage’s. With such a critical AoE ability that has great team lockdown, the squad secured a win. EHOME found themselves eliminated in spite of their admirable performance. The team has fallen a long way since the midpoint of the Dota Pro Circuit, where they had secured several top-three finishes. After the China Qualifiers, it fair to say EHOME was never truly able to recapture their early season form.

In the finals, RNG met CDEC for the third time this tournament. CDEC had easily vanquished RNG in their playoff opener, but in turn, had lost to them in groups. In the opening match of the series, CDEC looked to replicate their previous success, grabbing a quick victory with their fed Razor. However, RNG quickly punched back, grabbing an eerily similar pair of wins with the same Centaur Warrunner/Shadow Demon/Witch Doctor combo. Unwilling to get rolled by the same team comp three games in a row, CDEC took away the Centaur in game four, and gave RNG a taste of their own medicine, setting up an all-or-nothing fifth and final game.

With everything on the line RNG picked up Lifestealer for Du “Monet” Peng, and for the first 30 minutes, it looked like a big mistake. RNG barely clung to life, as CDEC were able to counter every move they made. The first 15 minutes especially, was a scrappy battle for supremacy, with a dozen kills on both sides of the map. But after Monet picking up his Abyssal Blade, the game was turned on its head. RNG began to dictate the pace of the game. After a climactic fight burnt all of CDEC’s buybacks, RNG was able to engage at their leisure, securing the win and their spot at TI9.

After almost three hours of games in the final, RNG emerged victoriously. In fact, after their victory over EHOME, RNG had been playing top-level Dota 2 for more than four hours straight. The Team had narrowly missed out on a DPC direct invite to the tournament but they redeemed themselves and are rightfully headed to TI to compete on their home stage for a chance of glory.