The Return of Puppey vs. Kuroky at Mad Moon Day Three 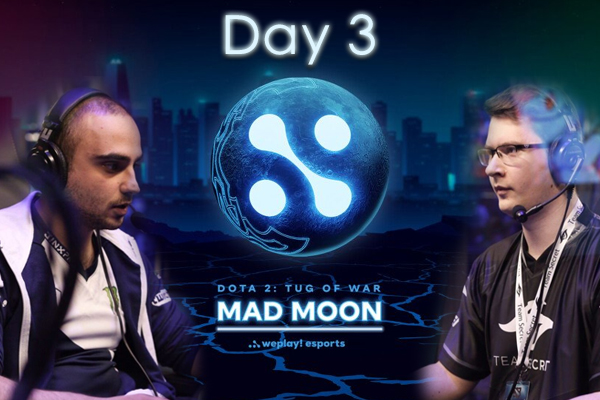 The rivalry of Puppey versus Kuroky reignites as Secret faced against Nigma at the start of the Mad Moon playoffs. (Photo courtesy WePlay!)

Day three of the WePlay! Tug of War: Mad Moon featured three best-of-threes in the play-off bracket and plenty of star power.

In the first match of the day Nigma took on B8 in a clash of brand new, player owned teams. In this contest, Nigma had the clear upper hand in both games as the refined drafting from Kuroky set up Miracle- for stellar performances on Tiny and Lifestealer. B8 continue to show signs of life despite their newly formed roster but their inexperienced teamwork was routinely exploited by the more seasoned Nigma squad.

Unfortunately for B8, their quick loss to Nigma sent them right into the second series of the day. There they faced elimination at the hands of Gambit. Similar to Thursday’s Decider match, Gambit appeared to have B8’s number strategically in this best-of-three rematch. Gambit’s solid drafting took advantage of B8’s bizarre game one support Razor with ease and they deftly outmaneuvered B8 in game two.

The Series of the Tournament

Friday’s third series might end up being the best set of the tournament as we saw Nigma and Secret clash for a full three games. After a dominating performance by Secret in game one it seemed we might be witnessing the end of a perennial rivalry between Kuroky and Puppey. Nigma bounced back in game two, however, ramping up the tempo and steamrolling Secret’s last pick Broodmother to the surprise of everyone watching. Game three began with more of the same as Nigma continued to roll with the aggression. Realizing their inability to fight the pressure from Nigma, Team Secret started to orchestrate a strategic comeback through split pushing and clean execution. In the end, it was an over extension by Miracle- which let Secret snatch the momentum back, clawing their way back into the lead. Facing a relentless split push, Nigma’s weaker late game lineup began to crumble and Secret took a decisive final engagement outside of the Roshan Pit to close the game.

This series showed why Team Secret are such a scary team this season as they faced their first adversity and battled back through it. Calm and collected under pressure, the consistent playmaking of all five members of the team is special to watch.

Nigma have been wildly inconsistent this season and often looked outmatched against teams that many fans would expect them to easily beat. Despite these recent struggles, Kuroky and crew looked like their old selves in the Mad Moon series against Secret. There was a bit of a return to form for players like GH, Miracle- and Mind_Control which bodes well for the all-star roster moving forward. We also finally got to see some well executed timing-based lineups, similar to the style of play that cemented Kuroky as one of the best captains of all time during TI7. Some of the inconsistency remains but this was one of the first times all season that it felt like Nigma were fully in control of their own destiny.