The Inspiration Behind the World Showdown of Esports 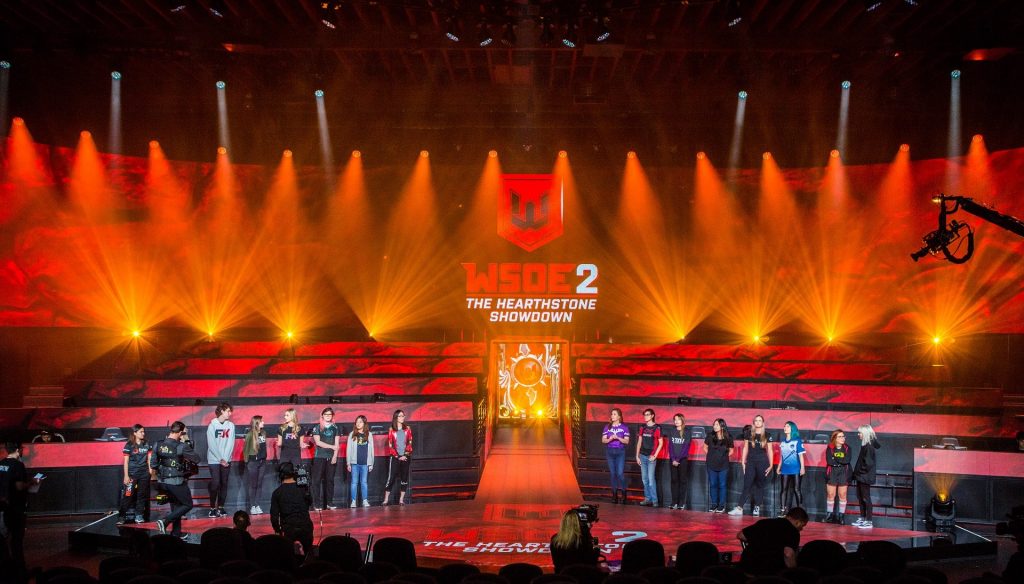 The World Showdown of Esports has brought a new style to the world of competative gaming. We spoke to Richard Blankenship about how WSOE came to be.

It’s a sweltering day in Las Vegas, Nevada. The undercard has finished up and now the defending champion has entered the stage looking to hold onto their championship belt. But the champion isn’t Conor McGregor – or any other fighter – it’s Jia Aquino “Jia” Dee.

This was the setting of the World Showdown of Esports 5, which is better known as WSOE 5. The WSOE brought the championship belt format of WWE to esports. They have held events in four different games so far.

The first time a game is featured, the WSOE functions like a bracket crowning a champion over a quick tournament. From that point on, that champion wears the belt to future events.

Jia was the winner of WSOE 2, the first Hearthstone event. At WSOE 5 she defended her title and still holds onto the WSOE Hearthstone championship belt. This weekend is WSOE 6, and now it is Dota 2’s Team Serenity who will be put to the test by a new challenger.

The event is the brainchild of ESP Gaming, an esports production studio with a background in airing professional poker events. ESP Gaming co-founder Richard Blankenship says the WSOE was designed to showcase the company’s ability to produce esports events in a wide variety of genres.

“With the way the WSOE is set up format-wise, we switch the game on a monthly basis, it becomes a really easy way to show our production expertise to the biggest and best developers in the world,” Blankenship explained.

Even though they have only held events in four games, they have made sure each game is very distinct. WSOE 1 tackled MOBA’s with Dota 2, WSOE 2 went for the digital card game space with Hearthstone, WSOE 3 scaled out to battle royale size with Fortnite, and WSOE 4 went for the fast-paced action of Rocket League.

In the future, WSOE hopes to tackle fighting games and Blankenship said a fighting game would be coming “soon.” Other games on the WSOE’s radar include Apex Legends and Heroes of the Storm, eventually they hope to support 6-8 popular esports titles at any one time.

“We brought in production experts from traditional sports and introduced them to the gaming space,” Blankenship said. “We have people who have produced events for ESPN, Fox, the NFL, the UFC, all these mainstream brands.”

One of the key things the WSOE is bringing over from traditional sports is building up the fans relationship to players. According to Blankenship, that means finding the players who move the needle and building storylines around them.

That is one of the key benefits of the championship belt format, it naturally adds drama to a competition, even if the esports competitors aren’t as brash as your traditional fighter or sports athlete.

“When [esports players] get on camera, and you are interviewing them, they are just not as personable as like an Odell Beckham Jr. or a LeBron James,” Blankenship said. “Most of them just don’t have that. What we want to do at the WSOE is teach the fans more about the players and the team and create stronger fandom in esports.”

For Blankenship, that starts with trash talk. He uses the example of Conor McGregor. The outspoken Irish UFC fighter dominates headlines and news cycles even in the months separating his fights.

While developer sponsored leagues like Blizzard’s Overwatch League and Riot’s LCS may frown on smack talk, the WSOE encourages it.

“We can mix it up because we are third party. The championship format helps us separate from the developer-sponsored leagues, and the events we run won’t negatively impact their brands or the leagues they are invested in,” Blankenship said.

That trash talk will hopefully be on display at WSOE 6. Esports journalist Richard Lewis hosted WSOE 1 and after the event he went on his talk show and said he hopes that Team Serenity calls out the team they want to play for the belt.

Lewis will again be the host of WSOE 6 and hopefully, he can get the trash talk flowing between Team Serenity and the four new challengers over the weekend. For more on what to expect from WSOE 6, check out this event preview.

Dota 2 Hearthstone
Share
Mitch Reames
Mitch comes from a background in sports broadcasting at the University of Oregon, while there he competed for the U of O Hearthstone team and saw the potential for content at the crossover of sports and esports. In addition to Hotspawn, Mitch writes for SportTechie and the National Football Post. Follow him on Twitter @Mitch_Reames.
Follow me