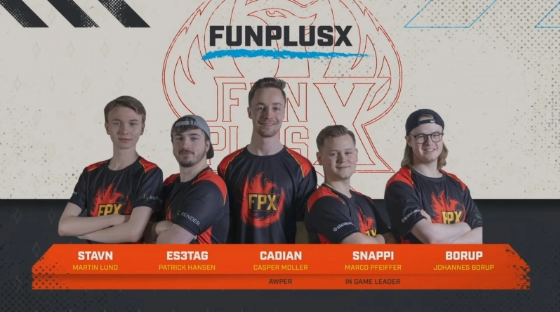 As a founding member, FunPlus Phoenix only played one match at Flashpoint. (Photo courtesy Flashpoint)

Ahead of the Flashpoint and ESL Pro League seasons, FunPlus Phoenix bought into Flashpoint as a founding member after seemingly purchasing the Heroic roster. After playing only one match in the league, the team then had to forfeit their remaining matches after Astralis signed Patrick “es3tag” Hansen to their roster, expanding to six players. It’s now come out that the signing of es3tag has actually halted the final negotiations of FPX’s buyout of the whole roster.

After forfeiting their Flashpoint match, FPX  removed all CS:GO related announcements from Twitter. Needless to say, FunplusX’s newest venture into Counter-Strike appears to be in danger.

The deal to acquire the Heroic roster was reportedly worth between 1.6 and 1.8 million dollars, according to French esports journalist Nel. The Heroic squad then had to forfeit their slot in ESL to pursue the FPX deal and join Flashpoint, but it appears that those players may be left in limbo if the deal falls through.

Es3tag will join Astralis on July 1st, after the completion of his contract with Heroic. But seeing as FPX have seemingly withdrawn from Flashpoint, and Heroic have left ESL Pro League, he won’t have any professional matches up to this point.

According to Astralis CEO Nikolag Nyholm, they offered to buy out es3tag, however when Heroic requested $800,000 for the final three months of his contract, Astralis “politely” declined.

In response to the roster change, Heroic CEO Erick Askered publicly accused Astralis of acting in bad faith. According to a statement provided to HLTV.org, Askered said, “I am unable to comment at this moment, as we are making legal preparations. This is due to the fact that we know and can prove that Astralis has acted in bad faith, and have considerably affected the sale of Heroic to FPX.”

In a press statement, Nyholm then stated that: “No actions here have been taken to the detriment of Heroic or FPX, and we have no insights into the agreement between the two. Our objective is to sign an excellent player upon his free agency and achieve our goals of performance excellence and player health.”

The Astralis Group believes that what they have done is acceptable and within the professional standards of esports.

Most sports organisations and it's quite commonplace in esports as well to allow for players to discuss with other teams 6 months ahead of contract expiry. We have been told by Patrick's agent that this is the case for him as well, otherwise we would not have been allowed.

Explained Astralis, in a press release. “A five player roster leaves no room for giving players a pause when needed for physical or mental recovery. In order to improve working conditions for our players, it has been decided to increase the Astralis roster to six players. On this basis, Patrick “es3tag” Hansen will be joining the roster July 1st, when his current contract expires.”

Should the deal with Heroic fall through, it is unclear what would happen to FPX’s involvement in Flashpoint. Some media outlets have circulated rumors indicating that FPX has not yet paid their buy in fee, however the CEO of Flashpoint Dan Fiden corrected this rumor on Twitter, explaining that FPX was not under any sort of trial period.

HLTV journalism is pretty hilarious. This “trial period” thing for FPX is not true, was never true. They did not reach out to Flashpoint to confirm it.

We can expect this situation to continue to develop over the next few weeks. Until then the future for Heroic’s current roster and for FPX is unclear.