The Five Best Places to Drop in Call of Duty: Blackout 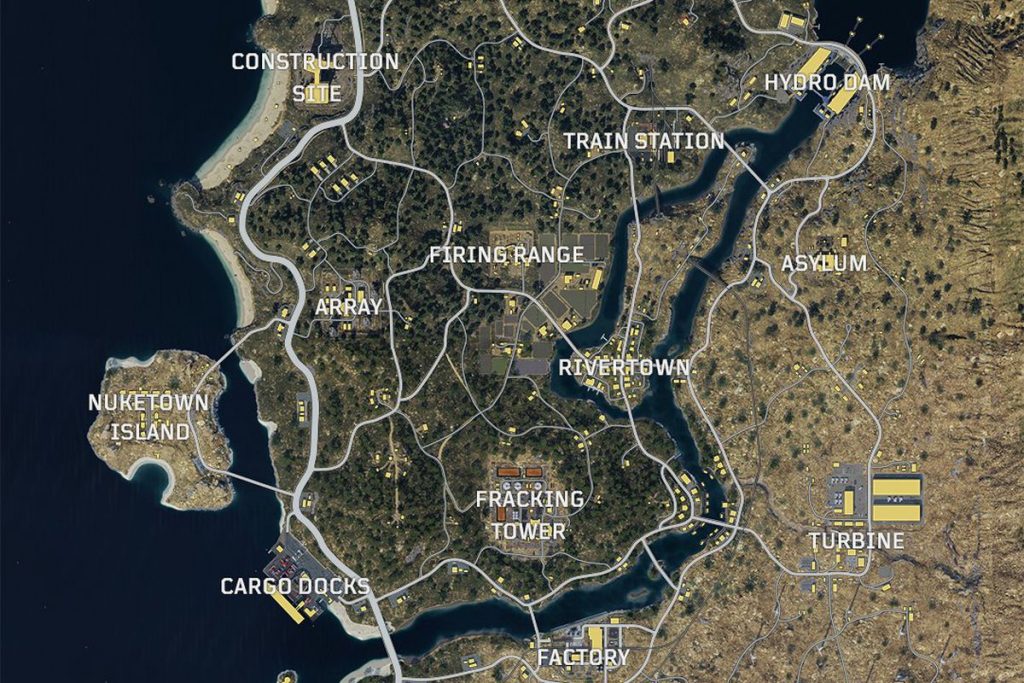 Not sure yet where to drop in Blackout? Don't worry, we have got you covered.

Call of Duty: Black Ops 4 dropped last week with three different modes; Standard multiplayer, zombies, and a battle royale mode named Blackout. Just like every other battle royale game, players drop onto the map out of helicopters and land safely at their targeted destination. One of the unique aspects of Blackout is that the map is a blended masterpiece of different Call of Duty levels and new areas to explore.

Blackout does not have a rarity system, per say, so players can pick up a gun, toss on a few attachments, and be ready for battle. You can find health, ammo, attachments, and more littered all throughout the map. There are different guns that are less likely to spawn in common areas, like the Koshka sniper rifle, but key locations are known to be “loadout goldmines.” There are a few areas that spawn zombies as well, which can drop loot and other special surprises.

This location on the eastern side of the map is known to be a zombie spawn location, which is shown by a bright beam a blue light into the sky. Players can browse through the two-story abandoned mansion for weapons or the creepy backyard maze for loot. There is also a chance of a loot box spawning in this location, usually on the top floor. If the loot box option is too direct for you, slaying zombies is another option for acquiring the ultimate loadout. Zombies have a chance of dropping powerful weapons from the Black Ops Zombies series like the Monkey Bomb or the infamous one-shot ray gun. Be on the lookout, as the undead are not the only threat you should be wary about. An enemy could be waiting in the next room, so stay frosty.

The most southern part of the Blackout map, the Lighthouse, is a gamble in terms of landing location. The circle can potentially land on the opposite side of the map which puts you at a disadvantage, but there is plenty of real estate to walk through. People who drop here can take their time as enemies tend to shy away from the Lighthouse as they prefer to drop more in-land. Head towards the lighthouse structure to try and find the level 3 armor spawn. After you are done you can drive off into the distance with the ATV that spawns at the end of the walkway.

The actual location of the Hydro Dam has two different spots that you can choose between; the control center towards the northwest and the hydro dam compound to the south. The control center buildings are filled with offices that hold several key assault rifles like the ICR-7 and Rampart-17. After you are done looting the offices you can head towards the south to clean up players who landed at the compound, or vice versa. The entire G2 block is full of opportunities to loot and kill with smaller houses sprinkled throughout the area.

The Construction Site isn’t the best place for loot, but it is the location layout that makes this spot prime for kills. Looting on the bottom of the construction tower and moving up and into the wooden maze is a great strategy. Zigzagging through the walls will make it difficult for enemies to deal damage. Once you equip your weapons, you will soon be at one of the best vantage points throughout the entire map. Players will be able to look down on their enemies while having an easy escape route. If you feel like a threat is approaching, you can jump right off the building and glide to a new location. The perimeter of the construction site is scattered with unnamed locations that have loot for you to pick up.

If you are looking for a location that will draw a lot of action, then this classic map reprisal might be your spot. Nuketown is one of the most popular Call of Duty maps to date, and the team at Treyarch decided to dedicate an entire island to it. There are several places to land on Nuketown Island, but I found that the southeast corner is usually light on initial enemies. There are a few buildings for you to scout, collect weapons, and prepare for battle. You can then move inwards on the island, or head towards the mainland. There is typically an ATV spawn towards the southeast. Can you find the secret sign that reveals how many players are alive on the map?