The Best Players from Worlds 2020 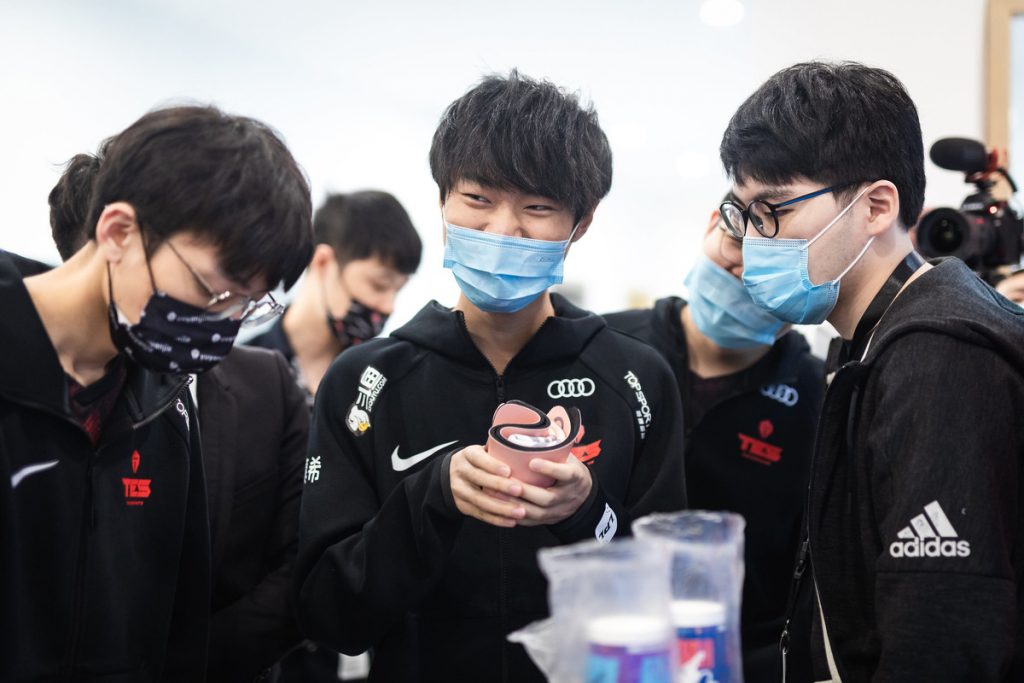 Top Esports was one of the hyped teams heading into Worlds, but did their star player back up the hype with his numbers? (Photo courtesy Riot Games / Yicun Liu)

Worlds 2020 may be over and done with, but now is the time to reflect on the importance of the event. Every Worlds championship is important for building personal and team hype heading into the next season. The other benefit is that Worlds can have a lasting impact on personal careers, by raising a player’s or a team’s value among fans and competitors alike.

This Worlds event has been no different, with storylines concluding in success, and players getting their time in the spotlight. Here are some of the big player storylines coming out of the event and how their statistics back them up.

Martin “Rekkles” Larsson perhaps had one of his best Worlds showing in his long and healthy career. The player found himself putting out impressive numbers all tournament, especially in a group so closely contested and dealing with the reverse sweep from Top Esports. Even with Fnatic losing three games in a row against the most favored team to win the event, Rekkles’ numbers are still insane.

The first big sign of his success at Worlds is his KDA. While KDA can be a tricky measurement for assessing success, the Swede managed to maintain a 7.6 KDA through 11 games played. He matched the best performing K/DA player at Worlds, Jang “Ghost” Yong-jun, who won the World’s championship with his DWG teammates. It is worth mentioning that Fnatic had a 54.5% win-ratio this event, with six wins and five losses. To maintain such numbers, even in defeat is worth mentioning. He clearly had a great micro and macro awareness to make sure he was not picked off and shutdown, causing his team to lose games.

In comparison to the roster’s Worlds Final run in 2018, Rekkles had an 8.9 KDA back then. While his 2020 KDA is down, Fnatic also had a weaker year as a team, and the Worlds meta slowed down the ability for marksmen to pop off early. This Worlds has been slow for the traditional carry roles, with the ADC and Mid both starting to earn kills at the 16-20 minute mark when teams are more likely to contest bot side objectives.

The other big point is that Rekkles is tied 8th with his support duo Zdravets “Hylissang” Galabov in first bloods at 45.5%. This is a sign that it was Fnatic’s gameplan to play off their strengths, and Rekkles’ KDA and lane dominance translated into game wins. The first two games of their quarter-final battle with Top Esports was a sign of this. The Fnatic duo won the laning phase against Yu “JackeyLove” Wen-Bo and Liang “yuyanjia” Jia-Yuan on several occasions. Not only is it a sign that Fnatic’s botlane has what it takes to match one the LPL’s best, but it also means Fnatic’s botside made their own luck in a meta that did not favour them. Not to mention going toe to toe with a former Worlds Champion still on the top of his game shows Rekkles has a place among other World-class Marksman.

Was Knight Worth The Hype?

Before heading into Worlds 2020, Zhuo “knight” Ding was the most hyped player to watch during the Main Event. During the LPL Summer Split,  he managed incredible stats, such as a 7.2 KD through a 13/3 Regular Season record. Ding also achieved 5.7 average kills a game, and 211 total kills and an LPL damage percentage high of 35%. In other metrics, he earned a high on solo kills with 22, and has the highest average gold difference at 2339 gold. With such feats under his belt, he earned the LPL Summer Split MVP, and was described as the next Lee “Faker” Sang-hyeok by many.

Top Esports’ star midlaner was the clear top dog in the LPL, but how did he match up statistically against Worlds competition? Ding did not have as much success as he was against the best the world had to offer, but his numbers still racked up.His KDA was 4.8, the 9th best throughout the entire event. Compared to other Midlaners he was the third-best behind Nicolaj “Jensen” Jensen on 5.8, and Heo “ShowMaker” Su on 5.4. In comparison to the two Midlaners above him, fans can make the argument that knight was the best Midlaner outside of the World’s winner. Jensen played six games, compared to knight’s 15, meaning he had fewer games to remain consistently good at.

But *who* is getting those kills?

Junglers benefit the most early on and are just barely beaten out by Mid Laners in the late game!

Another metric knight couldn’t compare well to was his damage percentage – however, this is not necessarily a bad thing. He dropped from a 35% damage percentage to a 21.9%, which is the 11th best of the 16 Midlaners at Worlds. While that is a massive slump in comparison, there are factors to consider. The role of the mid lane in the Worlds meta was a slow but steady build-up for the role, giving up early game priorities in favour of their Jungler to dictate the game. Midlaners only truly excelled in damage and kills by the later stages of the game, with their slow build-up occurring around 16 minutes. One other caveat is that out of the ten mids ahead of him only four got out of Groups. These four mids are Rasmus “Caps” Borregard on 26.3%, Xiang “Angel” Tao on 22.2%, and Tim “Nemesis” Lipovšek on 22.1%. Numbers-wise, knight matched Angel and Nemesis with his 21.9. Caps was the only player really excelling in the role and making it beyond Groups. Furthermore, the teams that gave their mid more room to carry tended to fail in their Group. Knight seems to have adapted to the meta and priority well. 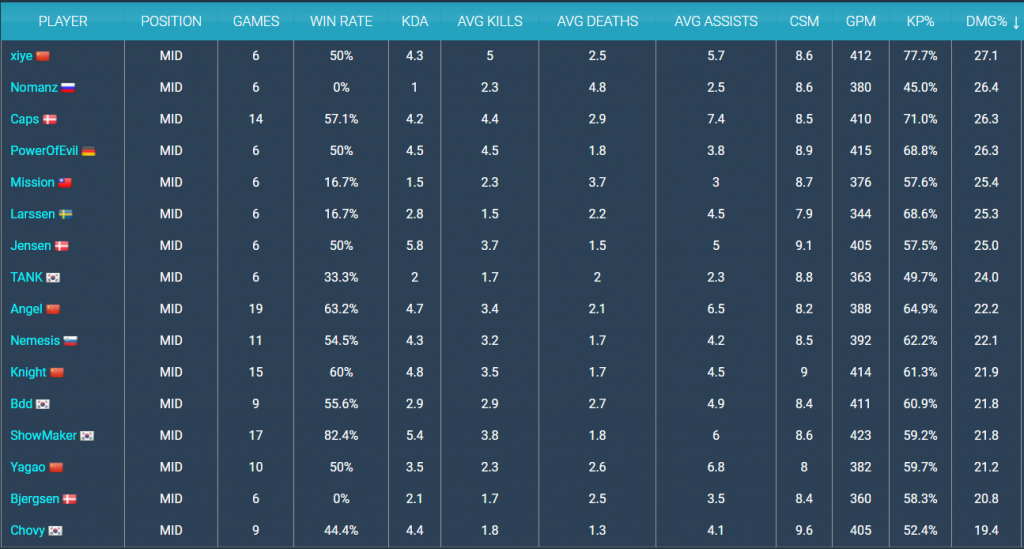 This is how Midlaners rank for damage percentage in the Worlds 2020 Main Event. (Photo courtesy gol.gg)

At first knight’s numbers appear to be a huge fall off from his Summer statistics, but if anything, knight adapted and fit the changing priorities of the metagame. Being able to adapt and survive an entirely different playstyle and still putting out great numbers is a sign of living up to expectations.

Ghost and Beryl Make Their Mark

As the hype for Worlds 2020 builds, fans and content creators start to break down who the best players are. While members of DAMWON Gaming found themselves on the list as individuals, DWG’s botlane only appeared on these lists as a duo. The reality is Ghost only joined the team in mid Spring, replacing Sin “Nuclear” Jeong-hyeon. Because of the gradual improvement and late introduction, Ghost missed out on essential Worlds storytelling, as DWG’s narrative has been building since late 2018.

But Ghost will not be missing out on the hype anymore. Ghost was one of the best performing players for KDA at Worlds and played a role in enabling Kim “Canyon” Geon-bu to take those super early Dragons.

Ghost’s stats have him tied with Rekkles on KDA, but he has it through 17 games on an 82.4% meaning he was the most consistently performing Marksman in team fights at Worlds. Also, Ghost has the highest gold per minute with 445. The result is mostly down to DAMWON Gaming’s ability to take leads in the laning phase through their committed team fighting style. Ghost then snowballs his playstyle when he mops up enemy champions during the mid-game’s bot lane objectives, and punishes opponents when DWG becomes massively ahead.

He and Beryl both play a role in why Canyon managed to secure such early Dragon control and Dragon Souls. Ghost has the highest average vision wards among Marksman players at Worlds. Beryl also has excellent stats, with him being the 5th best support at vision wards per minute and the 3rd best support with a 3.11 vision score per minute. In terms of Supports that escaped the groups, Beryl is the second best and first in those respective metrics.

DWG’s improved botlane is no doubt the missing piece that the team lacked in their quarter-final elimination in Worlds 2019. We should expect the DWG bot lane gaining more eyes on them for future events as people realize the value they brought to DWG’s well-earned lifting of the Summoner’s Cup.