Techies, Tiny and Two-Zeros at Day Two of Mad Moon 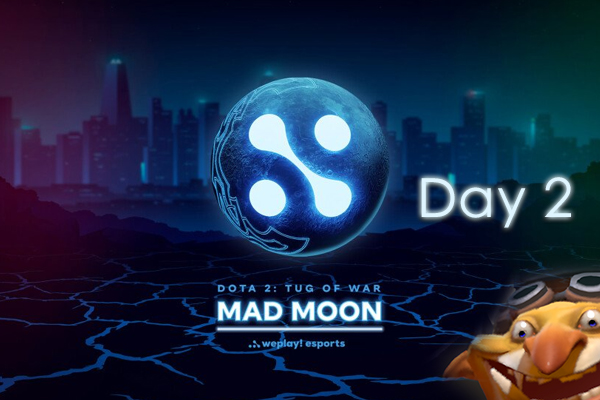 Day two of WePlay!'s Mad Moon tournament is complete as one team has already advanced to the Winner's Finals. (Photo courtesy WePlay!)

Day two of the WePlay!’s Tug of War: Mad Moon began with the end of group stage play, featuring two best-of-ones for seeding purposes only. WePlay! are becoming known for their pre-stream musical acts and the electrofunk ensemble proved to be an apt preview of these decider matches.

In the final game of Group A, B8 looked out of rhythm as Gambit systematically picked them apart enroute to an easy win. Dendi did his best to power farm his Templar Assassin to game-winning levels but was never given the chance to participate in a proper fight. Gambit found opportunity after opportunity to pick off B8 heroes and surgically worked the game into an insurmountable advantage.

Miracle-’s is anything but Tiny

Group B’s final match featured a funky draft from Aggressive Mode and a virtuoso performance from Miracle- on Tiny. Given a completely free lane by the AM offlane duo of Techies and Enigma, Miracle- bashed his way to a historically good game.

Rockin' Out: @NigmaMiracle is the first player on record to break 10k Net Worth on Tiny at the 14:00 mark in a pro @Dota2 match (3,342 Tiny games since TI5) @WePlayEsport pic.twitter.com/eRyq0N9o2e

Though it wasn’t a great match it was definitely fun to see Miracle- taking tier three towers through back-door protection less than 20 minutes into the game.

Right after the decider matches, we hopped right into the bracket stage where Gambit clashed with Aggressive Mode in round one. Gambit looked several steps ahead in both games, behind strong drafting and a clear strategic advantage. Effectively neutering Aggressive Mode from the laning stage it was Gambit who played the role of aggressors for a quick and easy 2-0. Aggressive Mode falls to the lower bracket while Gambit would move on to face Virtus.Pro in the semifinals.

In a somewhat bizarre scheduling choice, the semifinals between Gambit and Virtus.Pro took place just twenty minutes after advancing to the match. This time it was Gambit’s turn to play the role of the punching bag as Virtus.Pro smashed their CIS rivals in two sub-30 minute games. Though the scheduling didn’t do Gambit any favors, it was clear that Virtus.Pro had them outmatched and outgunned in this contest. VP looked cleaner than they have all season and while it is only one match, it is exciting to see the players evolving so rapidly into form.

On day three of Mad Moon we will return to the quarterfinals on the other side of the bracket to see Nigma take on B8 for a shot at Team Secret in the next round. One more team will also head home as the first lower bracket game will also take place between Gambit and the loser of Nigma vs. B8.