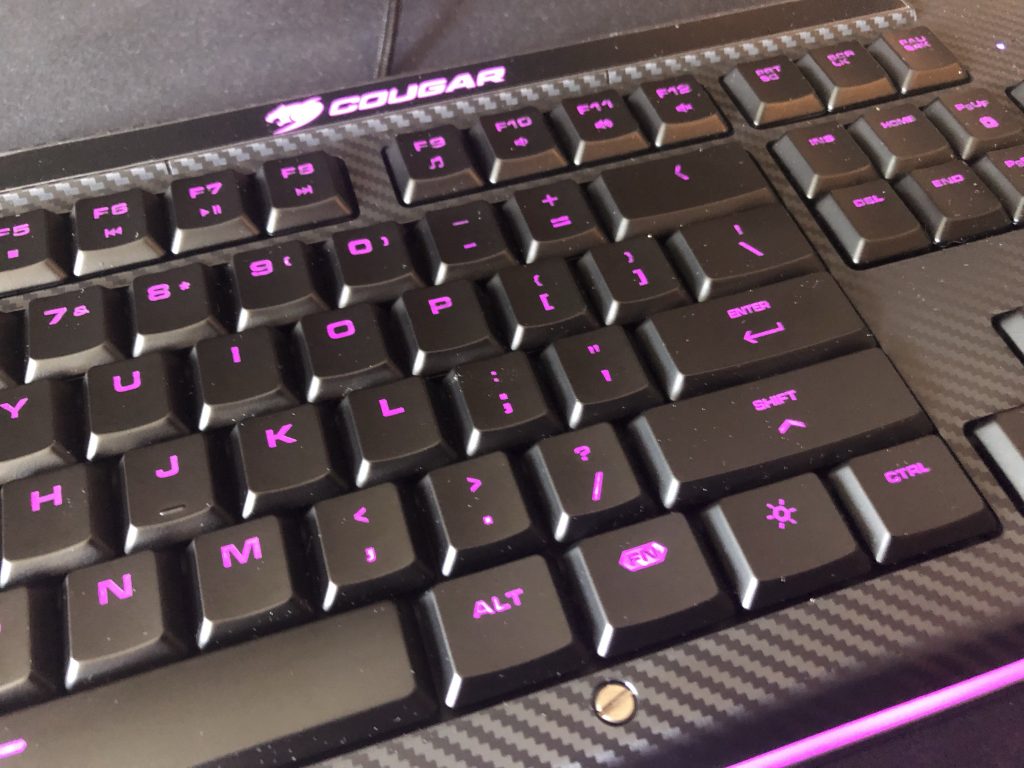 Keyboards are often low on our list of must-haves, especially when a flashy new mouse or gaming headset is calling your name. We’re often remiss about when we need to replace our keyboards because, unless (like me) you dump your coffee on your keyboard every year or so, it’s hard to tell if your keyboard is in need of replacement. Thankfully brands like Cougar have made a wide range of keyboards that are priced to accommodate a variety of price points so you aren’t breaking the budget when you need to replace your keyboard after a sudden coffee slip.

Cougar Gaming was kind enough to have me review the Cougar Aurora Keyboard to see how it holds up to my gaming needs.  I put it to the test by using it for some work and some of my favorite video games. I promise I won’t spill test it.

The design of the Aurora is pretty standard for a gaming keyboard – keyboard and numeric keyboard. The physical design of the keyboard has a “carbonlike” surface that gives the physical design a very cyberpunk appearance. The hatch-print design doesn’t have any raised areas so it’s not distracting to your thumbs or any keys that you might rest on the keyboard. There’s an added bonus of having some screws on the corners of the keyboard – adding to the cyberpunk aesthetic.

The physical size of the keys stood out to me upon when I took the keyboard out of the box. The keys are slightly larger than a typical keyboard, which, at first, felt like it would be harder to work with.

Transitioning from a keyboard that was slightly smaller to slightly bigger might have an impact on how it functions for the user- but more on that later. Besides being larger in size, every key has translucent detailing that illuminates the key when the backlight changes color. As it rotates through the rainbow, every key on the keyboard is illuminated. It’s a nice touch to a fairly practical, and lost cost, keyboard but design-wise it would’ve been nicer to see a function to change the colors or frequency of the color rotation.

The keyboard has a slightly inclined slope that shows off a running LED bar illuminated with eight colors that rotate. It’s a good overall side, and there’s been some care put into how it looks. Definitely minimal, but still shiny enough to entice us illuminated-gaming-paraphernalia lovers.

For the purpose of the review, I switched from a mechanical keyboard to Cougar’s Membrane keyboard. It wasn’t an easy switch as I’m used to having to apply more pressure to my keys as well as having a smaller key area to hit. That was definitely an adjustment period as I worked around the large keys. As the keyboard is about one-half to an inch longer, it definitely wasn’t a quick switch. But once I did, I found that the extra space didn’t really get in the way and if anything, my speed and my accuracy improved. It was a moderate 2 WPM increase – but it was still a good increase.

The keyboard functions similar to most keyboards, the hotkeys the same as most standard keyboards, and I could easily switch between French and English quite easily. Performance-wise, it has a very speedy response time and I found that the keys didn’t stick at all. It also didn’t have that annoying feature not allowing for multiple letters to be typed if you just hold down a key. I had a keyboard that did that once and I threw it out immediately. This girl writes far too much to not be able to delete quickly or hold down a key to type out my favorite “YASSSSSSSSSSSS” in a Discord server when my favorite Dota 2 or Overwatch team wins. I promise they keyboard can handle all the yassses and all the deleting you might need.

The biggest issue transitioning from smaller keys to the Aurora’s keys was that I found the larger keys so much more helpful. Seriously. Because I’m an avid Dota 2 and Dead by Daylight player, I either have to be hitting abilities with lightning-fast speed or hitting skill checks with precision. If I can’t do that with a keyboard, I won’t win any games. I’m happy to report that I didn’t have any of these issues with the keyboard. I didn’t miss my ultimate or abilities when playing Death Prophet mid which was a big plus. The keys being bigger didn’t correlate to being better at the game, but I did notice that on those off chances when I would’ve hit the side of the key (which correlates to worse response time), I was hitting it on top of the key instead. It’s a solid keyboard that fits most beginner gamer needs. I wouldn’t suggest using this keyboard for an Invoker player who uses macros, but you’ll still be able to defend the Ancient with it.

Cougar’s Aurora keyboard is a safe bet for any gamers who are looking for a stable keyboard without all the bells and whistles. It’s easy to transport and because it’s not mechanical you don’t need to worry about the challenges of replacing keys in the future. It’s low price-point means it’s not going to break the bank if you’re looking for a new keyboard and if you happen to dump hot coffee on it, you won’t be overly upset. I enjoyed both working with the keyboard, typed this review on it, and it handled my games well. I think it’s a great gift for a younger gamer looking to have the flashiness of the LED illumination and if something was to happen, you’re not having to replace a $150 keyboard.

Share
Gillian is Hotspawn's Communication Manager. She is also a lifelong gamer with a habit of getting distracted by random side quests, falling in love with fictional video game characters and forever buying wards as a position 5 in Dota 2. You can normally find her watching far too many Twitch streams to be human and rambling about esports community issues with a cup of coffee in hand.
Follow me