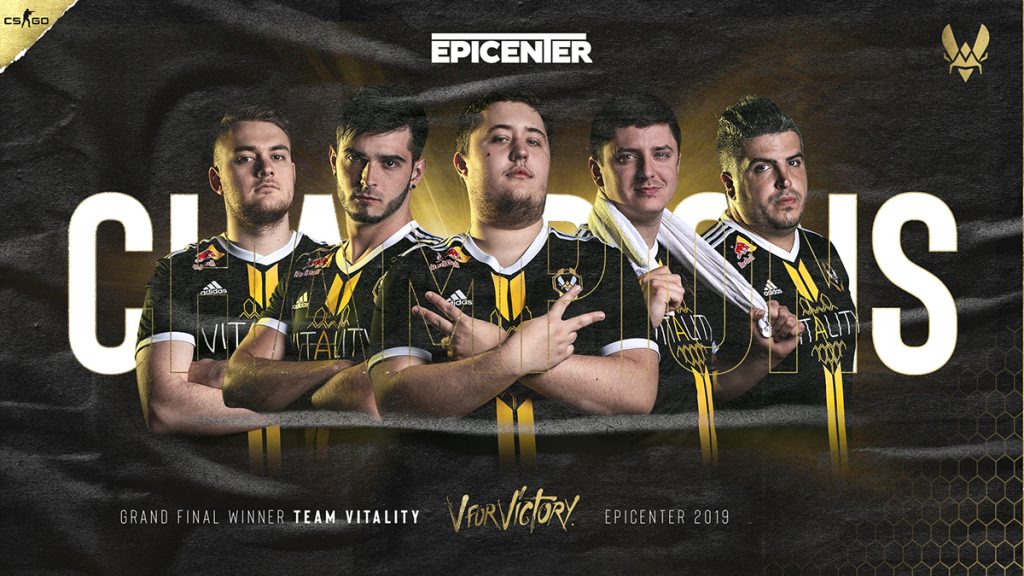 Though the entire team performed well, ZywOo put up a performance for the ages at EPICENTER 2019 (Image via Team Vitality)

The final Counter-Strike event of the year, EPICENTER, has come to a close. Team Vitality have come away with the trophy and $250,000 after defeating mousesports in the Finals.

Vitality’s run at EPICENTER began against the Chinese EHOME squad. After quickly dispelling them 2-0, Vitality faced off against Natus Vincere for a first-round bye. In the battle of Mathieu “ZywOo” Herbaut versus Aleksandr “s1mple” Kostyliev, ZywOo put on a clinic in the three-map match. With a 60-32 kill/death ratio (K-D) and 100.3 average damage per round (ADR), ZywOo and Vitality took the 2-1 victory.

The first playoff semifinal saw Vitality take on Heroic. While Heroic did get their preferred Vertigo pick, Vitality was ready for it. After securing 10 rounds on their CT side, the French squad took their opponents map 16-12. Vitality’s own map pick of Inferno was much closer in the first half. However, Vitality were able to pull away on their CT side by winning nine of 13 rounds. Another 16-12 victory put Vitality through to the grand finals. This time, in-game leader Alex “ALEX” McMeekin was the star of the show with a 58-36 K-D and 108.3 ADR.

Opposing Vitality in the finals was mousesports, who had all the momentum in the world. Mousesports were just coming off of three consecutive tournament wins at the CS:GO Asia Championships, ESL Pro League Season 10, and CS_Summit 5. Now, mousesports were hungry for their fourth in a row.

They would make their case on map one, Vitality’s pick of Inferno. While mousesports did go down early on their CT side, they won seven of the last nine rounds to end the half up 8-7. Vitality’s CT side proved strong, putting the French squad up 14-11 with a flourishing economy. Against all odds, mousesports put up four rounds straight against full buys to go onto match point. Vitality managed to stabilize in the 30th round and get to overtime. Despite that, mousesports quickly stole the four required rounds for the map victory, three coming on T side.

Vitality now needed to take mousesports’s map, Mirage, to stay in the series. That notion didn’t look promising after the first half, where mousesports went up 8-7 from their T side thanks in part to an amazing clutch from David “frozen” Čerňanský.

Mousesports also won the second pistol and three of the four ensuing rounds, putting themselves at 12-8. With their backs against the wall, Vitality had to mount a comeback. Thanks to the sheer fragging power of ZywOo, Vitality clawed their way back from their T side, winning a staggering eight rounds in a row to secure Mirage. ZywOo earned a 33-14 K-D and 125.2 ADR, carrying Vitality over the line.

Nuke was the tiebreaker map, and after winning the knife round, Vitality got to start on CT side. They set a blazing pace, winning 10 of the first 11 rounds. Mousesports did have a four-round resurgence at the end of the half, but Vitality was primed to close the map out. On their T side, Vitality won four of the first five rounds. After a clutch from ALEX, Vitality made it to tournament point and closed out Nuke 16-9.

In the final map, every member of Vitality came alive at some point. It wasn’t just the ZywOo show, as every player carried their own weight, leading to the most one-sided map of the finals. Still, ZywOo was awarded the tournament MVP for his consistently amazing performance.

Our one and only, MVP of the #EPICENTER CS:GO

While mousesports weren’t able to complete their end of the year sweep, winning three out of four attended events and making grand finals in all of them is nothing to scoff at. They are still one of the hottest teams in Counter-Strike and will be stronger than ever in 2020.

For Vitality, this win at EPICENTER marks their first trophy since ECS Season 7 Finals in May. They’ve come close to more hardware numerous times but weren’t able to take any tournaments in these past six months. Now, EPICENTER belongs to Vitality and is their first win since they picked up Richard “shox” Papillon. Vitality’s ceiling is certainly high, as evidenced by the final map. If all of their pieces are firing on all cylinders, the French giants are still one of the strongest teams in the game.

No one knows what 2020 will hold for Counter-Strike, but for now it is time to rest. Teams and tournaments will be back after the holiday break, ready to usher in a new decade of CS:GO.