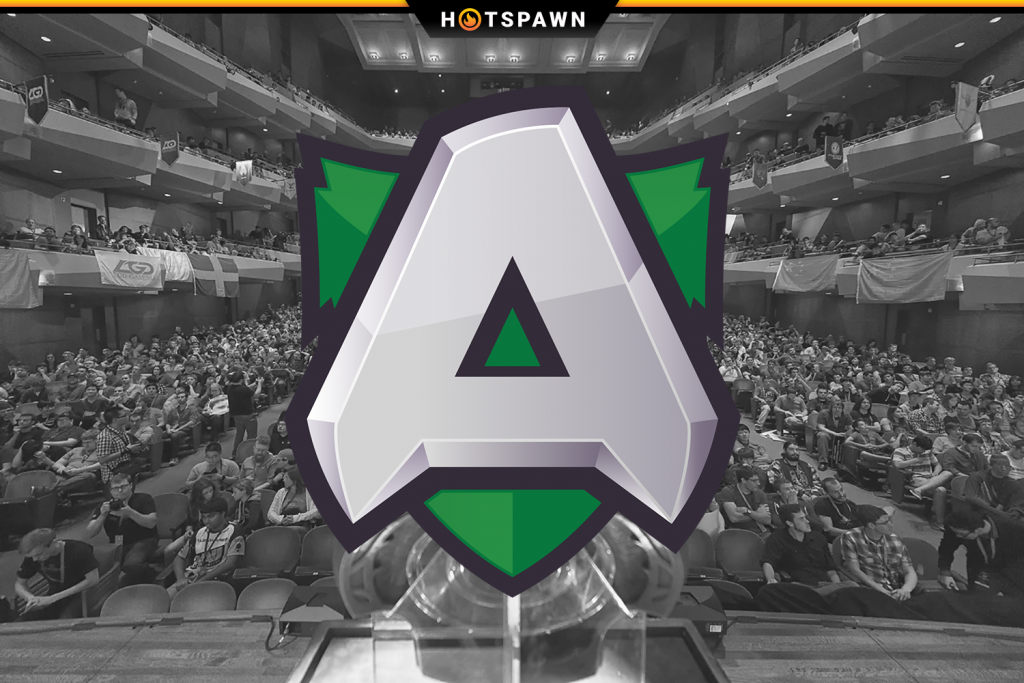 Alliance have always thrived when it's lineup has been consistent - The team has tried to replicate its TI3 winning formula again and again.

Through it all, Alliance have kept a unique vision of what a championship-winning team is. Five players who consistently play together, without the chopping and changing that usually goes on with a roster. Thanks to this, Alliance has maintained a consistent form despite several very recognizable transformations. Each lineup is a constant, and when one player goes, all of them do. That was the secret to Alliance’s early success, and hopefully, it’ll be their path to renewed victory.

Before there was Alliance, there was No Tidehunter. Originally consisting of Jacky “EternaLEnVy” Mao, Dominik “Black^” Reitmeier, Harisson “Kizzles” Chang, and Swedish duo Henrik “AdmiralBulldog” Ahnberg, and Gustav “s4” Magnussen, this early Dota 2 team began life while Dota 2 was still in beta. With players who were, for the most part, already veterans of the original Defence of the Ancients, No Tidehunter grabbed more than a dozen victories after Dota 2’s debut at TI1.

But the team’s most infamous moment would come at Dreamhack 12. Freshly reinforced by Joakim “Akke” Akterhall, and new captain Jonathan “Loda” Berg, No Tidehunter would shock the world with a phenomenal win at DreamHack Winter 2012. This event was close to being on-par with The International in terms of prestige, at the time, and victory here put this stack on the map.

But even as wins racked up, the identity of the team was still forming. EternaLEnVy was very much the odd-one-out in this otherwise entirely Swedish roster. After his departure in late 2013, the team would move on to a new wave of victories, and signing the final Swedish puzzle piece, Jerry “EGM” Lundkvist, was just the beginning. 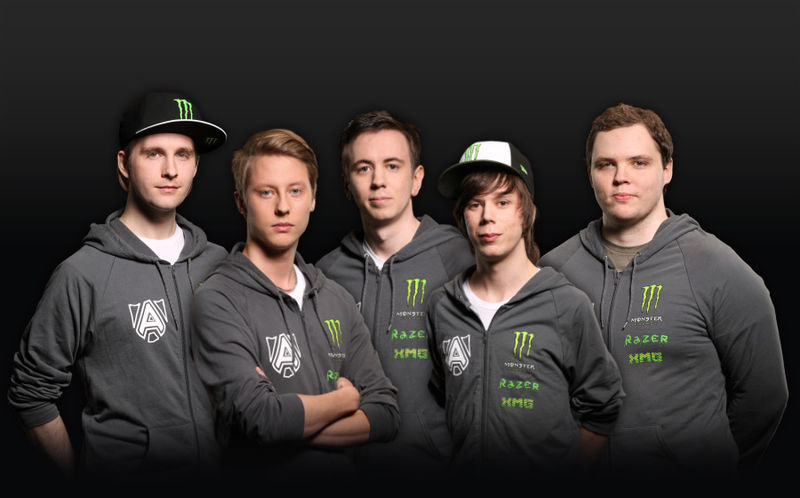 The early history of Alliance is filled with swift success and decline. (Photo courtesy Valve)

Alliance sprang into being with a whirlwind of activity. Initially founded in mid-April 2013, a collaboration between Alex “ottersareneat” Garfield and peripheral company Razer, the team boasted top sponsors. They’d add championship-caliber players to this formula with the signing of the former No Tidehunter roster. Just over a month after their founding, the team crushed in the G-1 Champions League Season 5, before continuing on to win five tier-one tournaments in just their first few months.

But it didn’t stop there. In a genuinely incredible run through The International 2013, Alliance went undefeated in groups. They remained unbeaten in their opening playoff game, handing a 2-0 loss to LGD Gaming and advancing to face Team DK. Pushed to the limit against some of China’s strongest players, including the legendary Xu “BurNIng” Zhilei, and Xie “Super” Junhao, the team barely snuck through in a close 2-1 victory.

From there, it was smooth sailing. The team quickly dispatched Na’Vi, the TI1 champions, looking like a shadow of their former glory. After Na’Vi’s trip to the lower bracket, it was on to the Grand Finals, and Alliance sought to quickly crush their opponents, with a 15-minute stomp to start the series. Na’Vi shot back with a pair of victories of their own, using the incredible support potential of Io to scale their Alchemist pick to the moon. But in a game where picks and bans can be fatal, Na’Vi’s reliance on the Alch allowed Alliance onto their comfort picks. With their backs against the wall, Alliance rallied to pick up a final two victories and secure The International 2013 championship, raising the Aegis less than half a year into their existence.

Alliance had secured the top spot in the entire game and were poised to continue the run. The squad initially looked good throughout the end of 2013 but fell just short of the gold at StarLadder StarSeries Season 7, the MLG Championship Columbus, and the DreamLeague Kick-Off Season. Despite always seeming to find a way to the semi-finals of events, the Alliance team of 2014 never reached the heights of those first three months of success.

Through it all, the team remained consistent. Loda, S4, AdmiralBulldog, EGM, and Akke stayed together through thick and thin. The team headed into TI4 with high hopes to recapture the magic of the previous season. But it was not to be, as the team floundered and failed to make it out of groups. Even with the confusing format of that event, the decline in quality was evident. This wasn’t the same level of squad that had won it all the previous year.

Something had to give, and Akke and S4 left the team after the TI4 disappointment. The team tried unsuccessfully to fill the gaps with picking up Johan “Mynuts” Andersson Sébastien “7ckngMad” Debs (Ceb), and Per Anders Olsson “Pajkatt” Lille over the course of the next year to try and recreate the magic. But it just wasn’t the same. After failing to even qualify for TI5, Loda spoke out on the squad’s woes:

“If we had qualified, then we have the confidence as a team to know that we can compete with the top 16 teams in the world. But if you don’t then it literally tells you that you’re not good enough and then you start thinking about what do we have to change to be good for the next season. And in some cases, to be brutally honest, maybe we will switch some players.”

But the switches the team had in mind were a little more familiar than the squad might have expected. For 2016, Alliance returned to a much more familiar roster. Resigning s4 after TI5, and bringing EGM back into the fold in December, Alliance was back to its original TI3 winning lineup. But the team floundered at Majors and barely made it into the qualifiers of TI6. On the mainstage, Alliance would barely escape groups and headed home after a single playoff match. The original roster had tried and failed to recreate the magic again and again, and it was time for something very different. 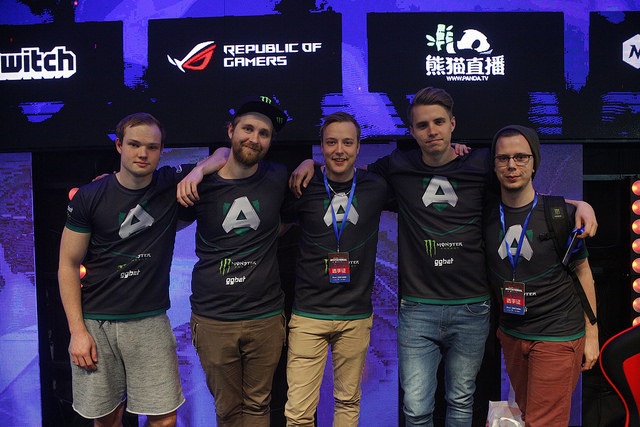 2016 saw the start of a new era for Alliance. (Photo courtesy StarLadder)

After TI6, something had clearly changed. In August, s4, AdmiralBulldog, and Akke departed the lineup. To replace them, the team recruited Simon “Handsken” Haag, Linus “Limmp” Blomdin, and Jonas “jonassomfan” Lindholm.

But more than that, the entire structure of the organization began to be altered. Alex Garfield, the original owner, stepped away from the business in December. Loda and AdmiralBulldog, who had since become a full-time streamer, took the reins as Co-Owners. The organization, now wholly (former) player-owned, set about rebuilding a roster around newer talent. The squad also signed Axel “Pablo” Källman to replace a departing EGM.

It was a clear end of an era and a time to try something new, and initially, that seemed to be the perfect plan. But good results were few and far between, and team captain Loda was forced into a break from competitive play in June, with the team adding Adrian “Era” Kryeziu as a replacement. But this experiment was to end all too soon. After failing once again to qualify at TI7, it was back to the drawing board for Alliance.

Loda returned to the scene and recruited around himself a young and talented lineup of new players. Of these new members, which included Michael “miCKe” Vu, Samuel “Boxi” Svahn, Aydin “iNSaNiA” Sarkohi, and Tommy “Taiga” Le, none had even been a part of the competitive scene when Alliance won their TI championship. It was a genuinely fresh start and something that Loda committed to building.

The Co-Owner stepped down from the squad ahead of TI8, with Max “qojqva” Bröcker joining. Loda would coach, while Alliance would develop and slowly but surely, the team began to flourish. Despite failing to qualify for TI8, the team was clearly improving, and throughout 2019 turned heads with finals finishes at multiple Minors and Majors. By TI9, this was a fully realized roster, and something that Alliance could genuinely build with. A lower bracket elimination by Royal Never Give Up was still a better performance than any Alliance team had given in half a decade, and the team looked poised to flourish.

Sadly, following TI9, the stack of miCKe, qojqva, Boxi, iNSaNiA, and Taiga simply got a better offer. Details at the time were sparse, but it was noted on Alliance’s Twitter that the team was in negotiation with the players. In the end, though, the roster was lured to Team Liquid, who found themselves in need of a new lineup following the departure of their entire squad.

A month later and Alliance found its new form. Limmp would return to the lineup as a two-position, with Nikolay “Nikobaby” Nikolov becoming the primary carry. The latter had impressed during a run with Mineski at TI9 and was primed to become a top talent in the Dota 2 scene. They were joined by Neta “33” Shapira, veteran Adrian “Fata” Trinks, and another familiar face in Handsken. This lineup shocked everyone with a debut win at DreamLeague Season 12, with the team lifting the trophy after dispatching the former Alliance, now TL, roster.

WE DID IT , my boys are warriors pic.twitter.com/bz5nXGHxvJ

As the global Coronavirus pandemic began to affect Dota 2, so did it affect Alliance. The team decided to part ways with Fata and 33, partly because of connection difficulties due to the online nature of events in the pandemic. In their wake, the team signed another returning player: s4, who’s also taken on the captain role, while a permanent five position is found. For the time being, the squad relies on Artsiom “fng” Barshak, a loan from Gambit Esports who’s stepped up admirably.

This latest incarnation is a deadly combination – A mix of old and new, with enough talent from a promising young roster, combined with some of the most skilled veterans the team could muster. While their success, and indeed playtime together, has been somewhat limited, there’s been flashes of brilliance. Will they live up to the TI winning legacy? Or flounder like rosters before? But more than anything, will this roster where Alliance decides not to stick it out despite difficulties? So many prior lineups for Alliance were milked almost to death before the team gave up. Others had no chance before they dropped them and moved on. However, if the team takes a different approach, it may be their chance to finally recreate the glory of the past.