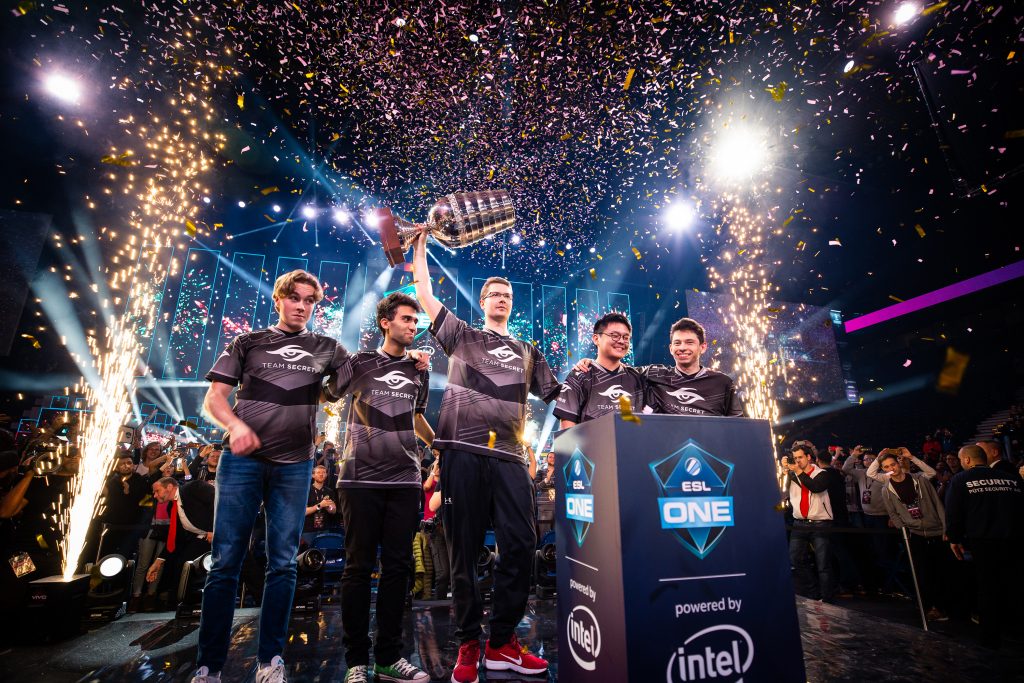 After a back-and-forth Grand Finals, Team Secret came away with the win at ESL One Hamburg (Copyright: ESL | Adela Sznajder)

ESL One Hamburg concluded on October 28 with a 3-2 victory for Team Secret over Vici Gaming. The European squad took home a cheque for $125,000 (US), the trophy and bragging rights.

The Grand Finals started with a back-and-forth game. Team Secret took an early lead. Vici Gaming made a solid comeback only to have Team Secret snatch victory in the end. Vici Gaming followed up by winning a 60+-minutes-long game two and then game three, punishing Team Secret’s persistence in drafting the Phoenix and Brewmaster combination twice in a row. Game four went Team Secret’s way, due in part to a very farmed Terrorblade.

In game five, Vici Gaming snagged the Phoenix and Brewmaster. They also drafted Tiny, Ogre Magi, and took the Terrorblade for themselves. Team Secret went with Silencer, Magnus, Rubick, Troll Warlord, and the Monkey King, which the analyst desk heavily debated versus Timbersaw. The Monkey King, played by Yeik “MidOne” Nai Zheng, was shut down in the mid lane early, putting Team Secret on shaky ground. However, a game-changing moment happened during a Vici Gaming Roshan attempt at 17:00.  Ludwig “Zai” Wahlberg on the Magnus blinked into Roshan’s Pit, caught four Vici Gaming players with Reverse Polarity and Skewered them out of the pit to be killed. It was the turning point. Team Secret went on to win the game and consequently, the tournament.

The MVP award for ESL One Hamburg was given to MidOne. He will also receive a Mercedes-Benz car valued at €50,000. MidOne put in an impressive performance on thirteen different heroes over twenty-five games, dominating especially on Invoker, Phantom Lancer, Kunkka and Timbersaw. He ended the tournament with a solid 4.6 KDA (kills and assists per death).

The ESL One Hamburg broadcast also included a cosplay competition. The top ten were presented on October 27. The winner, rehabGNaked, wore a detailed Ember Spirit costume that she had upgraded from its debut at The International 8 with facial hair and a pair of very memorable swords.

gonna be on stage with the #ESLOne cosplay top 10 after the VG-VP series! #ESLOneCosplay pic.twitter.com/P0nk81SPgd

ESL One Hamburg honored John “TotalBiscuit” Bain by inducting him into the Esports Hall of Fame. Bain is the first individual to be inducted who has not been a professional player. In a brief speech, Paul “Redeye” Chaloner recognized Bain’s contributions as a commentator, critic, and supporter of esports.

Of the competitors at ESL One Hamburg, several will go on to compete in the next prominent Dota 2 tournaments, all Dota 2 Pro Circuit events. CompLexity Gaming will compete at DreamLeague Season 10 from October 29-November 4. Nine teams of the ESL teams, including Team Secret and Vici Gaming, will compete at the Kuala Lumpur Major in a field of sixteen teams. It will run November 9-18.