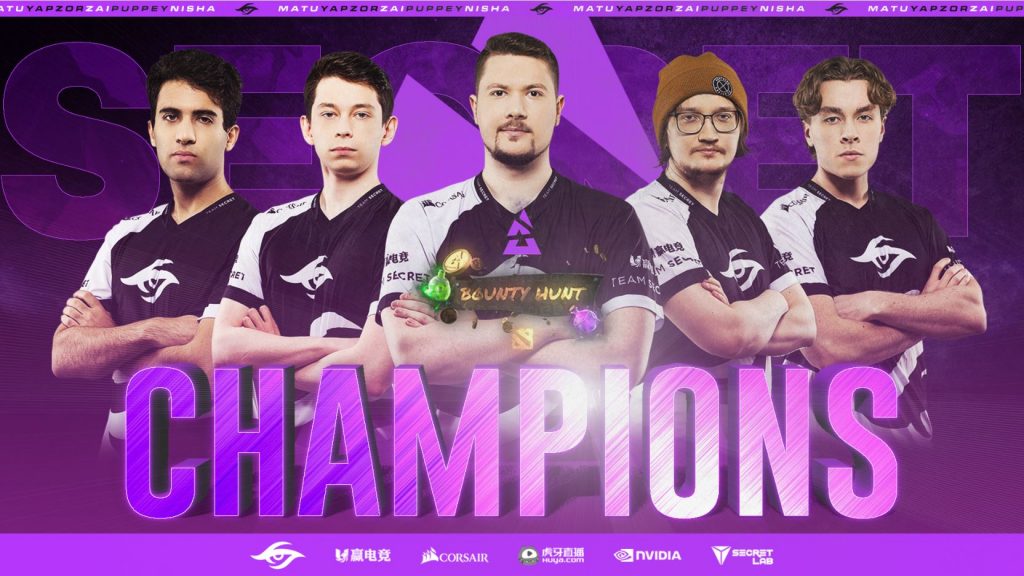 After five consecutive victories in five straight tournaments, is there anyone who can stop Team Secret? (Photo courtesy Team Secret)

Team Secret have defeated OG in the Finals of the BLAST Bounty Hunt, securing yet another online victory. The win caps off yet another successful showing for Team Secret, making this five events in a row they’ve been triumphant in.

It’s a genuinely unprecedented streak, marred only by the exceptional circumstances under which it happened. What’s more, this is their fifth 3:0 finals victory, proving that when this team is under pressure, they don’t feel it, don’t get shaken, and just win.

The BLAST Bounty Hunt managed to add some much-needed variety into a tournament schedule that has occasionally felt far too vanilla. With the rapid succession of online events, the Bounty Hunt’s special events, bounty system, and prize-pool stealing ruleset made it stand out in the face of so many GSL-groups-into-playoffs format tournaments.

The prospect of not only losing, but having 40% of your active prize pool taken away, was more than enough to make even the most one-sided early bracket game feel like it had high stakes. Some of the bounties were a little too steep to go for, with the “Something Something Feeder” bounty requiring you to kill one player 20 times in a game, but even so, they added something new to proceedings.

While critics could point to the format being reminiscent, if not derivative, of Midas Mode, this event’s clean production and tier one-level tournament stylings helped make sure it felt like its own thing. It also led to an unusual situation where Alliance, who dropped out of the tournament in fifth place, still went home with more of a prize ($12,560) than fourth-place Team Liquid ($8,424), thanks to securing the “What’s Mine Is Mine” Bounty early in the event.

But more than its unique format, the tournament has been a welcome boost for two of the most popular squads in the scene – Team Nigma and OG. Every event of this spate of online tournaments, we wait and see whether these two teams are going to play to the potential we know they have. So to see them grabbing a third and second place spot respectively was a treat.

Nigma’s performance in this event has reminded us all of what a potent force this lineup can be. At times their form reminded us of nearly unstoppable runs through events in 2019, albeit with the sadly familiar “just falling short of, or in, the finals” result.

What’s more, OG finally had a chance to test their full lineup against Team Secret, something they missed out on in all of their previous online meetings.

It's the game we've all been waiting for at #BLASTDota

During their successful run to the finals, it was Martin “Saksa” Sazdov’s Windranger that turned heads. The player has been a regular part of the ever-changing roster during these recent online tournaments, but this time the four-position player was the focus of so many highlights. Catching out opponents Alliance with clutch shackles on multiple occasions, he was the driving force over OG’s first Upper Bracket victory.

It happened yesterday in #BLASTDota Bounty Hunt and we felt like it deserved its very own clip.@Saksadota with the Shackle mania highlighted by 🗣️ @ODPixel and 🗣️ @Foggeddota.#DreamOG pic.twitter.com/UwCNyEk88o

But OG would hit a wall in Team Secret in the following round. Despite a decent showing in game two, it was Secret who would take the win. Given the result in the final, Secret was perhaps just testing things out in this matchup. A lost game here, and there didn’t seem to matter. But at least this loss led to OG heading to the lower bracket, and sweep of Nigma. They’d get one final chance to defeat Team Secret.

“Team Secret Wins” is the headline start everyone is getting used to writing. The squad looked almost flawless in their run through the Upper Bracket, dropping just one game to OG in their semifinal meeting. It’s again Secret’s supports that have been the stars of the show. Perhaps because their carries are so clean, it’s Clement “Puppey” Ivanov and Yazied “YapzOr” Jaradat who can create the highlights.

Heading into the finals then, it less a question of whether Secret would win, but how. In an attempt to counter Secret’s playmaking supports in the first game, OG opted for a brutal combination of Troll and Oracle in the top lane, securing several early kills. However, many of these were trade kills, meaning when Secret roamed mid, they quickly killed Topias Miikka “Topson” Taavitsainen and took the first tower. With this lead, Secret could control when and where they fought, and even some tough engagements from OG only helped their opponent gain more of an advantage.

Following a full-time wipe of OG, Secret took an uncontested Roshan. With no pressure from OG, Secret could begin to siege the high ground, and by 22 minutes, the game looked well in hand. Sure enough, in short order, it was 1-0 Team Secret. Thanks mainly due to an insanely farmed Puppey and OG getting nothing from their lanes.

Trying to reset for the next game, OG went for even more solid lanes, with a Beastmaster/Enchantress/Pugna combination, while securing their late game with the Spectre. But immediately upon entering the match, Puppey, and co. chased down OG’s lane for a pair of kills. Keeping both supports bottom, Secret attempted to grab another kill, only to find themselves in a tri lane. This 2-0 kill lead almost immediately spiraled into a 5-1 advantage, and 2k gold to boot. But OG wasn’t about to roll over and die. A coordinated collapse top managed to clean up both of Secret’s cores and started to give the team hope.

However, these kinds of ganks wouldn’t work where Team Secret had vision – which happened to be across the majority of the map. As a result, OG’s repeated attempts to replicate this success would fall flat. At an eerily similar time as the first game, Secret was able to take Baron Roshan again, and push into OG’s high ground. Another dominating performance from Team Secret to bring it to 2-0

With the tournament on the line, OG took away Secret’s Luna and banned away some of the support heroes their opponents had been comfortable with. But Team Secret’s hero pool is anything but shallow, and a Clockwerk and Ancient Druid. The squad looked like they were tilting more into a late-game composition, and OG might have had a chance to secure the lanes. The only thing in their way: Secret’s incredibly consistent players, and their wildcard in the support Weaver for Puppey.

A more passive start allowed Lasse Aukusti “MATUMBAMAN” Urpalainen to get a really comfortable lane, despite a seeming disadvantage. Meanwhile, OG’s play rapidly turned to desperation, with them diving towers for trade kills. Secret took their first tower at 11 minutes and didn’t show any signs of slowing down. Puppey’s Weaver had more farm than Topson, and a bad state for any mid to be in compared to a hard support.

Ultimately this was a one-sided stomp of a finals. Team Secret are unparalleled at the moment; there’s no one even close. It showed in how strong a Luna on their team was, versus any other. Their carries are seemingly flawless, able to take on unfavorable matchups without any trouble, and their supports can pick any hero they like and still out farm most of their opponent’s cores. This, combined with amazing drafts, make this stack almost impossible to play against.

Welcome to another session of 0-3 by @teamsecret anonymous, we have a new member with us today.@OGesports would you like to share? pic.twitter.com/O51fE31juT

But it doesn’t stop there. On June 15th Team Secret are headed to BEYOND EPIC looking for their sixth tournament win in a row. Judging by their current level of play, they have an excellent chance of succeeding, and you can catch all the action from this event on Beyond The Summit’s official Twitch Channel.