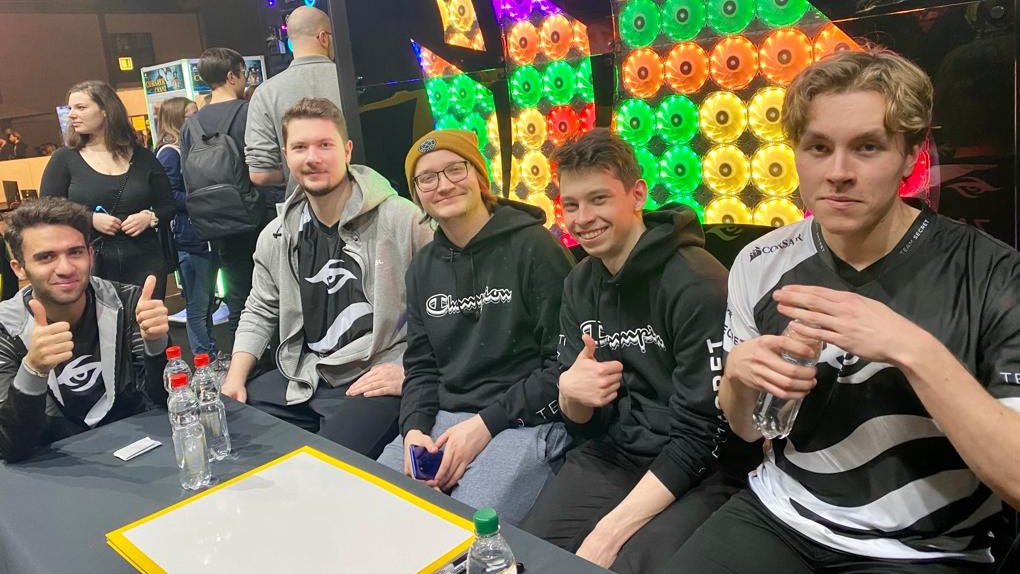 It’s official; Team Secret is in the Grand Final of DreamLeague Season 13: The Leipzig Major after defeating Vici Gaming in the Upper Bracket finals. What’s more, their opponents in the Grand Finals have now been narrowed down to either VG or Evil Geniuses. The team will be decided at the lower bracket finals Sunday.

The Leipzig Major has been a fantastic event so far, with live musical performances preceding the games, inter splicing of video packages, cosplay, and intermission skits. All these high-production-value details culminated Saturday in a dramatic conclusion to the feud between DreamLeague’s panda mascot and host Rich “Rich” Campbell. It’s been a hugely entertaining affair, and the finals promise to be even better.

Before we delve into the potential scenarios for Sunday’s final, let’s take a quick breakdown of how we got here:

Alliance Goes for Boom or Bust

It’s been an incredibly exciting tournament thus far, packed with twists and turns. Virtus.pro had a poor performance with an early exit from the event, and beastcoasts surprised everyone with an upset against Nigma.

Alliance and Team Liquid put on an amazing show, with a tight first game that was ultimately decided by a single catch. However, the second game was far less competitive, with Alliance seemingly botching a draft before TL handily defeated them. A back-and-forth match was expected, as both teams have been incredibly impressive this tournament. Alliance’s usual hyper carry tactics have borne a lot of fruit, while TL’s overall play has been stellar.

After their second game loss, Alliance immediately bounced back with a fully realized draft, eliminating TL after a 34-minute stomp. The major component of this was Nikolay “Nikobaby” Nikolov’s build on Slark and Neta “33” Shapira’s Doom pick, which both proved incredibly effective in their lineup.

EG’s Rise to the Top

Elsewhere on the Leipzig Major tournament bracket, Vici Gaming was heading to the lower bracket after 0-2 loss to Team Secret. Their opponents Sunday would be the winner of Alliance vs. Evil Geniuses. The North American team has been a shining beacon of hope for a region that’s struggled with success in Dota. Alliance will be one of their most challenging opponents yet.

A guaranteed spot in the final day is at stake in this BO3 against Alliance. We're looking to build on a strong showing yesterday to book our spot in the final three! #LIVEEVILhttps://t.co/ZNI2rbXzgI pic.twitter.com/b3joeaEx7N

With Abed Azel L. Yusop on Templar Assassin, it looked like the team was poised for a quick victory. Ultimately though, it was Roman “RAMZES666” Kushnarev on Timbersaw carving through his opponents. Alliance seemed to be making constant communication mistakes. What’s more, EG seemed to have figured out the not so secret formula to defeating Alliance, which is shutting down Nikobaby.

Game two was more of the same, with Abed once again on the Templar Assassin, and this time he very much was the star of the show. In a decisive display, the team rolled Alliance and emerged victorious after a critical fight around Roshan. EG now has a tonne of momentum heading into their game Sunday, and they’ll need all the help they can get to take down VG.

In their matches against Team Secret in the Leipzig Major Upper Bracket finals, Vici Gaming looked less than confident, and it led to their loss. VG is a team that does everything right almost all the time. But if VG has a weakness, it’s their lack of risk-taking. Because of this, they weren’t able to come back in their first game. Team Secret’s Earthshaker pick was just too disruptive. The Chinese squad gave up too many objectives and deaths and then weren’t prepared to take gambles to come back in the game.

《#DHDL13 #LeipzigMajor》
GGs for today!
Come tomorrow, we'll be facing the winner between @theAllianceGG/@EvilGeniuses in the LB Finals for a spot in the Grand Finals, where we hope to meet @teamsecret once again!#VGFighting

The story was similar in game two, albeit in a slightly longer fashion. After banning the Earthshaker and Arc Warden, who had demolished them in the previous match, VG slowly gave up ground against their opponents. By the time they were able to convincingly fight, it was already too late. Team Secret’s team comp was a brutal team fighting mix, capped off with a Faceless Void for carry Lasse Aukusti “MATUMBAMAN” Urpalainen. VG’s normally stoic demeanor crumbled in the face of this onslaught, and come Sunday, they’ll have to regain some of their former potency to survive EG and head to the finals.

Team Secret has returned to the dominant form we expect from them after a disappointing show late last year at the ONE Esports Dota 2 World Pro Invitational Singapore. The big change has been the team’s attitude. There’s almost a cockiness about them, both in their out of game appearance and in-game picks and play. The Earthshaker pick, the full engage comps, and willingness to take chances on heroes their opponents won’t play has led to this point.

Their dominance is further compounded by the slick drafting of captain Clement “Puppey” Ivanov and coach Lee “Heen” Seung Gon. In some games this tournament, Team Secret has simply won the match before it even started, out drafting opponents with simple unity of purpose.

In the finals, whether they face Evil Geniuses or VG again, it will be up to Secret to retain this confidence and translate it into wins. While for their opponent’s, it’s essential they break Team Secret’s rhythm and throw them off their game. The Leipzig Major Lower Bracket will begin Sunday at 10:30 a.m. local time, with the Grand Finals to follow. You can catch all the action on the official DreamLeague Twitch channel.