Team Secret Pushed to the Limit in Leipzig Win 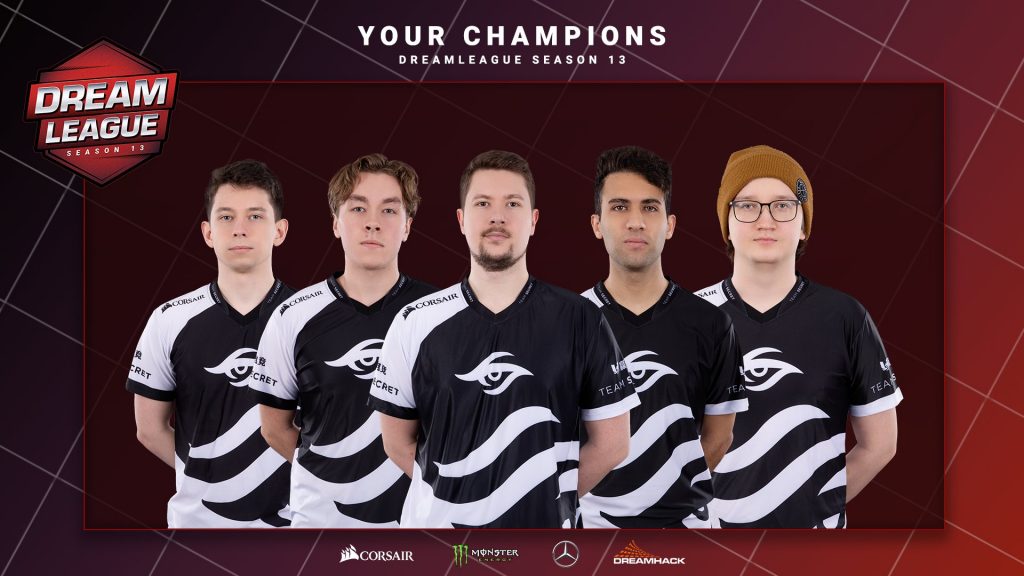 Team Secret have claimed victory at DreamLeague Season 13: The Leipzig Major, defeating Evil Geniuses in a thrilling five game series which pushed both teams to the limit.

👏👏👏👏CONGRATULATIONS ARE IN ORDER!!! 👏👏👏👏 pic.twitter.com/PiHUh9sxbn

The Leipzig Major is just the first Major of 2020, the second of the season, and it’s already set a high bar. Across eight games played on Sunday, we saw a glut of incredible play, thrilling matches, and surprising picks, culminating in a victory for Team Secret.

Clawing Their Way to the Finals

Headed into the semifinal, the dominant narrative was that Evil Geniuses has been a perennial third place contender for many tournaments. What’s more, the NA team has struggled up to this point, but with good drafts there was potential for them to defeat a dominant looking Vici Gaming stack.

The first game started out with mind games, as both teams held off showing which lanes they were going to play. While VG’s Zeng “Ori” Jiaoyang and Zhang “Eurus” Chengjun hovered mid, Artour “Arteezy” Babaev and Abed Azel L. Yusop teased their potential position. EG eventually forced their opponents to abandon the deception, as they were simply missing too much gold. This continual swapping meant a rather strange setup in the game. And with the slight lack of gold on carries, EG felt like they couldn’t fight as VG started to take objectives. Instead The NA team played it safe, built up items, and took small fights. Often they’d disengage after one or two kills. This meant they could keep up in the game, despite VG’s on-paper lead.

As a result, it was death by a thousand cuts for Vici as Arteezy and Abed became unstoppable after winning one small fight after another, until their lead was insurmountable and victory was assured.

Second game with EG breaking out the last pick Brood Mother, before starting off with a cheese kill top. This very different set of tactics backfired though, as lack of ganks and team fighting allowed VG to be more proactive, and set the tempo of the game. As a result, VG controlled the majority of the game apart from a single where EG caught them off guard. But unfortunately, EG were unable to capitalise on this, With VG taking the win in the end.

The last pick Brood looked promising for EG, but Io-Gyro is just too strong!@VICI wins game 2 of the #DHDL13 semifinals! pic.twitter.com/xejokCNOOZ

The final game began with major draft mind games, with the Io pick that had dominated the previous game clearly on both teams minds. Ultimately VG wouldn’t pick it, baiting EG into a seemingly underwhelming comp. But what followed was an amazing demonstration of highly competent team fighting, which gave EG the quick lead.

The bait, the Chronosphere, and the team wipe are all perfect! #LIVEEVILhttps://t.co/LL360SM5k7 pic.twitter.com/6QtwdwjDFJ

In a last ditch effort to bring the game under control VG engaged on Arteezy’s Void, only to get themselves wiped completely. Following this, EG headed onto the high ground and began to tear down their opponent’s base, ending the game for VG. They depart the Leipzig major with $110,000 and 2,100 DPC points.

With their Leipzig Major semifinals win, EG had broken their third place curse, and advanced to the finals for the first time in many tournaments. But ahead of them were Team Secret, who hadn’t missed a beat all tournament.

After a brief musical intermission from a talented horn player, as well as caster Admir “lizZard” Salkanović contributing to the entertainment, it was time for the Grand Finals. EG had the momentum from their earlier win, but obviously Team Secret hadn’t had a single loss since the playoffs for the Major started. The last time these teams met in a Grand Final, it had been an incredible five game series that pushed both teams to their limits.

Right from the first draft it was clear it was going to be another battle of wits and skill, just as at ESL Birmingham. EG locked in the Templar Assassin which had given them plenty of success so far, while Team Secret picked up the Io that had caused their opponent’s a lot of trouble. Starting off the game, Secret began to try and build up Lasse Aukusti “MATUMBAMAN” Urpalainen, while EG focused more on getting denies in lane.

Secret grabbed a number of significant kills across the map, but EG’s constant team fighting kept them in line with gold, and as the match ramped up, the NA team gained a significant lead. The Doom by Roman “RAMZES666” Kushnarev was the biggest part of this, creating chaos everywhere he went. What followed was an incredible performance from EG, who stomped their opponents in a very convincing fashion.

We take Game 1 as our farm becomes too much for the Dire to handle!

Coming out firing in this Grand Final was key, and we're looking to keep it rolling into the next game! #LIVEEVILhttps://t.co/rJg8vjqkl4 pic.twitter.com/z7cB7l32cv

Clearly shaken from their first match, Secret banned one of their own picks in Io, and went to one of Matumbaman’s comfort heroes. Meanwhile EG took advantage of their opponent’s bans to pick up the Tiny and Enchantress. However the major shock of the draft came as Secret picked the completely out of left-field Meepo for carry Michał “Nisha” Jankowski.

The two carry picks for Team Secret were crucial, and EG found themselves desperately clinging to life against a fed Meepo and a Monkey King causing havoc. EG could get kills but not win fights, and ultimate that meant that Secret would push into the high ground and take the win.

Trying to capitalize on their momentum heading into the third game, Secret picked Lion, a hero both Clement “Puppey” Ivanov and Yazied “YapzOr” Jaradat are very comfortable on. EG on the other hand fell back to their hard-engage, team fighting comps with a Tiny and Naga Siren pick.

Starting out this third match EG struck first, and kept the pressure on and allowing Abed to get a big lead over his opponent. This transitioned into a strong showing for EG in the early and mid game, but Team Secret refused to yield. In a back and forth match, both sides showed their raw talent as the gold lead swung between them. But ultimately the NA squad’s lineup was just more effective, and they took the win.

A back-and-forth Game 3 goes our way, putting us up 2-1 in the DreamLeague Major Grand Final!

Just one more win stands between us and the Grand Prize.

At this point, it was likely that just as in their previous finals meeting at ESL One Birmingham, that this was headed to five games. After pulling out all stops, giving Matumbaman his signature Morphling, Team Secret fulfilled this prophecy by crushing EG in game four. It was the best possible ending to a Major we could have hoped for – a five game classic with two teams trying everything possible to get an edge.

Game five saw the final blow land for Team Secret. The draft had EG pick up a Treant Protector/Drow Ranger combo with a Dark Willow comfort pick for Andreas Franck “Cr1t-” Nielsen. Meanwhile Team Secret went with the hyper scaling Phantom Lancer and a Kunkka for catch. Ultimately that was too much for EG to handle, as Matumbaman scaled into a monster, and in a very decisive fashion finished up the game and secured their victory.

Team Secret are back in a big way, and look like a lock for a high finish at The International already. After a weak start, and missing the first Major of the DPC season, there’s no doubt this is the same super strong team we always expect. With the Leipzig Major win they’ve secured $300,000 of prize money and 4,850 DPC points.

EG similarly have finally hit their stride. They’re truly the sole hope for North American Dota, and a finals appearance is sure to be the beginning of an incredible run for this team, even if they fell short here. Despite their loss in the finals, they take home a respectable $160,000 in prize money and 3,000 DPC points.

As the Leipzig Major completes, DPC Dota will return at the StarLadder ImbaTV Dota 2 Minor Season 3, scheduled for March 5th. Qualifiers for the Major and that Minor begin in the middle of February.