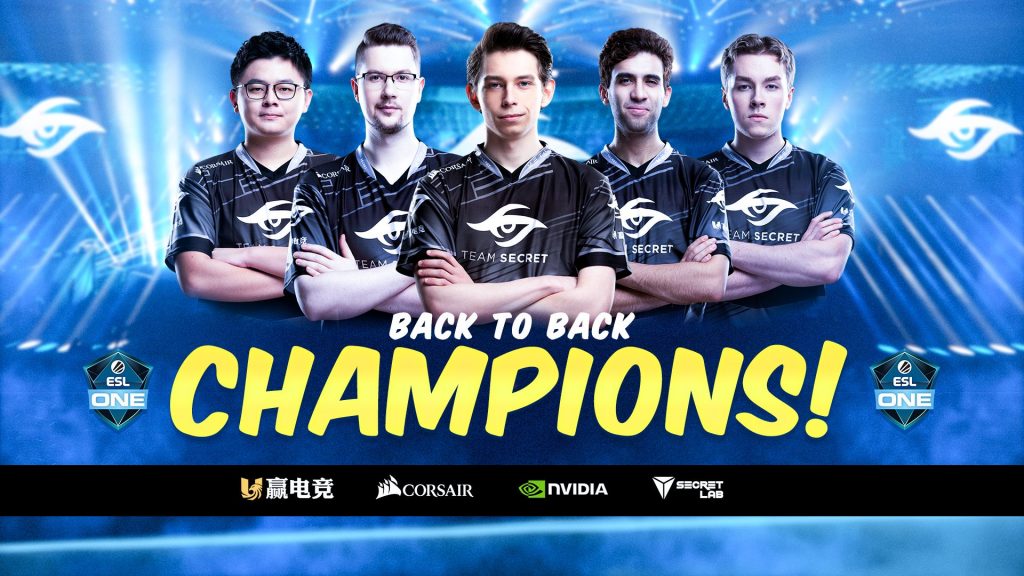 Is Team Secret unstoppable? If you watched them play at ESL One Katowice 2019, you might very well think so. (Image courtesy of Team Secret)

Is Team Secret unstoppable? If you watched them play at ESL One Katowice 2019, you might think so. The squad won sixteen games and only lost one the entire tournament. They won the event after dominating the Grand Finals versus Gambit Esports, 3-0. Team Secret take home the ESL One trophy and $125,000 USD from the $300,000 prize pool.

After losing the first game in the group stage to eventual third-place finisher OG, Secret went on a sixteen-game win streak to take home their third ESL win. They previously won ESL One Hamburg 2018, giving them back-to-back ESL wins, as well as ESL One Frankfurt 2015. Virtus.pro, who did not attend Katowice 2019, share the record for number of ESL One wins.

Support player Ludwig “Zai” Wåhlberg earned the MVP award, and a Mercedes-Benz car after hitting new personal peaks. Zai’s long been respected as a consistently strong support player, but as William “Blitz” Lee on the analyst panel notes in the clip above, he’s “kicked it to the next gear.”

This win will be extra memorable for Team Secret as it happened in front of Polish carry player Michal “Nisha” Jankowski’s home crowd. The squad actually turned down an invitation to MDL Macau 2019, happening at the same time as the Katowice tournament, so they could compete in Poland.

Second place Gambit Esports are proving themselves to be worthy opponents. Captained by CIS staple Artiom “fng” Barshack, the team won the WePlay! Valentine Madness tournament the weekend before Katowice began. They should be pleased with this second-place finish in a more competitive tournament.

OG also put in a solid showing, suggesting that the players are starting to find their footing. They’ve been slow to get their season going after winning The International 8. With carry player Anathan “ana” Pham stepping away after that big win, OG has had a hard time filling his spot. Igor “iLTW” Filatov has been with them since the start of 2019 and seems to finally be settling in.

Thank you so much for joining us for #ESLOne Katowice! Today was incredible and filled with unforgettable moments!

There was plenty of extra content in Katowice. From onstage antics hosted by Eri Neeman to player interviews with Jorien “Sheever” van der Heijden, Katowice was a treat for fans.

Also notable was Kevin “Purge” Godec reprising his role as the Dota 2 “weatherman,” providing post-game insights with replays. It’s a role for which he is uniquely suited, and it’s a delight when tournament organizers enable him to fill it.

ESL’s next event will be ESL One Mumbai 2019 in April. Ninjas in Pyjamas and Alliance have already been announced as direct invites, with five more teams to receive invitations and another five slots open for qualifier teams.