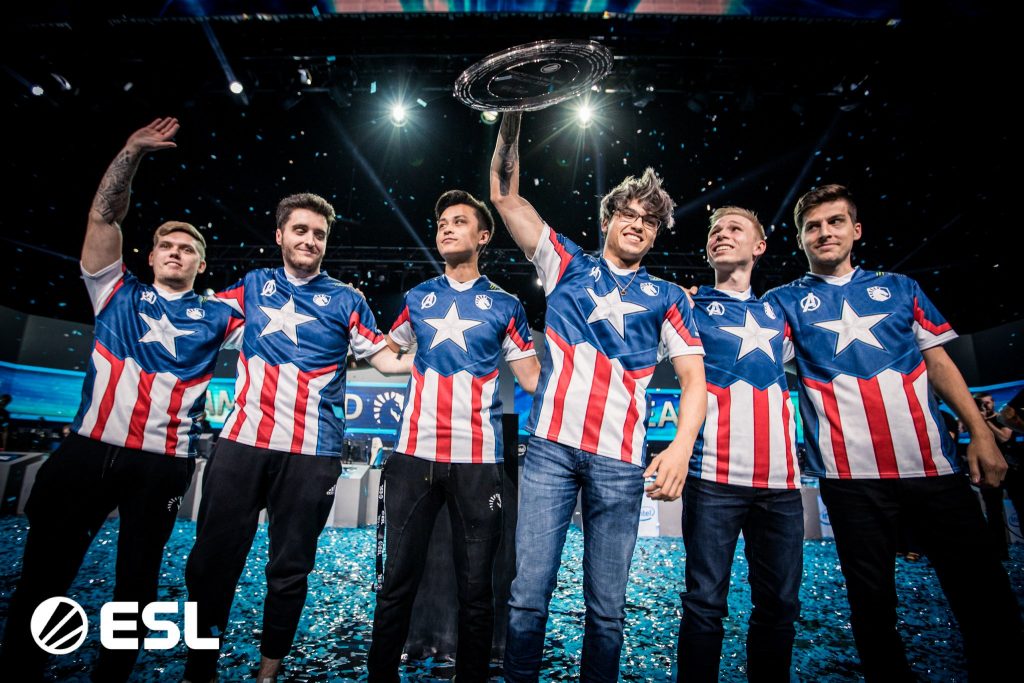 Blue and white jerseys lined the stadium floor at the United Center on Sunday when Team Liquid lifted the IEM Chicago trophy. The win comes eight months after the Intel Extreme Masters’ first Chicago stop in November, at which Liquid faltered in the grand finals against then CS:GO global leaders, Astralis. This win makes Liquid $125,000 USD richer and affords them their first point toward the Intel Grand Slam Season 3.

Team Liquid’s crusade started in Group A where they razed Team Envy, only letting them accrue seven round wins across two maps. The second series saw a much more challenging set against G2, who had proven to be difficult for Liquid in the finals of ESL Pro League Season 9. Alas, the North Americans would come out victorious and stamp their passport into the playoffs through a 2-1 series.

On the other side of the group, ENCE was making its way through the ladder; the Finns had cleanly bypassed both Renegades and Heroic – avoiding second-ranked Team Vitality and star player Mathieu “ZywOo” Herbaut in the process. In a HLTV interview, Jani “Aerial” Jussila admitted they were thankful to avoid the French fragger in the group stage:

“We have always been struggling against Vitality, we can’t beat them, we don’t know how to counter ZywOo.” Aerial said in Chicago. “It was so relieving.”

Jacky “Stewie2k” Yip referenced the article in a tweet prior to the two meeting in the finals, pointing out that ENCE should be more worried about meeting the world’s best on Sunday.

Afraid of Zywoo. We have no Zywoo because we have 5 better ones together and it just blends.

As it would turn out, the 21-year old entry fragger was right in forecasting a bleak ending for ENCE as the series ended in a clean sweep, 3-0. The first two maps – Overpass and Nuke – went convincingly in the way of Liquid. Finland’s best was only able to string together five rounds between the two maps, making it even more apparent just how dominant Liquid are compared to their international competition. The third map, Inferno, gave fans in the arena something to get excited about as the series came down to a clutch 16-14 scoreline. Aleksi “allu” Jalli and company had pulled out a collection of stops late in the game to even out the score, but Liquid would close matters out as to not let the series extend any longer.

Last year in Chicago, Team Liquid faltered in the grand finals to Astralis, making the win here that much sweeter – especially when their Danish rivals are nowhere to be found in the scope of true opposition. Furthermore, defeating ENCE in such clear cut fashion ingrains the progress Liquid has made in the last three months alone; whereas back in February at the Katowice Major, the Finns were those dealing playoff losses.

The champions sat down for a press conference after securing the title in Chicago – first speaking to earning their first Intel Grand Slam Season 3 stripe and the possibility of achieving the award twice in one year.

“We stay in reality as much as possible and we don’t add that pressure when we play the game. We know it’s there but we try to play every game like it’s the same.” Stewie said. “We leave everything on the table and that’s the most important thing.”

In-game leader and longstanding member of Liquid, Nicholas “nitr0” Cannella opened up around the status of the team and what makes them so strong.

“We have five players here who know how to play the game and I think it comes down to having strong fundamentals,” Nitr0 said. “Everyone is playing insane right now.”

Following the title finish here in the Windy City, the team – along with many others – will take a much-needed player break prior to shipping off to Berlin for the StarLadder Major next month. Having achieved Legends Status previously in Katowice, Liquid will have a slight advantage by being birthed into the second stage of Major. Though, with everything the team has accomplished as of late – from earning the number one global rank, a title win at the “Cathedral of Counter-Strike,” to the Intel Grand Slam – it’s recognized that all that’s left is a win next month in Germany, as Russel “Twistzz” Van Dulken puts it:

“The major is the only thing missing right now.”