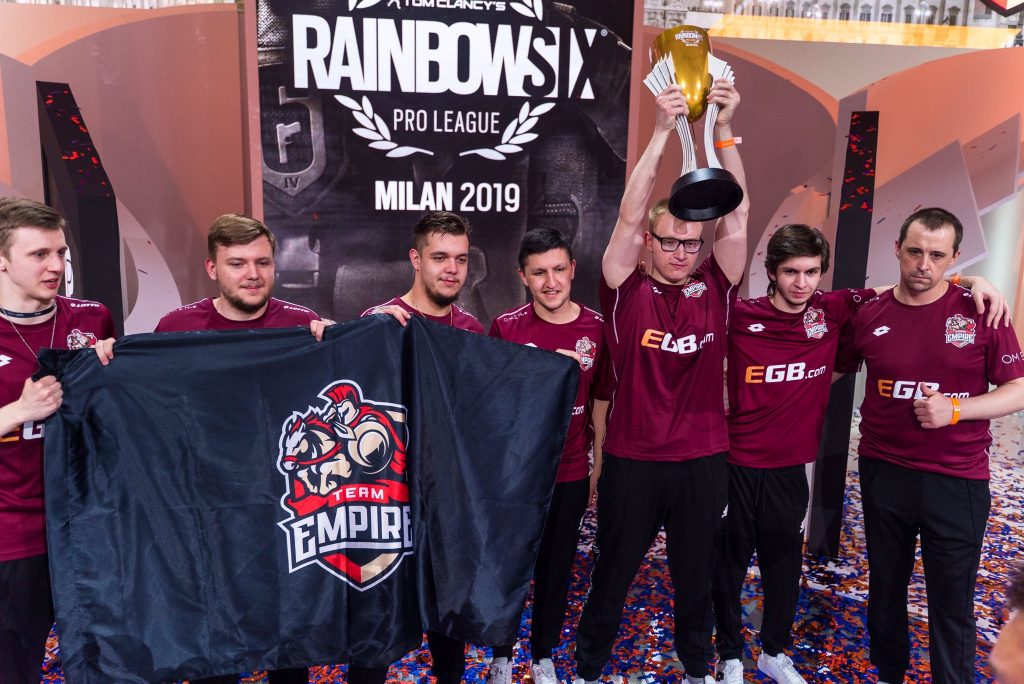 The Rainbow Six Siege Season 9 finals concluded this past weekend in Milan, Italy. Eight teams from around the globe fought to become the seasonal champions. With the (usually) all-conquering G2 Esports failing to qualify for Milan, the door was wide open for the attending teams. Would it be G2’s international rival Evil Geniuses who would come out on top, was it finally Team Empire’s turn for the championship or would Brazil rise once again? As it turned out, Team Empire became the Season 9 Champions after a well-fought run from start to finish.

The APAC quarterfinal between Nora-Rengo and Fnatic ended in a 2-0 for Fnatic. However, Nora-Rengo made sure their rivalry was impactful. The first map on Border went to overtime as Fnatic won the map 8-7, after which Clubhouse also went to overtime 8-6 in favor of Fnatic. Fnatic advanced to await the winner of DarkZero and Team Empire.

The second quarterfinal, between LeStream Esports and FaZe Clan, had a strange turn to it. LeStream were the favorites of that series due to how good they were in European competition. FaZe Clan were not to be underestimated as the kings of Latin America. Stylistically, LeStream and FaZe Clan are similar. The heavy fragging style definitely clashed this series, but it was in the Brazilians’ favor.  Bank went in favor of FaZe Clan in another overtime, whilst FaZe dismantled LeStream on Oregon.

Team Empire versus DarkZero went similarly to FaZe and LeStream. The fragging and star power in this series were phenomenal, and both teams had solid runs in their regionals. Bank is a map were fragging style plays a huge role in controlling the objective since defensive positions are tightly contested. DarkZero’s combination of mature, recognized talent and fresher talent at the international stage proved effective. Team Empire managed to gain control back, but it was at a cost of DarkZero shaking them to their foundations. This map was also another overtime wonder as Empire won it 8-7. The dream run for DarkZero was cut short before it really began. Team Empire took the second map 7-3 and advanced to face Fnatic.

The final quarterfinal between Evil Geniuses and Immortals went as expected. Immortals have always struggled to find themselves internationally, though they made the second map a worthy contest. Evil Geniuses dominated Oregon 7-2 making it the most dominant performance of the day. Immortals did their homework on EG as the second map was Coastline. Evil Geniuses has a history of weird results against their NA counterparts. They either hard stomp or only take the map by an inch. Immortals put them to the test and EG paid off, but EG only won the map 8-7 in overtime.

For the first time at Milan, Fnatic and Team Empire went to a third map. Heading into the series, Team Empire won Consulate 7-4, making us believe this would be another 2-0. But, Fnatic fought back just as hard. The second map went in favor of Fnatic 7-3 on Border.

No more 2:0 victories! @FNATIC was in full control on Border. #R6PL pic.twitter.com/krnTKjihTI

Sadly, the storyline had to end for Fnatic somewhere, and it was a brutal way to go. Team Empire’s Clubhouse was so strong that Fnatic was defeated 7-0. Team Empire advanced to the finals where they would await Evil Geniuses or FaZe Clan.

The semi-final between FaZe Clan and Evil Geniuses was a great series. This series ended 2-0 for EG but FaZe made sure they showed the world they are a solid opponent. EG was successful on Clubhouse 7-5.  On Border, FaZe made sure their efforts were put to good work. EG and FaZe sat on 5-5, and then it went to overtime as they took back-to-back rounds off each other. In the end, EG took two back-to-back rounds to advance to the final.

As the final played out, the world thought they watched the return of the Evil Geniuses era. Bank was a strong map for both teams. Evil Geniuses did their research heading into this map and Team Empire’s aggressive style was shut down, helping them lead to a victory. On Oregon, this continued right until Evil Geniuses felt the pressure. It was reminiscent of when EG choked out the lead they had against Penta Sports (now G2) at the Six Invitational 2018.

As seen in the clip above, this was the precise moment that Team Empire knew they wouldn’t slump and, instead, could keep their dreams alive. Team Empire wouldn’t be denied another trophy at the final hurdle. Empire pushed themselves from elimination into overtime, and then to map three in one heroic comeback.

As for the final map, Clubhouse was a strong map for EG and Team Empire. Both teams had played the map on Championship Sunday, as Empire won 7-0 and EG won 7-5.  Disappointingly, Evil Geniuses had lost their voice on the server, as Team Empire ran away with plenty of rounds. Even in the final moments of the map, Team Empire won against the odds as a 1v2 turned into a trophy lift.

About three months overdue, Team Empire got to lift a trophy that had proven elusive for them. Once again, Team Empire brought another trophy back to the EU region. Team Empire’s story is an amazing one. In their first season, Empire rose from Challenger League Season 8 to second-place at Six Invitationals 2019, to lifting Season 9’s trophy. This is definitely one of the best Rainbow Six Siege stories to date.