Tay: “Our Team is Still Playing a Little Bit Afraid” 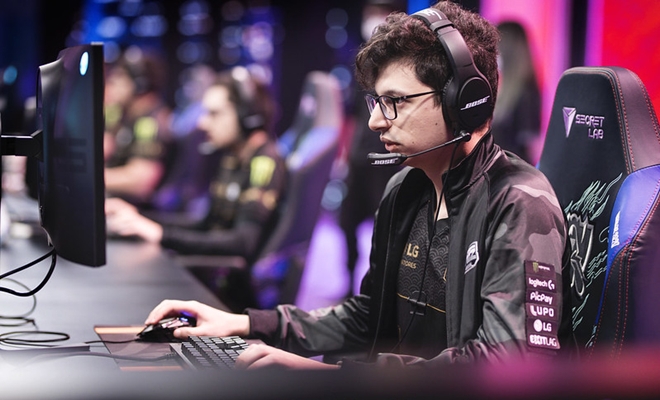 Tay ended the first day of the Play-in Stage with a 15/6/8 scoreline across two games. (Photo courtesy Riot Games)

Brazil’s INTZ opened the 2020 League of Legends World Championship Friday against Europe’s fourth seed MAD Lions. After falling 0-2 on the day in two close matches against MAD and the Oceanic Pro League representatives Legacy Esports, INTZ will have to win both of their next two games in order to have control of their fate.

We checked in with top laner Rodrigo “Tay” Panisa, who was one of the team’s top performers on the day, to talk about the road ahead and his personal goals for Worlds this year.

Hotspawn: You’ve finally arrived at Worlds! How was the quarantine period for you? What was it like playing on the superserver against so many strong players?

Tay: The quarantine was pretty hard, of course, because I couldn’t see anybody, but it didn’t really change [much]. I spend a lot of my free time playing at home as well or playing with my team, so for me it wasn’t that hard. So the solo queue is really hard here and it was really nice to have an opportunity to play against the top players. Not only because the players here are way better than the ones back in my region, which is not the best solo queue in the world, but also we have the best players in the world playing here. Solo queue helped me a lot mechanically and pushed me to my limits during quarantine.

Hotspawn: Obviously the tournament didn’t start out the way you would’ve wanted it to, but you had very good individual performances. How did it feel playing on the international stage for the first time this year?

Tay: So for sure it wasn’t how we expected it to be. The first two matches we made a lot of group errors and we weren’t proactive enough and also here in Worlds or MSI, or any big event, if you don’t do something somebody’s gonna do it for you so I feel like that was our big mistake. I feel like I had one or two good performances, but still it wasn’t enough for us. The reason behind that I believe is that I could play a lot more loose, a lot more like that way that I would in Brazil, so I think that impacted my game.

Hotspawn: It’s interesting that you say that because of course you started the match against MAD Lions with that unfortunate teleport mistake, but you instantly bounced back from that. Do you think you’ll be able to carry that resilience into your next games?

Tay: What we have to do is win. We can’t depend on other teams’ results or rely on any tie-breakers or anything. We really have to play like we’re supposed to: really loose and unafraid of plays. I feel that our team is still playing a little bit afraid and that just cannot happen tomorrow. So that’s our mindset: we have to come back tomorrow and not give a chance for any other team to do their thing.

Hotspawn: Shifting gears, what are your thoughts on the top lane meta at Worlds so far? You were able to bring out some counterpicks in Urgot and Vladmir, but what champions do you think are going to be prioritized in top lane based on what you saw in scrims and solo queue?

Hotspawn: So Brazil is a region that’s historically been considered underdogs at Worlds and you’re still looking to find those standout showings. Of course you’re looking to make it into the Main Group Stage as a team, but what personal goals do you have for yourself as a player this Worlds?

Tay: I think that the most that I’m learning from losing is that I can show everybody the way that I play. There are so many regions, so many playstyles, and everybody has their own style. The most important thing for me is not to mimic those styles. I have mine and I have to trust in my game and I’m learning to trust my game and that works. Even though there are really good players trying to mimic those, the best players, can only hold you back. So I’m really learning to trust my game even more with this opportunity to play against the best in the world.

INTZ return to the Play-in Stage on September 26 where they’ll face Papara SuperMassive at 2 p.m. PDT.