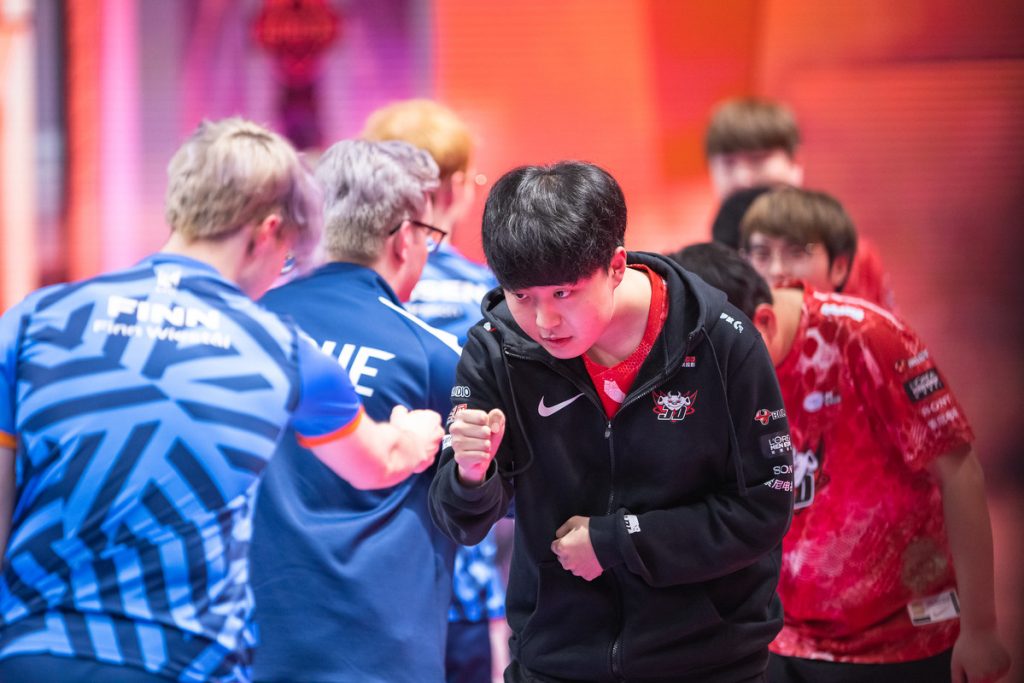 The LPL teams stood strong yet again, but the LCK is climbing back. (Photo courtesy Riot Games)

Eight days of League of Legends World Championship Group Stage action are behind us, and four days of quarterfinals are approaching. We’re far past the halfway mark in terms of games that will be played at Worlds, but the matches ahead are all the more important. But what have we learned so far at Worlds? Which lessons can we already write down in the notebook? We’ve got a few takes cooked and ready for you ranging from ‘having a bit of a bite’ to so spicy that even Hot Ones thinks they’re too extreme.

NA’s bad, but not horrible

Ah yes, North America, the region so full of freedom they give away free wins to those who are drafted against them. Of the four major regions in League of Legends esports (China’s LPL, South Korea’s LCK, Europe’s LEC, and NA’s LCS), the LCS has for years been regarded as the weakest one. And yet, again they lived up to that status with not a single of the region’s representatives advancing to the top eight. There is not one single issue that the North American LoL esports scene has to address, it is a combination of multiple issues. The lack of a vibrant scene for up-and-coming players, ping issues, teams’ approach to the competition… There is a lot.

However, while the LCS teams undoubtedly disappointed, things mustn’t be exaggerated. It’s not a downright atrocious region. Yes, TSM, the first seed of the LCS, did go 0-6 in their group and it was quite a shameful showing. But one team’s fall should not take away anything from what the other two have managed to do. Team Liquid defeated every single team in their group. FlyQuest toppled Top Esports. It might have been too little too late for them to salvage their earlier results, but the potential was clearly visible. North America just has to tune its scene to be able to step up consistently, and that’s a lot of work. So yes, North America failed and they’re the appendix of the four major regions. But they’re still a clear step above the minor regions. 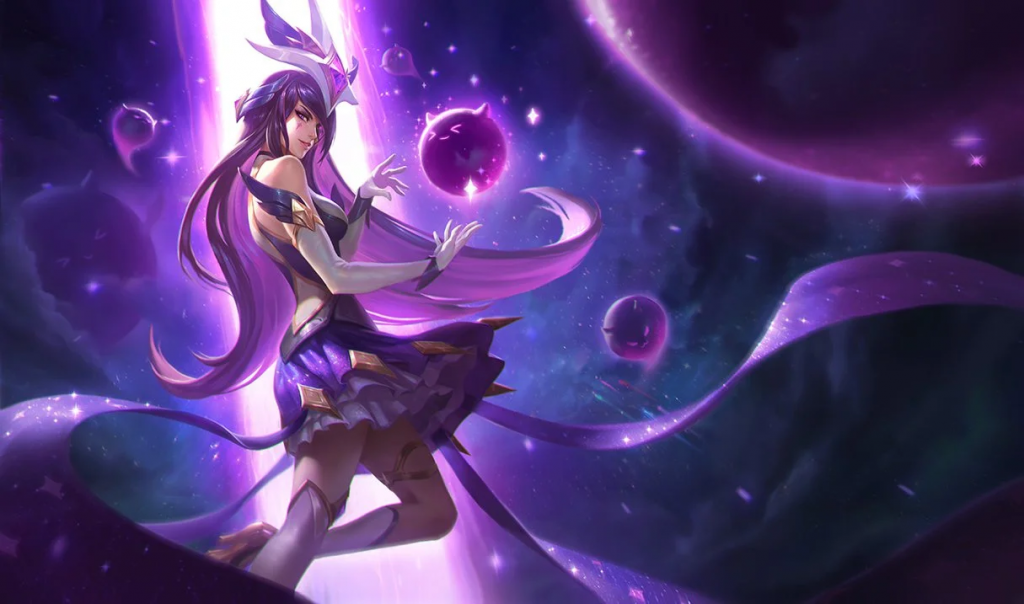 There are a lot of good things about Syndra as a champion. She’s a safe pick in the mid lane, she can play aggressively and defensively, she has a lot of burst damage, she can be flexed to the bot lane, she has the potential to stun a lot of enemies… It’s a long list. For these reasons she has been around in the meta for a long time. Sometimes more prominently than other times, but you could always say “well, I guess I’ll pick Syndra.” This Worlds, however, it’s becoming glaringly obvious that the year-long option for players is making a negative impact on teams’ performances at Worlds.

Syndra is the worst-performing champion when it comes to how often she’s contested in the pick/ban phase and how often she wins games. During the Group Stage alone, Syndra was a contested champion in 85.7% of the games. In total, she was played in 23 of the 49 games. Yet she holds the low win rate of 39%. It’s understandable to default to her when she has been around for years, but there have to be better options. Syndra is vanilla, she’s a glass of water with your meal where a good glass of wine would make the entire meal just so much better. The League of Legends developers have toned her power down leading up to Worlds, and it’s time to move on from her.

One of the most exciting things about competitive League of Legends is how minute changes to a champion can ripple through the entire meta and change it. It’s an ever-changing landscape that continues to be rediscovered by practicing and testing. This year at Worlds, the meta in the jungle is fairly straightforward. You have three main farming junglers in Graves (played in 36 of 49 games), Lillia (19 times), and Nidalee (15 times) with a handful of lesser-popular picks following. Their idea is simple: farm jungle camps, get strong, and carry your team.

Jungling is a peculiar role in League of Legends and there is a lot more nuance to it than the role is often being credited for. But mighty me is the Worlds 2020 jungle meta boring. After you maybe get some level one action with an invade, the junglers do their own thing for what feels like a century before popping up and doing something. There is little to no room for innovation, it seems. Lee Sin, for example, which is one of the most exciting champion to see players excel on, is simply a bad pick in the meta. The ganks in the current meta can be seen coming from miles away and while a good blast with Graves’ Ult to obliterate a player will always feel good, the jungle is far from exciting at the moment. 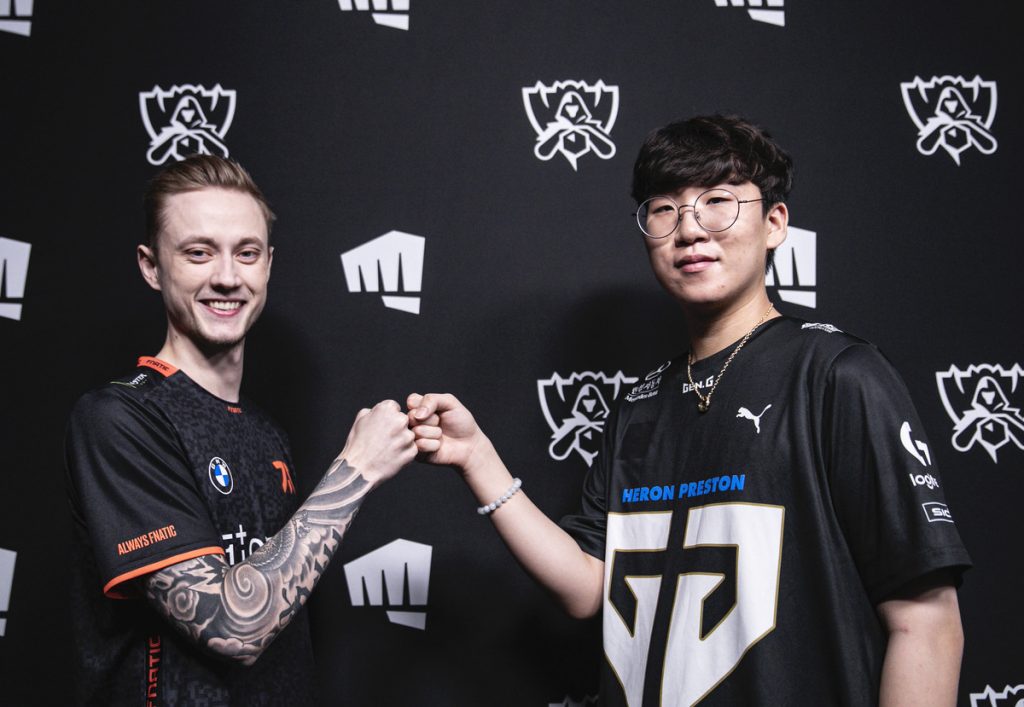 Rekkles and Ruler both advanced to the top eight, but have their work cut out for them. Photo courtesy Riot Games.

The era of South Korean dominance in League of Legends came to a halt in 2018 when Invictus Gaming was crowned World Champion and Fnatic grabbed the silver medal. Ever since, the LPL has been regarded as the strongest region in LoL esports. Europe wasn’t immediately seen as the second-best region universally. But then G2 claimed the Mid-Season Invitational 2019 title. All three representatives at Worlds 2019 advanced to the Knockout Stage. And finally, Europe once again made it to the Worlds grand finals. It was undeniable that Europe had surpassed South Korea.

However, it seems like Europe didn’t manage to hold on for long. Based on the performances from the teams at Worlds so far, it seems like Korea has surpassed Europe once again. MAD Lions and Rogue both crumbled and Gen.G, third seed of the LCK, has looked better than Fnatic, LEC’s second seed, in the same group and in their head-to-head confrontation. G2 Esports is not looking as strong as they did in 2019 either. Meanwhile, DAMWON Gaming seems to be speedrunning towards the final with an incredibly dominant performance, and DRX is no slouch either. Perhaps in 2021, when the LEC might return to playing on-stage if the state of the pandemic allows it, Europe can start working its way up again. But for now they’re looking up at the LCK.

The Group Stage format needs to be revised

The format of the League of Legends World Championship has received criticism since its inception and while the format has changed over the years, it’s still far from perfect. This year it seems like Riot Games accidentally stumbled on a more exciting Play-In Stage when they were forced to adjust it due to the VCS not being able to attend Worlds. But the Group Stage, which is played in a double Round Robin, best-of-one format, could not have shown better that it needs to be tweaked too.

Group A and C, granted brought some excitement when in the second half of the Round Robin there were still matches that mattered greatly. By the grace of teams’ inconsistency, these groups’ entire conclusion days were exciting. But Group B and D told a completely different story. Both groups were decided by the time their second game had finished already. Only the sixth and final match of these groups’ conclusion days could have mattered for the seeding going into the Knockout Stage. Match number three, four, and five were ‘fun’ and gave eliminated teams a chance at reclaiming some glory, but where is the point in that? Why would there be for-fun matches at the highest possible stage your esport offers? It made the days dull and a bit of a drag. There are plenty of alternatives for Riot Games to consider, from GSL-style groups to a double elimination Knockout Stage with more teams advancing from the Group Stage. Please Riot, give it a shot.