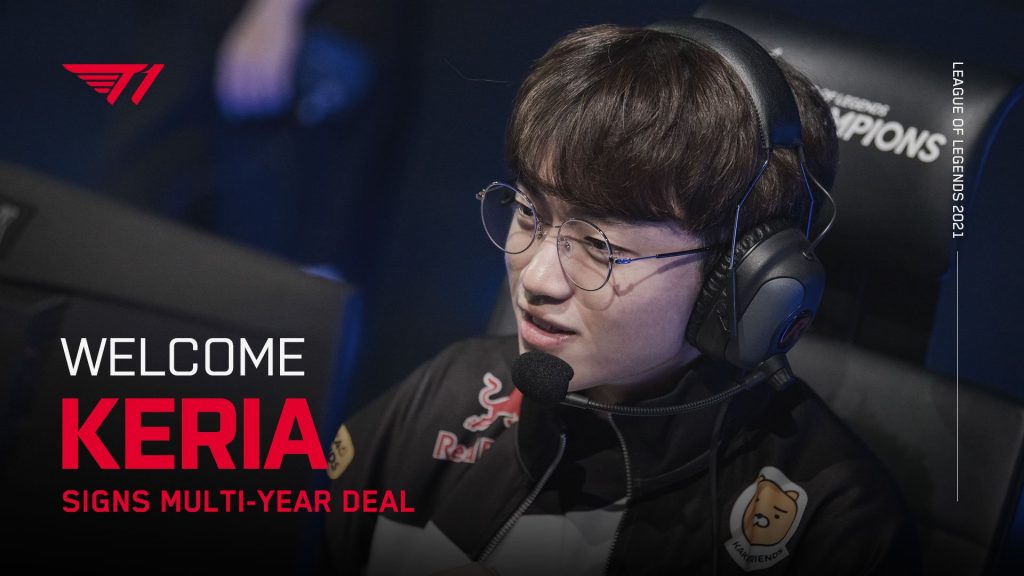 T1 have signed Keria, one of the most promising free agents in the Support role, to a two-year deal. (Photo courtesy T1)

The LCK’s offseason roster shuffle is now in full swing. Many players have been announced as free agents so far, including a trio of top tier talent from DRX. T1 has made the first big acquisition, signing former DRX Support Ryu “Keria” Min-seok to a multi-year deal.

We're thrilled to announce that Ryu "Keria" Min-seok will be joining T1 for 2021. Please welcome Keria to the T1 Family!#T1WIN #T1Fighting pic.twitter.com/nubuqHXqRu

Keria made his LCK debut in the Spring 2020 split when he was brought up from DRX’s academy roster alongside Hong “Pyosik” Chang-hyeon. The Support/Jungle duo immediately made an impact, taking a team that missed the playoffs in the previous to split to a tie for the best record in the league. They even ended the regular season with a seven game win streak.

Keria contributed heavily to DRX’s success during that time. He was able to climb the MVP standings, ending in third place with 1000 points, just 100 behind teammate Jeong “Chovy” Ji-hoon. Keria was also awarded the Best Young Player title and a place on the First All Pro Team.

DRX and Keria kept improving in the Summer, this time finishing in second place instead of third. Although they were denied a championship by DAMWON Gaming, DRX had still earned a spot at Worlds 2020. Once there, DRX escaped from their group in second place behind TOP Esports before falling to DAMWON once again in the quarterfinals 3-0. Keria held the fifth best KDA among Supports despite DRX having an overall negative win rate.

With this signing, T1 have bolstered their roster for the 2021 season. Keria is one of the most promising players in all of the LCK. He brings the rare combination of being a young player with room to grow, as well as having big game experience with and against veterans. For a T1 squad that missed the 2020 World Championship, this pickup could be what they need to return to the top of the league. More signings are also expected by them as the offseason continues.