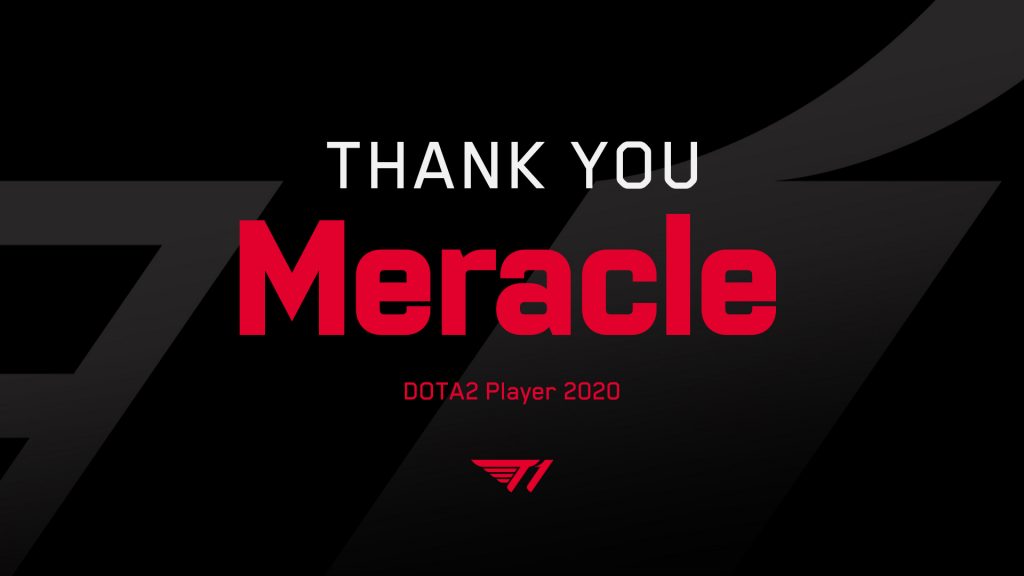 T1 will say goodbye to its primary carry and coach following a disappointing year of Dota 2. (Photo courtesy T1)

T1, one of Korea’s most famous esports organizations, has announced the departure of Galvin “Meracle” Kang Jian Wen, and Coach Nicholas “xFreedom” Kelvin Ileto from it’s Dota 2 roster. The news was released on T1’s official Twitter on September 16th.

Today we part ways with Meracle and Xfreedom. We thank both for their contribution to the team and with all the best in the future. pic.twitter.com/WA4j8Uej6l

The move comes just over a year after the initial founding of the T1 Dota 2 team. Since then the squad has faced plenty of turmoil, seeing it’s original marquee player Lee “Forev” Sang-don depart in July. As events transitioned into a newly-online format, the team struggled to compete, only finding success in tier three events.

Galvin “Meracle” Kang Jian Wen has been a veteran of the SEA Dota 2 scene for almost eight years, and has played for numerous top organizations, including Mineski, Fnatic, and a brief trial with Complexity Gaming. Nicholas “xFreedom” Kelvin Ileto is a former player, who’s most notable achievement was a run with Team Zenith at TI2 that saw his squad reach 5th-6th place.

The news sees T1 fall to a roster of just four, with no one position to fill Meracle’s role. The departures also coincide with a series of disbandments and roster trimmings across the SEA region. Earlier in the day Fnatic announced it would be parting ways with another member of it’s roster. Earlier in the month both Reality Rift and Geek Fam announced their disbandment, citing uncertainty in official competition.

In their announcement, T1 thanked Meracles and xFreedom for their contributions and wished them the best in the future. The full announcement of the roster move can be found on T1’s official Twitter page.