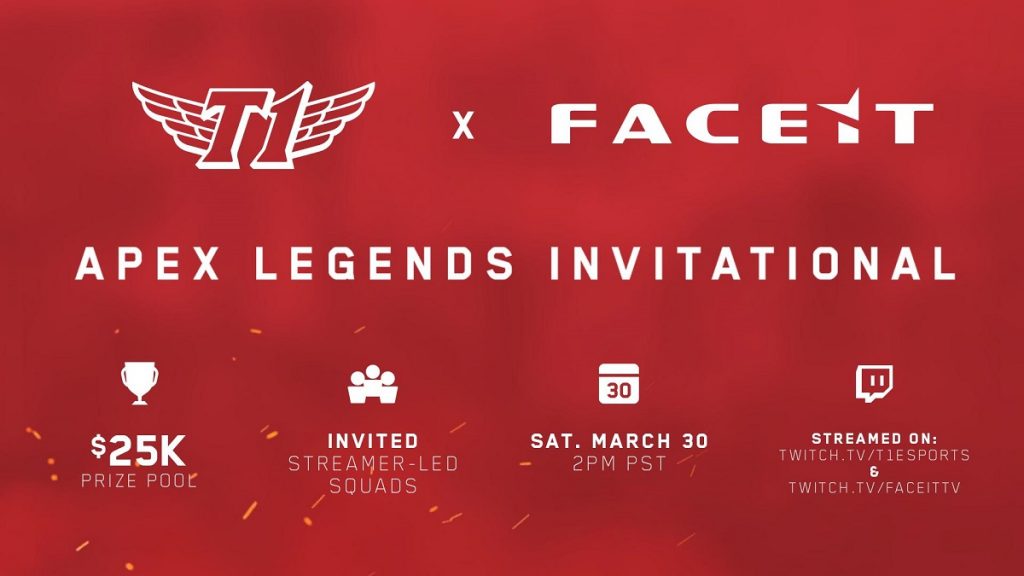 The Apex Legends Invitational is the first big event for T1 Entertainment & Sports, the joint esports venture under SK Telecom and Comcast Spectacor. The joint venture was revealed in February when the organization announced its plans to create teams across a multitude of esports.

This is also new territory for FACEIT. They have been slowing breaking into battle royale esports, first with the FACEIT Global Summit: PUBG Classic and now this tournament.

In a press release regarding the tournament, Michele Attisani, Co-Founder & CBO of FACEIT, said, “Apex Legends is one of the most popular games in the world right now. The battle royale genre has truly set the gaming world alight and we’re thrilled to keep playing a part in the development of the competitive community.”

The tournament will see a number of top-performing teams invited by T1, which will include popular streamers and professional players. Expected participants include Haydin “Zerg” Gordon, Kurtis “Kurt” Gallo, and Brendan “BCJ” Jensen who T1 recently signed to their Apex Legends team.

T1 also confirmed they are running a two-week qualifying league event in the Apex Pro Discord. The top three teams will be able to participate in the main event. The qualifying event is set to run from March 18 to 29 from 8 p.m. EDT to 12 a.m. EDT.

The Invitational finals will then take place on March 30 from 5 p.m. EDT and is expected to last four hours. The twenty confirmed squads will go head-to-head in an elimination race and be ranked on a scoring system currently to be confirmed. The matches will be streamed on the T1 and FACEIT Twitch channels, with one team broadcasting live from the FACEIT Studios in Santa Monica.