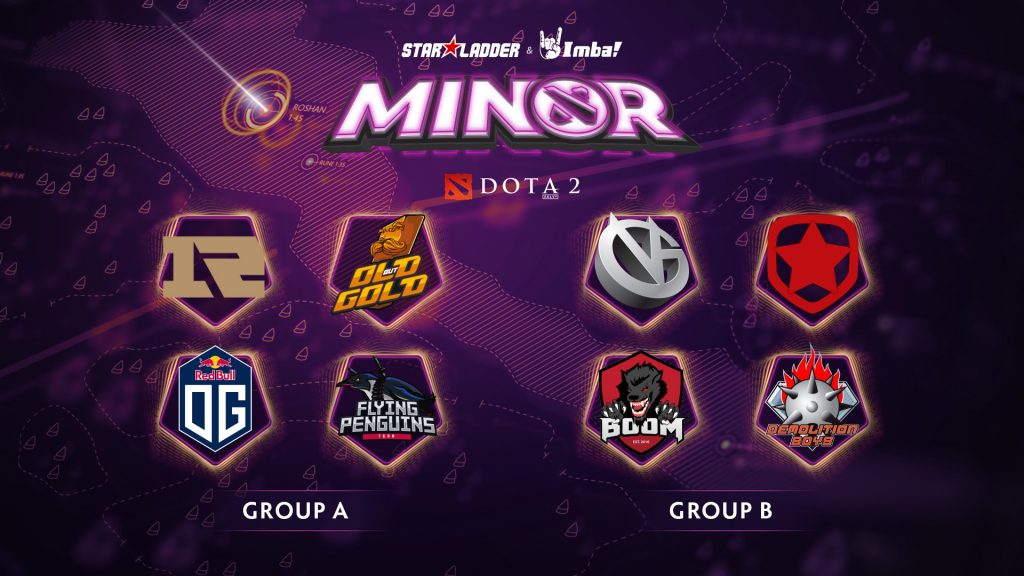 The StarLadder ImbaTV Dota 2 Minor kicks off this week from March 7-10 in Kiev, Ukraine. This will be the third Minor on the Dota 2 Pro Circuit (DPC) with 500 points and $300,000 USD at stake. Most importantly, the first-place team will earn a ticket to the DreamLeague Season 11 Major later in the month, which will have more DPC points and prize money.

Eight teams qualified for the event in Regional Qualifiers in early February. Among them are some pretty notable squads as well some recently formed stacks. Three of the teams experienced difficulties at the Ukraine-Russian border, though all are reportedly now present in Kiev.

The teams have been split into two groups for the group stage: A and B. Each group will have a GSL format, with the top two teams moving into a single elimination playoff bracket, and the bottom two teams eliminated.

First up in Group A is Royal Never Give up, one of two teams representing China. Since qualifying, the squad has swapped out their position five player for Zhang “LaNm” Zhicheng. The team didn’t achieve notable results at the following tournament, MDL Macau 2019, but they’ve had more time to gel since then.

The North American representatives, Flying Penguins, are headed by Jacky “EternaLEnVy” Mao. They came together for this round of DPC event qualifiers, though EnVy and Jingjun “Sneyking” Wu have been playing together since September 2018, on three different teams. Rodrigo Lelis “Liposa” Santos and Francis “FrancisLee” Lee have played together since June 2018.

Old but Gold is a Russian stack who qualified to represent the CIS region. Stacked with familiar faces, the squad put in an impressive performance during the StarLadder qualifiers, but struggled in the WePlay! Valentine Madness tournament. After spending a couple days just trying to get to Kiev, Old but Gold will have had less time to settle in than other teams at this point.

Our #SLIMinor journey starts tomorrow.
We'll be facing our first opponent in Group A: Old but Gold at 14:30 CET. #DreamOG pic.twitter.com/iXlHBtkzm2

Fortunately for the CIS squad, the last team in the group has also had some travel issues. One of European team OG’s players, Igor “iLTW” Filatov, was caught in the border-crossing mess, though he’s also now in Kiev. OG is one of those teams who are easy to root for due to their charismatic players, despite their rocky performances of late. They placed third at ESL One Katowice, losing to Gambit Esports (who are in Group B), but were 5-8th at the WePlay! Dota 2 Tug of War: Radiant tournament, which was arguably less competitive overall. They could win this tournament just as easily as they could be knocked out during the group stage.

The second CIS team is in Group B: Gambit Esports. They were the other team to face travel complications that were only resolved the day before the competition is scheduled to begin. Gambit has done well in off-DPC events, placing second at ESL One Katowice 2019 behind Team Secret and winning the WePlay! Dota 2 Valentine Madness event. They were second at The Bucharest Minor, losing 1:3 to EHOME in the Grand Finals. The team is, however, playing with a stand-in for mid player, Andrey “Afoninje” Afonin. He will be competing for Team Russia at WESG, and so Rostislav “fn” Lozovoi will play in his place.

Another team to watch is the second team from China: Vici Gaming. Vici Gaming is the only team at this tournament within the top twelve teams in the DPC rankings. If the team can maintain that position, the players will earn a direct invitation to the most important tournament of the year: The International 2019. They recently placed 5-6th at MDL Macau 2019, and 7-8th at The Chonqing Major. With the formidable Bai “rOtk” Fan coaching the team this season, expect Vici Gaming to be a formidable force in Kiev.

Indonesian team BOOM ID will represent Southeast Asia at StarLadder. This will be their second DPC event and an opportunity for them to improve on their previous last-place finish. They don’t have a lot of international experience, but that could mean they slide in under the radar of other teams. Rounding out Group B is Demolition Boys, formerly known as Team Odd, and before that, as Playmakers Esports. Like BOOM ID, the Peruvian squad were at the Bucharest Minor and came in last (a shared 7-8th). They would certainly like to put in a stronger showing in Kiev.

Every series of StarLadder will be a best-of-three other than the grand finals, which will be a best-of-five. Group A will kick things off on March 7, with Group B starting up on March 8. The groups will finish on March 9, and the entire single elimination bracket will play out on March 10.