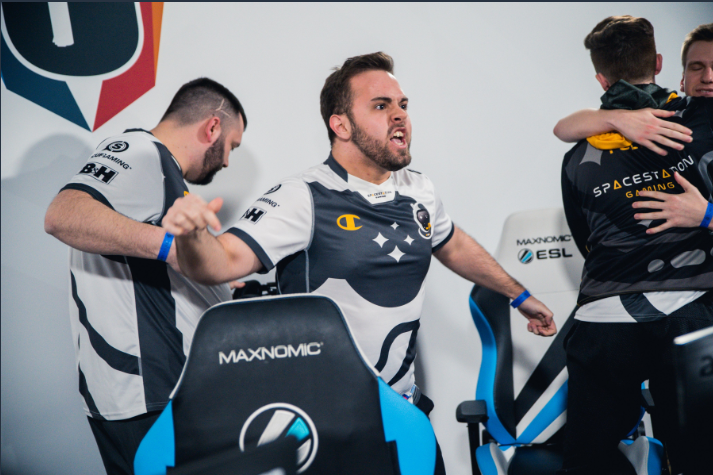 Spacestation Gaming defy expectation and come out on top of their group at the Six Invitational. (Photo courtesy Ubisoft)

The Rainbow Six Invitational 2020 is already off to a strong start. Day two concluded on Saturday and we know the four teams who advanced from the group stages with a 2-0 scoreline. The most surprising result is that North America has shown up more than people expected, and that is great news for international competition. As for LATAM, we knew it would be a bloodbath considering one group was filled with LATAM teams. Meanwhile, in Group D, G2 Esports show the world they are making the most from their direct invite.

Group A – DarkZero topple the empire

Group A had the final we predicted, though not the result we called. In our predictions, we had Team Empire taking first and DarkZero taking second place. However, DarkZero edged out Team Empire in one of the best international best-of-threes we have ever seen. The series was back and forth, full of great plays and close calls. Team Empire got Coastline, a map they are famous for, whilst DarkZero did their homework and brought Team Empire to Consulate, a map Team Empire are not so great on. Both teams took their respective map picks and the decider was on Bank.

The first half was a 3-3 result, showing just how close the series remained. On the flip side, DarkZero gained more control and got themselves to a 6-5 point. The series was decided in the last 15 seconds of the round when DZ stormed Empire in a 5v5 skirmish. They planted the defuser and managed to take the game. That’s how you upset predictions in style.

On a side note, DarkZero also pulled out a unique strategy they used against FaZe the day before. This move completely devastated FaZe Clan, and Team Empire should have been aware of it. Instead, Team Empire did not react to it, meaning they didn’t do their homework. This one decision may have been the series definer. Team Empire must respect their opponents in their preparation time. Otherwise, they will miss out on lifting the Six Invitational trophy again.

Group B – We have lift off

Speaking of expectation defiers, Spacestation Gaming defied all the odds and came out on top of Group B. They battled regional rivals TSM in the upper bracket group final. Most people had TSM to take first place because of their great online and offline prowess. They even sent Rogue to the lower bracket off 7-2 map wins on day one. However, SSG did their homework (unlike Team Empire) and knew how to control TSM on Bank and Kafe.

The best bit about the Kafe pick was that SSG was more than willing to let TSM onto the bomb site and plant the defuser. TSM would get early bomb plants, but they soon found themselves in man disadvantages. It was a strange yet effective tactic that really did upset TSM’s attacking strategy.

Spacestation Gaming repeats their surprise 2-0 exit from the Six Major Raleigh at the Six Invitational. Maybe they are the king’s of group stages at this point? It certainly seems that way.

Ninjas in Pyjamas are your LATAM team to exit Group C in style. In the opening round they took down Team Liquid 2-1, with the first two maps going 7-5. Proceeding into Consulate, NiP battered Team Liquid 7-2.

On the other hand, their upper bracket match vs MiBR was much easier in comparison. NiP won Clubhouse 7-3 and was generally a good showing for them. Things got a little closer on Consulate when NiP had to win the map in overtime. Perhaps MiBR had an idea of what to expect from NiP’s showing on day one. Although, NiP took the series 2-0 in the end.

For context, NiP was so close to getting out of the groups in the Six Major Raleigh. But they went 0-2 after losing every map in overtime or 5-7. This is NiP’s redemption story. They are a team to watch moving into the playoffs for narrative purposes.

G2 Esports shows the world they are making the most out of their direct invite. The last six months of their careers have been harsh. They have fallen at LAN events in the first round and their online season has been troublesome. The direct invite was Ubisoft’s opportunity to give G2 the shot they need to defend their Six Invitational 2019 title. So far, they have used the opportunity well.

G2 Esports’ first match against Team Reciprocity was a slow starter. They won Consulate 7-4, lost Clubhouse 0-7 and won Border 7-5. Clearly, G2, have things to work on as the tournament progresses. However, that was their warm-up match.

They faced BDS Esports in the upper bracket group final. Here G2’s veto phase was great. They managed to somehow get BDS not to ban Villa against them. Villa has been a LAN favorite of G2 Esports since the OGA PIT, and their attacking rounds on Villa was strong. BDS did upset them on a few rounds, but a 7-5 victory on Villa is a good one nonetheless.

Moving onto Kafe, G2 Esports had very interesting tactics ready for BDS. Their attacking round had them pick Fuze and Glaz, two Russian operators notorious in the lower ELO of Ranked Rainbow Six. The idea was the flush lurkers through vertical gameplay and to maybe clear Jaeger ADS trophy systems. Although that strategy didn’t work out, their other attacking rounds did.

When G2 got to the defense half, they picked Tachanka, the worst defender in the game. Well, it turns out that the Tachanka pick worked extremely well. FYI, the last time G2 Esports picked Tachanaka was during the round they locked the German Na’Vi roster into the auto relegation slot. Is this a sign of G2’s confidence? The ‘interview’ below tells you a lot about how G2 are feeling.

Our budget ran out, so we asked @G2_Sua to interview @G2Pengu.
Watch utill the end to see a plot twist. #SixInvitational pic.twitter.com/uSEW3QLw0k

The Six Invitational 2020 continues Sunday for the second seed decider matches. There will then be a one day break before we head into the quarter-finals for the first round of double-elimination playoffs.