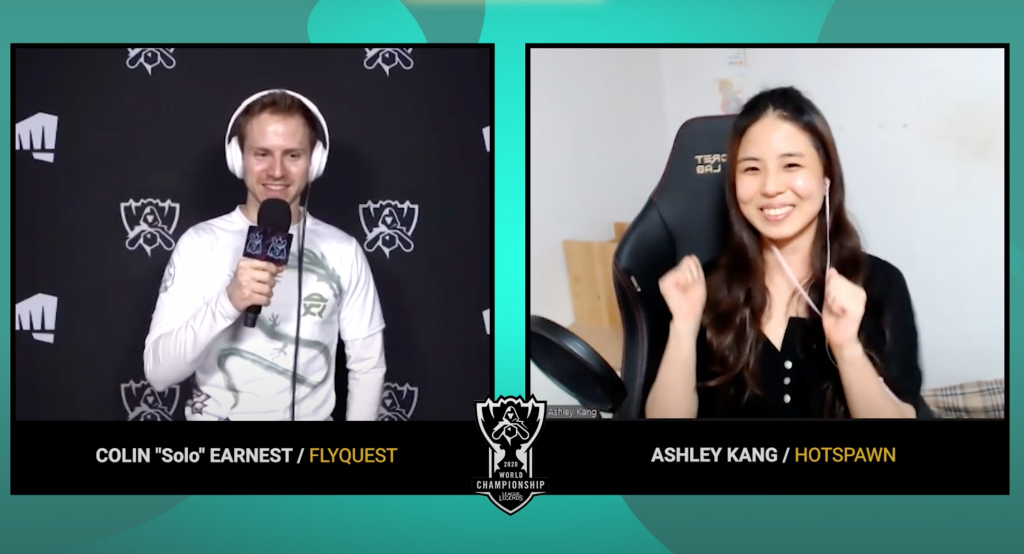 "I think that all the criticism that NA has is fair" Solo said after FlyQuest was eliminated from Worlds 2020.

Though FlyQuest did not make it out of the Group Stage, there is little doubt that the team put the global League of Legends scene on notice after some huge victories. After their final games against Top Esports and Unicorns of Love, Ashley Kang spoke with FlyQuest top laner Colin “Solo” Earnest about how the team pushed forward despite being eliminated.

“We were a little disappointed that we weren’t really playing for anything [after losing to DRX] but we were like ‘okay, let’s just play our gameplay anyways and pressures off. Let’s just try and play the best we can for our own pride,” Solo said. “And maybe being just a little more free helped us cause we were definitely open to that level one and we ended up getting an early lead through just kind of our aggression.”

That freedom helped FlyQuest pull off one of the biggest upsets of the tournament, beating TES. And that free-wheeling, relaxed style of play may play a big factor in underdogs pulling off upsets in future international events.

“I think this whole tournament, the lower teams have realized that the only way you are going to be able to beat like the top dogs is that you kind of just have to take it to them and to not be afraid,” Solo explained to Kang. “You have to be willing to flip the game off of some crazy invade or early fight because otherwise, they are obviously terrific players, they are just going to beat you slowly.”

That discovery came a little too late for LCS teams, with all three North American representatives being ousted in groups. Of course, the internet was fast to jump on the issues with NA League of Legends and it is justified, according to Solo.

“I think that all the criticism that NA has is fair. I think there are things we could do to improve and we are like a smaller region, so we got to be better in ways that other regions might not have to be. And that’s just the bottom line if we actually want to win.” Solo said. The top laner pointed to the infrastructure needing to be fixed but also pointed out that there needs to be a change in attitude in the LCS.

“They just gotta start believing they can actually do it. Because I think for so long it’s just kind of been like a [shurgs] ‘you know, we are never going to be the best region’ but I think we gotta just start buying into it. Early on too, not to show up to tournaments and be like ‘hey, maybe we can win.'”

Despite the early exit from Worlds, 2020 was unquestionably a big on for Solo personally. He claimed the starting role on FlyQuest and helped lead the team to Worlds. Though maybe it was not as smooth as he would have hoped, Solo is happy with where he is.

“What a crazy year. I think the best way I can sum it up is [pause] everything I’ve accomplished is something that I really set out for and I expected of myself at the beginning of this year,” Solo said smiling. “And after last year, I just would have never expected it to be this way. It was just a very strange, roundabout way of getting there but it was awesome nonetheless and I got the best teammates in the world, the best coaching staff, so I’m just super glad I was able to do it with them.”