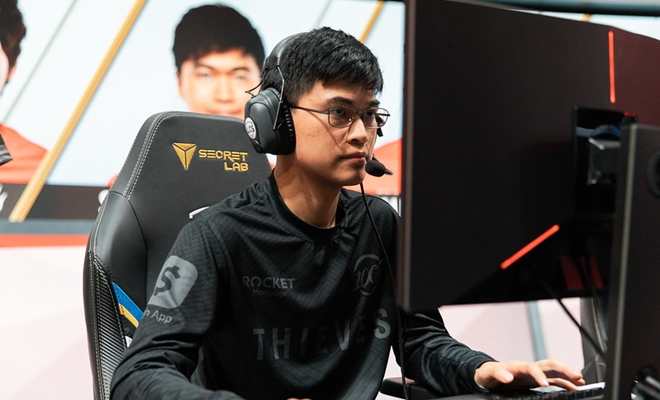 After debuting with 100 Thieves’ LCS team in 2019, Soiligo is getting another shot at making his mark in the LCS with Dignitas. (Photo courtesy Riot Games)

The League of Legends Championships Series went through a huge shift in talent during the 2020 offseason with big names stepping down from play and plenty of young rookies getting their chance to prove themselves. Among the young talents in the LCS for the 2021 season is former 100 Thieves mid laner Max “Soligo” Soong, who’ll be starting for Dignitas.

We sat down with Soligo during the offseason to learn about his growth on 100 Thieves, how he navigated criticism early in his career, and what we can expect from him in 2021.

Hotspawn: To start off, how was your last year on 100 Thieves?

Soligo: Well, I think it was a hard year for everyone. I think a lot of teams definitely experienced a decrease in skill level due to not being able to be in person with each other and not having that connection and having to worry about COVID-19 all the time. For 100 Thieves Academy, we ended up finishing fifth/sixth in quarterfinals for both splits. We went through a lot of roster changes in both Spring and Summer with Philippe “Poome” Lavoie-Giguere and Juan “Contractz” Garcia going up to the LCS and playing with three different junglers in William “Meteos” Hartman, Shane  “Kenvi” Espinoza, and Contractz.

As for me, personally, it was actually challenging having to work with so many different rosters and having to accommodate my playstyle to meet the needs of the team. It definitely taught me the most about how to conduct myself as a player and a teammate, and how I’m able to lead the team in and out of the game by giving people criticism and bringing people together.

Hotspawn: What would you say then is the difference between the Soligo that first joined 100 Thieves years ago, and the Soligo that’s starting for DIG now? In and out of game.

Soligo: I think I’m completely different than how I was two years ago. The reason that 100 Thieves picked me up was because I had a very good mechanical showing at Scouting Grounds. I think that part has stayed, but I swear, everything else– including game knowledge, laning, communicating with teammates in and out of game, macro knowledge– I’ve improved immensely. I actually think another big thing for me is confidence as well. When I first initially played for LCS on 100 Thieves, on top of not knowing that much about the game and not being ready, I lacked a lot of confidence in myself and over the past year I’ve improved on that a lot.

Hotspawn: Would you say your confidence was the most difficult part to improve on? It’s no secret that you were getting a lot of flame and criticism online during your time starting for 100 Thieves. How did you navigate that situation?

Soligo: In terms of facing criticism, I knew that a lot of it was justified and for the most part I was a very open-minded and eager to learn player. Whenever I received criticism, I’d actually take a look at it and see if there was anything I could improve on. Although, at the time, it definitely wasn’t great for my confidence levels [laughs]. Looking back now, I’m kind of grateful for that pressure that I received because I think I’m a much stronger player now because of it.

Usually don't tweet but I just wanted to say I'm very proud of all teammates for growing so much together and ending the split on a win despite all the setbacks we had earlier.

Hotspawn: Was there someone at the org, maybe another player or member of staff, that especially helped you to gain that confidence?

Soligo: I think I’d have to give credit to two coaches, Kelsey Moser and Joseph Jang. In the first year, Joseph taught me so much about the game and about how a mid laner should play the game. Him teaching me all the fundamentals and everything I know now gave me the confidence in myself to actually be able to outperform the other mid laners. Kelsey Moser over the past few years has always been kind of there for me and she’s always been a rock for me.

Hotspawn: Let’s talk about your new team, then. Have you gotten to play with them at all?

Hotspawn: Okay, but I’m sure you guys solo queue together when you’re able?

Soligo: Yeah, solo queue and sometimes we play in houses together.

Hotspawn: Oh, how’ve the inhouses been going for you?

Soligo: Recently there’s been problems with really long queue times and players not being able to get in games. As of the past two games, the inhouses have been picking up and there’s a lot of really good quality games going on at consistent times. It’s been a really good tool for players to test out preseason changes and maybe improve on some things they didn’t get to work on last season. It’s a really good thing for the NA scene as a whole.

Hotspawn: Have there been any players that have stood out to you in inhouses? Or any little rivalries forming with amateur players and LCS players?

Soligo: [Laughs] Not as far as I know. Although I know that a lot of LCS players, when they’re against an Academy or amateur player, they’ll obviously want to shit on them. Same with Academy to amateur. So I guess there’s that kind of rivalry. You don’t want to be the LCS player to lose to an Academy players [laughs].

Hotspawn: So then with Dignitas, they were a team that had a rough 2020. Even though they made playoffs in Summer, it was an eighth place playoffs. What was the conversation like with them that made you want to take up their offer?

Soligo: Honestly the offer came out of the blue. One day they were just like ”oh hey, we’re interested in you for LCS. At the time I was pretty surprised because I thought that most of the LCS rosters had been pretty much locked in. They basically approached me and said they were interested in players who were flexible and hardworking and I met that criteria.

Hotspawn: Nice! Must be a plus to be able to play with your old teammate Aaron “Fakegod” Le as well, right?

Soligo: It’s really exciting. Initially, I wasn’t expecting to play with Fakegod as well. Right after our contracts expired at 100 Thieves we all said our goodbyes to each other. A few days later we found out we had the same offer from Dignitas. Me and Aaron both have really good synergy together and he was one of my closest friends over on 100 Thieves, so we have a lot of trust built up that would otherwise not be there between new teammates. It’ll be really exciting to play with him on DIG.

Hotspawn: Let’s focus on you, then. Most players started playing League because of their sibling or friends getting them into it. Was it a similar story for you?

Soligo: Actually, I started playing League because of an old friend group I had in another online game called Command and Conquer 4. The online community was kind of dying out, so we all decided to make the switch to League of Legends around Season Three. I spent most of my days playing League on the EU West server actually because that’s where they were all at.

Hotspawn: Wait, that’s crazy [laughs]. How’d they react when they found out you went pro? And your family too?

Soligo: I think most of them were excited for me. They were all like “I knew you could do it,” and “you were always the best at this game,” just the usual supportive messages. My family was definitely a bit skeptical at first because they didn’t know anything about esports at all. But once they got to see me play a few matches and do some interviews and live the LA life for a few months, that’s when they started to think this was a real career path and they were happy with it.

Hotspawn: To wrap up then, this will be for your new fans at DIG. How would you describe your playstyle? And you can’t say “supportive” or “aggressive”!

Soligo: I don’t like those words anyway [laughs]. Mid lane is obviously the most important role in the game. And to be a top mid laner, you have to be able to play flexibly depending on the team comps, your teammates, and how the game is going. I think that my playstyle is kind of reflective of that, in that I’m able to morph into whatever the team needs. If they need tank or support, I can play tank or support, if they need someone who lanes aggressively, I can do that as well. That’s what makes me really stand out.

The newly formatted LCS 2021 season kicks off on January 15th with the LCS Lock In.