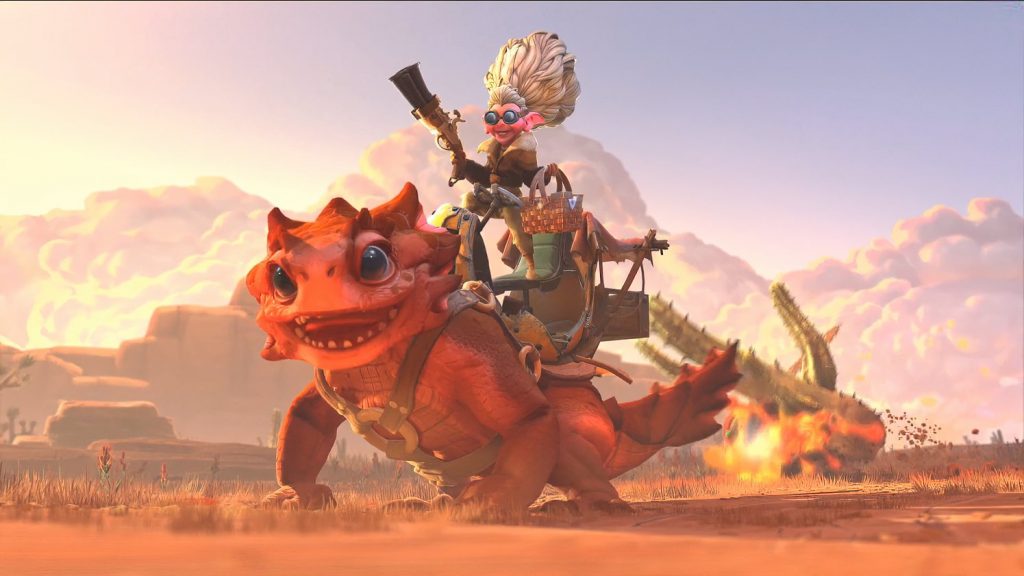 Valve teased the release of new hero, Snapfire during The International 2019. (Image via Valve)

During day four of The International 2019, Valve announced Dota 2’s next new hero: Snapfire. The announcement came as a surprise, during a break between matches in the final series of the day between Evil Geniuses and Team Liquid.

So who or what is Snapfire?

An older Keen lady with a poof white ponytail and a penchant for cookies, Snapfire comes loaded with a basket of the baked treats and a fire-spitting lizard ride. Many are already comparing the lizard to Toothless from the animated movie How to Train Your Dragon. He is certainly an obvious candidate for next year’s TI plushie treatment.

The video introducing Snapfire has a distinctly “wild west” flavor to it. No indication of what flavor the cookies Snapfire bakes are, but they’re decorated with iced Dota 2 hero faces.

Based on the video, Snapfire’s abilities are focused around the baked goods and the lizard. Snapfire appears to be armed with a rifle of some kind, suggesting she’ll be a ranged hero. She grants some kind of explosive buff to allies delivered via the cookies. She also has a mounted leap, during which the lizard spits a fireball that appears to be close range. Lastly, she uses guns mounted on the dragon to rapid-fire at Batrider in the video. Early in the video, we see the lizard mount attacking a hero, but it’s unclear whether this was for the purposes of the video or will actually be part of Snapfire’s toolkit.

If you’re a fan of lore, Timbersaw appears in the video and refers to Snapfire as “auntie,” and he seems quite keen to steal her basket of cookies with the help of Batrider.

The video ends with the promise that she’s coming in Fall 2019. Presumably, we’ll see her before the end of the year then.