SHockWave: “It Is A Bit Overwhelming [Joining A Team Of Veterans]” 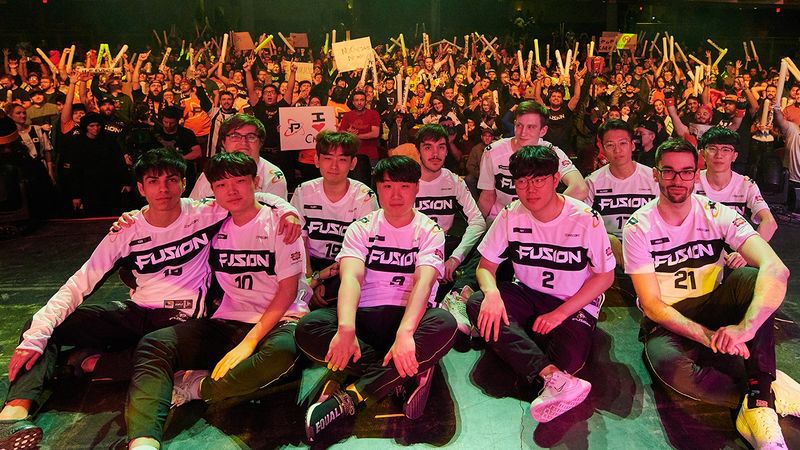 The Philadelphia Fusion roster together at their Homestand (Photo courtesy Blizzard)

The Philadelphia Fusion have consistently been a top four team since the inception of the Overwatch League, but have yet to secure a championship. As the second best team in North America, the Fusion are still searching for their last remaining puzzle pieces to build the ultimate roster, perhaps one that could take down the kings of San Francisco Shock. A week ago, the Fusion announced the signing of Niclas “sHockWave” Jensen, former DPS player for the Vancouver Titans. The Titans had rocky results as a mostly rookie roster, but sHockWave impressed many fans and gained the respect of his hitscan competition.

He SHOCKED everyone with his Overwatch League debut last year, now he'll be rounding out our already terrifying DPS lineup in Philadelphia for the 2021 season…⚡️

Give a huge welcome to Fusion's newest addition, @sHockWaveOW! pic.twitter.com/xg3VrLSD75

We chatted with sHockWave about his big plans for the team and himself for the upcoming 2021 Overwatch League season.

Hotspawn: You had an accelerated career path to the Overwatch League. It feels just like yesterday when you were discovered in the Breakable Barriers tournament. Why do you think you were scooped up into OWL so quickly?

sHockWave: I like to think because of my skill and that I’m actually good at the game [Laughs]. But I tend to also think that it has a lot to do with the role I play, because I think one of the reasons why people started hyping me up or seeing my name is because I play hitscan. I think that role in itself is kind of a flashy role, it’s like playing striker in football. Of course everyone has their important part in the team, but mostly from the spectators side they’re going to notice the kill feed. I’m kind of blessed to be able to play a shiny pop off role. If it wasn’t for the role, I don’t think I would be where I am today, for sure. I think in Tier 2 (Contenders) it’s more individually skilled based. You’ll have someone who pops off, so he sticks out a bit. In the League, there’s more behind the scenes that value a player.

If you go against the best teams and you play the exact same heroes, I don’t know if it’s the best winnable situation that you put yourself in.

Hotspawn: You first joined the Overwatch League under the Vancouver Titans banner. How was your experience on the Titans?

sHockWave: I think overall I’m pretty happy about it because it was my first shot at the League [Laughs], and it was fun and exciting. I think the situation was unique, it was a bit rushed, sometimes it was kind of rough. Especially with the hero pools and all those meta changes that the league did because sometimes you were playing a composition where us as a team wouldn’t have any experience on. Our coordination would have been all over the place, other teams had an advantage sometimes. But I think sometimes it would have been better to experiment with some crazy heroes. I don’t know… If you go against the best teams and you play the exact same heroes, I don’t know if it’s the best winnable situation that you put yourself in. But on the other hand, it’s really hard because you can’t just come into the league as rookies and play some funny heroes and everyone is going to think you’re trolling around.

So I would say overall it was pretty positive, but I think for me, it was annoying to not be there in person with your teammates. I think it affects the team overall, how quick you bond with people and that’s going to affect the game itself. Playing [online] was also not too nice sometimes. We weren’t like a top team but I think it was important to show people that we can actually compete at that level.

Hotspawn: You’ve joined the Philadelphia Fusion. Could you tell us the story about how this opportunity came about, and why they picked you up?

sHockWave: I think what makes me attractive as a player to coaches and managers is my flexibility in-game. A lot of people acknowledge me for it or respect me for it on Vancouver, to play not only the hard hitscan heroes like sniper heroes but also somewhat flex to some other characters like Echo, which I thought I did decently good at [laughs] most of the time. I definitely think [flexibility] is probably the main thing. I think the state that Overwatch is in – flexibility is really important because there are so many changes. It’s not just GOATs for like a complete year, and you just need to one-trick on a role and that’ll do. I think flexibility is pretty valued.

But outside the game, I think a lot of people see me as not too shy, I’m pretty open I would say. I like to think I’m not too boring at least [laughs]. It’s also a good mix between personality traits and gameplay. Coaches — they also want a guy they can easily work with.

It is a bit overwhelming [joining a team of veterans]

Hotspawn: While on the Titans you were competing with newer OWL talent, but now you join a team of Overwatch veterans. Is that intimidating?

sHockWave: As intimidating as it is, I feel like because I did play in the league for half a season, that’s kind of put most of the nerves and intimidating feelings about stuff like that away. But it’s still kind of weird, because I can still remember watching YouTube highlights of some of the players and now you’re suddenly gonna play with them [laughs]. It is a bit unreal, it is a bit overwhelming. But I think it’s gonna be exciting because I feel like I’m gonna be some fresh blood and I hope to be a good challenge for them. I feel like they hopefully will gain some proper motivation of me as well to play the game. Almost like a friendly competitor in the team you could say I guess [laughs].

Hotspawn: With Mano, Carpe, and Alarm, this is looking like a mixed roster. Will you be trying to learn Korean, or will they learn to communicate in English?

sHockWave: I’m pretty interested in other languages. I don’t know if I’ll go all in on Korean and take proper lessons. I think at least I know some of the basics, but I think in Overwatch it’ll be the simple shotcalling words in English. Even though it’s mixed, I like to think that a lot of EU people like Danes (Citizens of Denmark) and UK (United Kingdom) kind of share the same humor. I think Koreans, both of us can be pretty sarcastic about stuff. You can call your teammates trash and they won’t take it personally. But on the other hand, they can also be really serious and so can we. So I think it’s going to be really nice. There’s always a fine balance between being funny and trying at the game, so I think that’s pretty healthy.

Hotspawn: With the upcoming OWL season still being far away, the Philly roster is starting to take shape. What are your personal goals for the next OWL season?

sHockWave: I like to think I have three goals for myself. I have one goal that’s in progress, a more realistic goal, and an ultimate goal.

The one goal that I have on the way is to just enjoy and have fun, because I think that’s important to not get bored or get depressed. I think a big part of it is an experience. It is of course a competition, it’s a job, it’s real, but it’s also an exciting experience. So that’s like my goal along the way.

My more realistic goal for myself in the future, I would like to be an MVP candidate for next season. I think the ultimate goal is winning the league. I don’t think it’s unrealistic but it’s for sure the ultimate goal, as of right now.