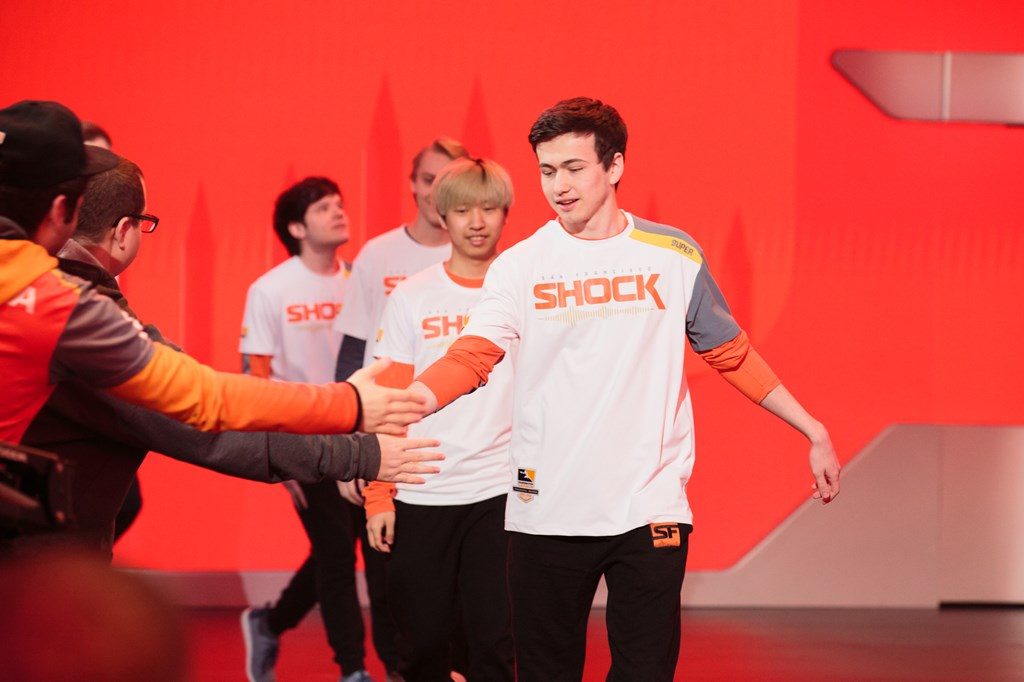 The Shock were looking for redemption against the LA Gladiators this week. (Photo courtesy Robert Paul - Blizzard)

Week 9 of the Overwatch League kicked off on Saturday afternoon, featuring three matches from the North America region, as the Chinese games have been delayed until Monday. The SF Shock rematched the L.A. Valiant, the L.A. Gladiators played against the Dallas Fuel, and the Toronto Defiant matched up against the Washington Justice.

In all three games, fans were treated to a unique Torbjorn/Reinhardt death ball hero meta. As it turns out, when you ban Mei and McCree, Torbjorn suddenly becomes super viable in the Overwatch League. Who knew? Yet another discovery about Overwatch brought to you by hero pools. Every single team who played Saturday combined Reinhardt and Torbjorn in various ways.

It was an exciting afternoon of matches, filled with aggressive Reinhardts, insane Lucio boops, and some clever Torb turret placements.

SF Shock redeem themselves in rematch against the L.A. Valiant

The San Francisco Shock were able to take vengeance on the Los Angeles Valiant on Saturday, defeating the Valiant in a 3-1 series. Saturday’s Shock victory came only a week after San Francisco lost to both the Valiant and Gladiators in consecutive matches in Week 8. This match was an important opportunity for the Shock to change the narrative in their favor and show their fans what made them Season 2 champions.

Although the Shock’s lack of teamwork and odd strategic decisions throughout Week 8 landed them an 0-2 weekend, this week the Shock appear to have addressed many of those issues. San Francisco looked much more coordinated and confident in this match.

During the first map of the series on Nepal, the Valiant lost 0-2 after failing to break the Shock’s Reinhardt, Zarya, and Torbjorn defense. Matthew “super” DeLisi’s Reinhardt and Seonchang “ANS” Lee’s Torbjorn were the centerpiece of the Shock’s strategy this week. The Shock took up strong positions and then planted their turrets in difficult to destroy places. By dealing consistent damage to the Valiants front line, the Shock were able to quickly build ultimates.

The primary force behind the Shock’s victory this week was their support line and Hyo-bin “ChoiHyoBin” Choi’s performance as D.Va.

Throughout the match Minki “Viol2t” Park and Grant “moth” Espe managed to get value out of every team fight. Both players consistently used their support ultimates at crucial times. Viol2t showed off Moira’s legendary healing ability in Overtime on Eichenwalde by healing all five of his teammates back from critical in the midst of the most important team fight in the series.

Ultimately, the Shock went on to win that team fight, with the help of Moth’s skillful boops as Lucio. Moth showed off his championship calibur Lucio throughout the series, coming up with numerous boop kills as Lucio on Eichenwalde. He even had four kills in the killfeed at one point during the game.

Throughout the series, both Viol2t and Moth kept their Super alive, even when the Valiant were applying heavy pressure. Support was a particularly challenging role this week. With Mei and McCree banned there was very little crowd control to slow the death ball coming straight for the main tank. Despite the increased pressure on Reinhardt, the Shock’s support core were able to consistently keep him alive through team fights.

The real star of the week was Choihyobin. Last week, Choihyobin appeared to be struggling as Zarya. He was even replaced during both of the Week 8 games by Sinatraa after half time. This week, Choihyobin was able to return to his speciality: D.Va. As D.Va, Choi Hyo Bin dominated throughout this series by dropping huge bombs and dealing massive damage. On the third map, Dorado, Choihyobin clutched the final team fight with a D.Va bomb that killed both of the Valiant supports.

During Eichenwalde, Choiyobin single handedly swayed multiple important team fights in the SF Shock’s favor. Just as this game was about the Shock’s redemption, this game was also about Choiyobin’s redemption, and he definitely delivered. Choihyobin was named player of the match at the conclusion of the series. 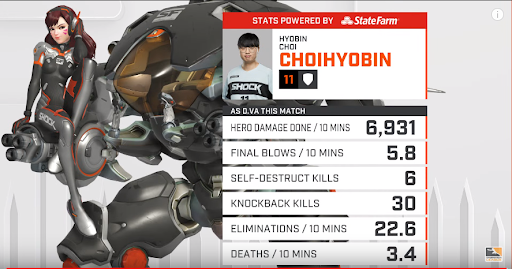 L.A. looked great throughout the series. During every game, the Gladiators were able to out position the Dallas Fuel. In many ways, this week’s meta was very similar to the GOATs Meta. Many teams, including L.A and Dallas, played Moira and Lucio on Support with Reinhardt and D.Va on the tanks. As a result, the Gladiators were rewarded for their aggressive playstyle, in which OGE on the Reinhardt and Space on the D.Va spearheaded the brawl based offense.

The L.A. Support core, Benjamin “BigGoose” Isohanni and Jonas “Shaz” Suovaara, played exceptionally Saturday. Not only did they pull off well-timed ultimate abilities; they also made big offensive players, such as when BigGoose booped off opposing Lucio Jonathan “HarryHook” Tejedor Rua to take the first point on Oasis.

Although all of the Gladiator players performed well Saturday, it was Min-seok “OGE” Son who captured the player of the match award. OGE played Reinhard throughout most of the match. He consistently built Shatters faster than the Fuel Reinhardt, Gamsu, and OGE also dealt the majority of his team’s damage. What’s even better is that OGE formerly played for the Dallas Fuel, which added to the drama of his performance. 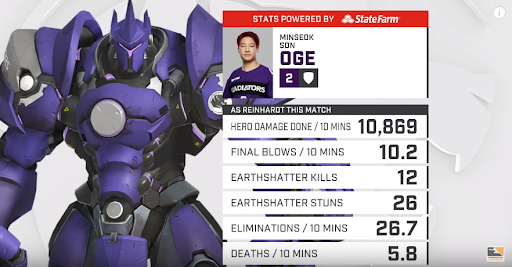 The 15th ranked Toronto Defiant defeated the 16th ranked Washington Justice in a 3-1 series on Saturday. Although both teams possess rather disappointing 2-4 records, the match was still highly entertaining. This was the first match played on Saturday, and as such was the first peek at this week’s Torbjorn and Reinhardt meta.

The Justice and Defiant DPS both played really well. In fact, both teams played very similarly throughout the match. The Defiant applied an aggressive play style which was similar to the Gladiators’ playstyle. The deathball strategy allowed the Defiant to quickly overcome and out damage the Justice through aggressive and brawy engagements. The Defiant’s high level of aggression and organization caught the Justice team off guard several times, even without the Defiant using any ultimates.

Adam “Beast” Denton was a close contender for player of the match, considering his absolutely dominant performance as Reinhardt. Beast consistently opened up engagements and laid down massive earth shatters. At the end of the fourth map, Beast absolutely destroyed the justice with a five-man Shatter to take the series.

Both Ethan “Stratus” Yankel and Corey “Corey” Nigra played Torbjorn during various games in the match. It was fascinating to see the obscure hero played in the professional context for the first time. Yes, Torbjorn has been played here or there in the Overwatch League, but week 9 was the first time that it was the expected meta.

Kristian “Kellex” Keller, who played Lucio throughout the match, was named player of the match. In addition to his significant healing stats, Kellex showed off perfect ultimate management and made a variety of influential boop plays. 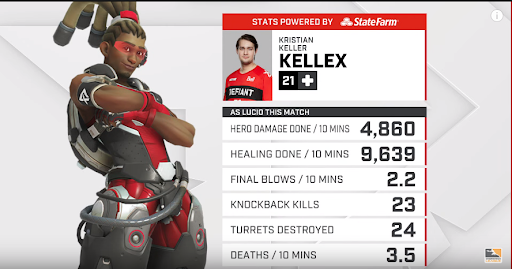 It was fun to see such an exciting and aggressive hero meta. Saturday’s matches felt like a call back to the days of GOATs. Teams were playing highly aggressive, brawly heroes like Reinhardt, D.Va, and Lucio. Although the Torbjorn deathball meta was aggressive and brawly like GOATs, it didn’t feel like team fights went on forever like the GOATs meta. The teams who played in Saturday’s games fully embraced the spirit of speed and aggression, which was fun to watch.