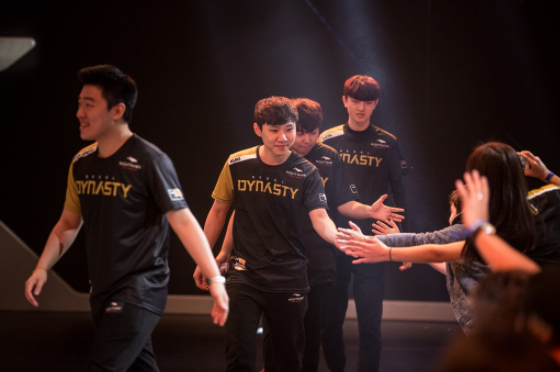 Some teams appeared to be shaking off the rust, while other teams came prepared to win.  None of NA region games for week eight were particularly close, with every match ending in a 3-0 or a 3-1 series score.

First, the L.A. Gladiators defeated the Shock on Saturday, then the L.A. Valiant defeated the Shock Sunday, leaving San Francisco 0-2 for the weekend. The Los Angeles Valiant upset the Shock in a 3-1 brawl, in which the Shock never quite seemed to get comfortable or execute any of their plans. Not to take anything away from the Valiant’s impressive win, but the Shock looked surprisingly low tier in week eight.

The Shock performed decently in the first half of the series, however their halftime adjustments were less than ideal. During the second half, the Shock took Jay “Sinatraa” Won off DPS and put him on Reinhardt for some reason. Sinatraa is known for his impressive Zarya abilities, but he is not known for his Reinhardt.

The L.A. Valiant, on the other hand, looked strong throughout the series. The Valiant’s strategy was all about adapting to the map, enemy composition, and hero pools. The team showed four different tank cores at various times, demonstrating their ability to fluidly play whatever hero was needed. This constant flexibility appeared to be highly effective against the less-versatile Shock team.

The Valiant players really seemed to vibe with their teammates. Their DPS were aggressive and confident and the entire team was attentive and supportive to one another. The Valiant’s teamwork looked awesome.

Kyle “KSF” Frandanisa played particularly well and earned player of the match. KSF played McCree, Mei, Doomfist, and Pharah. The fact that he was able to play so many DPS at a high level is a testament to KSF’s mechanical brilliance.

Only a top tier McCree could show up the Shock – lucky for us, we have one. Give three cheers for our @FrontierCorp MVP, @yung_ksp!#OWL2020 #WingsOut #FrontierMVP pic.twitter.com/eaZZ7d3RDL

A notable difference between the Valiant and the Shock was that the Valiant stuck to the same roster throughout the series, whereas the Shock were constantly substituting players in and out of the game. The Shock rearranged roles and roster several times throughout both of their week 8 games. In both matches, Sinatraa switched between DPS and Tank after half time. Although Sinatraa is obviously a great tank, having your star DPS play tank is definitely a risky choice.

In total, SF played ten different players throughout the series against the Valiant, at various times playing:

In comparison, the Valiant stuck to their starting six through the entire series. There is something to be said for playing a team of six players who practice together all the time and only substituting in players when it has already been practiced or when absolutely necessary.

Overall, it seemed like the Shock adapted really poorly to the week eight meta. During both games, they looked unprepared and almost lost at times. Their lack of coordination and consistency was ultimately detrimental to their gameplay. Obviously the Shock players are all incredible, championship calibur Overwatch players, but at some point you have to group up and execute a strategy if you want to win.

While San Francisco lost to both L.A. teams, Seoul Dynasty beat both of them. The Seoul Dynasty defeated the Los Angeles Gladiators in a 3-0-1 series on Sunday and the L.A. Valiant in a 3-0 on Saturday. Although we have only seen Seoul play two games so far this season, they look stronger than ever before. Sunday’s victory cements Seoul’s status as a clear contender for this year’s OWL championship.

The Dynasty came in with a clear strategy that they stuck to throughout the series. Seoul played a double shield strategy, with an emphasis on survival over aggression. This strategy paid off, allowing them to control the team fights against the at times overly aggressive Gladiator DPS. The key to this strategy was Dong-eon “FITS” Kim consistently winning his duels throughout the match, even when Seoul appeared to be on their back foot.

FITS gained the title of player of the match, after laying down insane damage as both McCree and Hanzo throughout the series. FITS was able to easily contain Ji-hyeok “birdring” Kim’s Tracer, preventing him from harassing the Dynasty support line.

The Gladiators also came in with a plan. They planned to dive on Seoul using Doomfist and Reaper to rip through Seoul’s defensive play style, but when the plan was failing they stuck to it anyway, to their detriment. L.A. DPS Gia Huy “MirroR” Trịnh was on Doomfist long after he was clearly being countered by FITS McCree.

The Gladiators won a lot of team fights, but the Dynasty played a better neutral game giving the Dynasty a consistent economic advantage. The Gladiator’s struggle to make something happen serves as a warning to other Overwatch teams that this season is about adapting to the changing hero pools each week, not about mastering a single strategy and sticking to it.

Atlanta returns with a stylish win over Florida

After a few weeks off, the Atlanta Reign returned with style on Sunday by beating the Florida Mayhem in a 3-0 series. Coming in with a 2-3 record, Florida is not known as the strongest team in the league, however it was still impressive to watch the Reign execute on their favorite Double Shield strategy. This victory improved the Reign’s record to 3-1, while Mayhem leaves this weekend with a 2-4 record.

Both Florida and Atlanta utilized the Orisa/Sigma double shield meta which was prevalent throughout the Overwatch League Season 2 playoffs.  It was very clear that both these teams drilled their double shield style, but the Reign showed that they are without a doubt the stronger squad.

Although the tank core stood out, Edison’s Tracer play was the highlight of Atlanta’s performance. Tae-Hoon “Edison” Kim dominated the mirror matchup against Jun-ki “Yaki” Kim. Edison not only ravaged the Mayhem’s back line, he also landed multiple influential pulse bombs which tipped key team fights throughout the series.

.@Edison_OW is a scary sight to see when he is in your backline! #LetItReign #OWL2020

Edison ended up with nine pulse bomb kills, and he didn’t even play the third game in the series. For his incredible plays, Edison was awarded the player of the match.

The Overwatch League changed how the hero pool functions, and not just by having Soe Gschwind in her pajamas shuffle and line up the tickets on her bedroom floor for her cat to select from.

This is the best way to ban ever devised 🐈 #OWL2020 pic.twitter.com/jtPGg7DMdP

The new hero pool selection process is weighted so that heroes who have higher pick rates are more likely to be banned.

This new change should make the Hero pools more likely to influence the meta, since staple characters with high pick rates are more likely to be removed for a week.

The Overwatch League team decided to bring in Nori the cat to help them with their selections. After several minutes of cat-related hijinx, we found that the heroes who will be banned from next week of OWL are:

If there is one thing Overwatch League teams can learn from week eight of competition, it is that season 3 of OWL is all about adapting to win matches. If teams fail to adapt to the new hero pools or enemy strategy, they will surely fail no matter what level of individual skill their players possess. Past seasons have focused heavily on individual skill and mastering singular metas, but this season is forcing OWL teams to consider what will work on a weekly basis, practice strong teamwork, and adapt when their original plan is being countered.