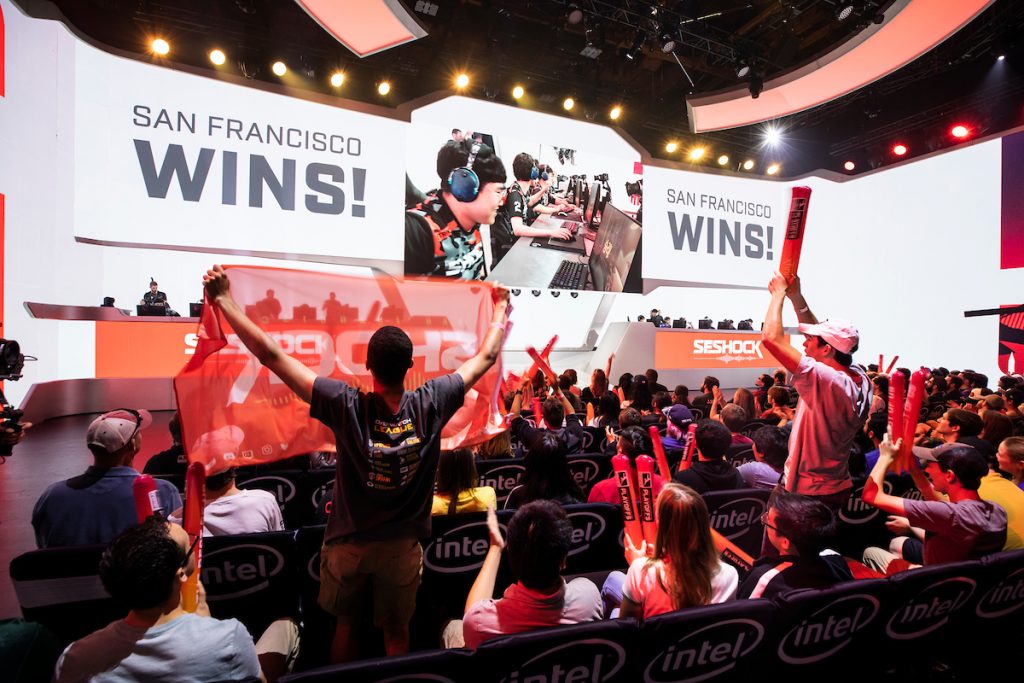 The final sees for the Countdown Cup are set, with the Shock and Paris leading NA while the Dragons and Hunters lead APAC. (Photo courtesy Ben Pursell - Blizzard)

The final week of the Countdown Cup qualifiers took place this past weekend. In the North American division, the San Francisco Shock just barely took the top seed over the Paris Eternal, with the Philadelphia Fusion and the Florida Mayhem rounding out the top four. In the APAC division, the Shanghai Dragons seized the top seed and first round bye, followed by Chengdu Hunters in second and Hangzhou Spark in third. Both the Shock and the Dragons are looking for redemption after losing in their respective regions in the Summer Showdown tournament.

This weekend’s competition served as a preview for the tournament meta next week, since Hero Pool restrictions were inactive. With Orisa available to play again, we saw the return of the double shield barrier meta, in addition to dive compositions. Based on this week’s games, double barrier strategies are a possible answer to some of the dive compositions which have been so prevalent since the Summer Showdown.

The San Francisco Shock replicated their success from the qualifiers of the May Melee and the Summer Showdown tournaments, securing the top seed in North America for the Countdown Cup. In order to earn the top seed over Paris the Shock needed to sweep the Houston Outlaws in a series on Saturday. They ended up accomplishing that goal with relative ease.

Going into the tournament next week, everyone is wondering if the Shock will reclaim their throne after losing to Paris in the semifinals of the Summer Showdown. When they lost in that tournament, it seemed that a key factor holding them back was their lack of a strong Genji player. To help fix that issue, the Shock added Genji player Taiyo “ta1yo” Henderson to their roster. We got a preview of ta1yo’s Genji skills last week, but this week they primarily tested out Dong-jun “Rascal” Kim on the Genji.

The Shock also substituted in Main Tank Matthew “Super” Delisi to play Genji at times throughout the series. This was the third week in a row that Super played Genji for at least one map. Although many read Super’s substitution as disrespectful, a sort of flex on the teams that the Shock is beating, Super once again insisted this week that he is earnestly trying to master Genji.

I understand why, but the fact that my genji has been memed up to the point where people believe super genji=trolling is very unfortunate, especially when i grind it in ranked and play scrims all week with it but what can you do. Ggs @Outlaws

It is still hard to take that line seriously though, when the Shock have both Rascal and ta1yo on their roster, both of whom are better Genjis. We’ll see how serious the Shock are about Super’s Genji during tournament play next week.

After three sweep victories in a row over the past two weeks, Paris faced off against the Washington Justice on Saturday hoping to wrap up the top seed in North America. The Justice were able to pick up one map, breaking the Eternal’s winning streak and ultimately costing them the top seed. However, Paris still qualified in second, with a perfect 4-0 record and a near perfect +11 map differential.

Over the past month, the Eternal have experienced one of the most exciting rises of any team in Overwatch League history. They went from an average ranked team in the first half of the season, to becoming one of the most feared contenders in the North American division, all in the span of a few weeks. During the Summer Showdown, they made a Cinderella run as the eighth seed, earning their way to the Grand Finals where they defeated the Philadelphia Fusion to lay claim to the first title in Eternal franchise history. Paris will be looking to repeat that performance in the Countdown Cup.

Yeong-han “SP9RK1E” Kim’s amazing Genji mechanics have been a large part of the Eternal’s sudden surge of success. The rookie player has proven to be one of the most talented flex DPS stars around. Although the entire roster is playing really well, SP9RK1E has been the difference maker for this team, tipping the balance of so many battles and consistently outdueling opposing DPS.

The Eternal has been expanding their arsenal of strategies too. On top of dominating the dive meta the past three weeks, Paris has also shown off a total of 14 separate team compositions in the last four matches. That level of versatility is impressive and speaks to both the teamwork and mechanical mastery of the Eternal lineup.

The Philadelphia Fusion finished off their Countdown Cup qualification strong, taking home two clean wins. They kicked things off on Friday, sweeping the Dallas Fuel easily. They followed up that victory on Sunday with an even more impressive 3-0 sweep over the well regarded L.A. Valiant.

The Fusion have proven themselves to be a tremendously versatile team. Led by their star DPS Jae-hyeok “Carpe” Lee, Philadelphia is capable of playing nearly any meta at the highest level. Despite their technical brilliance though, the Fusion always seem to fall short when the chips are down. The Fusion have attended multiple Grand Finals for Overwatch League titles over the past few years, only to be denied each time. Most recently, they suffered a heartbreaking loss in a very close 3-4 loss to the Paris Eternal during the Summer Showdown Grand Final match.

The Fusion will enter next week motivated to claim revenge and their first ever Overwatch League title.

The Florida Mayhem defeated the Los Angeles Gladiators in a 3-1 contest on Sunday. With the victory, they just barely secured the fourth seed and bye round in the Countdown Cup. In the end, the Mayhem and the Reign tied in both wins and map differential during qualification. However, since the Mayhem defeated the Reign back in week 24, the higher seed was given to them.

The Mayhem have shown real signs of life in the second half of Season 3. In the May Melee, they made it all the way to the Grand Final match, where they lost to the Shock to take second place. Following their success at the May Melee, Florida struggled with the new dive meta introduced in the lead up to Summer Showdown tournament. However, in qualifications for the Countdown Cup they appear to have overcome their issues and figured out a set of strategies that work for them.

The Reign defeated the Dallas Fuel in a 3-1 series on Sunday to lock down the #5 seed. The most notable player in the match was Blake “Gator” Scott, who returned to the starting roster to play Orisa in the Reign’s favorite team composition: Double barrier. Gator had a dominant performance and won the player of the match.

Despite some roster changes, the Atlanta Reign are looking strong heading into the end of the season. They lost two members of their roster after the Summer Showdown, when Andrej “babybay” Francisty and Steven “Kodak” Rosenberger retired from playing in the Overwatch League in mid July. They were replaced with Overwatch DPS prodigy Garrett “Saucy” Roland and former Contenders MVP support player Seung-hyun “Lr1s” Kim.

In the absence of Babybay, some were wondering how well the team would perform. Over the past couple of weeks, Saucy has put the doubts of many to rest with his excellent Genji performances. If anything, the team might be playing better than they were before the loss of Babybay. On Saturday, we also got to see Lr1s in action. He too looked right at home on the team, though with only one match under his belt it is hard to make a full judgement.

The Reign appear to be taking their roster shake ups in stride, and you can never count them out in tournament play.

As expected, the Shanghai Dragons took the top seed in the APAC division away from the Chengdu Hunter by defeating the New York Excelsior in a 3-1 series on Saturday. The Dragons looked as dangerous as ever in the double shield meta and appeared well prepared for the Countdown Cup.

The Dragons have dominated their region this season, however, they were upset by the Guangzhou Charge in the Summer Showdown Grand Finals at the beginning of July. That loss was the first refutation of the Dragon’s control over the APAC division all year, and showed serious weaknesses in their game. The Countdown Cup is their chance to reassert dominion over APAC.

Shanghai will have a bye directly to semifinals, where they will face the winner of Saturday’s quarterfinal match between Guangzhou and New York. If the NYXL win, the Dragons will have a rematch of this week’s series, which they easily won. If Guangzhou wins, Shanghai will have a chance to take revenge on the team that dethroned them in the Summer Showdown.

After struggling throughout most of season 3, Chengdu finally showed signs of life in the Coundown Cup qualifiers. The meta over the past few weeks has favored the Hunters affinity for Hammond and Genji dive compositions, allowing them to pick up three impressive wins in a row over the Spark, Dynasty, and NYXL.

Their impressive three victory run landed them the third seed, despite the team widely being considered the weakest in the APAC division. Chengdu will face the London Spitfire next week, hoping to finally advance past the quarterfinal round after being denied in both the May Melee and the Summer Showdown. Although the Spitfire are the lower seed, they have defeated the Hunters twice so far this season.

We will have to wait and see if the Hunters can carry their current momentum into the Coundown Cup next week, or if the Spitfire will be able to overcome Yi “JinMu” Hu’s Genji and Ding “Ameng” Menghan’s deadly Wrecking Ball.

Looking ahead to the Countdown Cup

The tournaments will feature a combined prize pool of $275,000 USD and offer teams the chance to improve their regular season records as the season approaches its close. Additionally, the Countdown Cup will be a great opportunity for teams to prove what they are capable of leading into the upcoming playoffs.