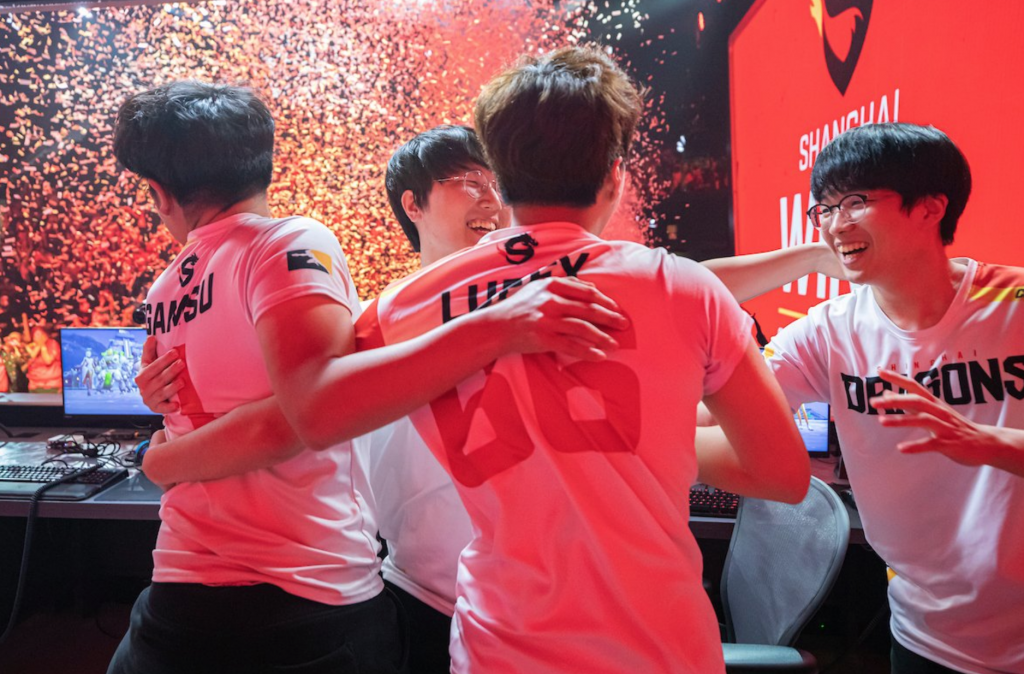 The Shanghai Dragons shocked the world by winning the Stage 3 playoffs as the No.8 seed (Photo courtesy of Blizzard Entertainment)

In arguably the biggest Cinderella story the Overwatch League has ever seen, the Shanghai Dragons beat the San Francisco Shock in an epic seven map grand final series that truly brought us the best that Overwatch has to offer. This win netted the Dragons the title of Stage Three Champions and $200,000.

It’s not a far leap to say that most fans of the league didn’t have the Dragons down for winning the Stage Championship. Shanghai only narrowly avoided being kicked out of the top eight after defeating the Philadelphia Fusion at the Atlanta Homestand weekend.

In the eighth spot, they started their journey to the top by facing off against the top-seeded team the New York Excelsior. The NYXL were undefeated in Stage Three but they managed to uphold their playoff curse and choked during the match against the Dragons. This meant that the Dragons would face the Vancouver Titans, who have still only lost one match in regular season play and, in battle only fit for the pages of an anime, the Dragons single-handedly destroyed the Titans dreams of snatching a second stage championship. This left only the Shock between the Dragons and their full redemption arc to be completed.

Map One started with an interesting roster swap from the Shock – confusing both fans and analysts. The Shock decided to swap in their substitute DPS players Strike and Architect as well as their main tank Smurf. It was a shock, no pun intended, that left the Dragons a little off kilter but Diem on Widowmaker helped carry secure a win on Oasis alongside DDing on Pharah. Diem’s snipes and DDing’s unrelenting pressure made their Oasis win look easy albeit after they gave a point to the Shock in University. Oh, and Diem’s five player kill streak to win The Gardens in Overwatch was a clip worth a rewatch.

After the disappointing match on Oasis, the Shock switched up their roster bringing back their all-star players Super, Sinatraa and Rascal. They chose Numbani for the map and the game was on. The idea that these three were chosen over substitutes to start is still mind-boggling but we digress. The Shanghai Dragons completed Numbani in record time, securing all points and banking a nice chunk of time. Rascal on Baptiste was, well, Rascal on Baptiste. The commentators even admitted that the Shock perform better when they have Baptiste in the lineup. But for all the hype around the trio back in the game, the Shock just had a combination of lackluster plays and poor ult usages. Shanghai went into the ‘half-time’ 2-0. It was starting to look like it would be a clean sweep for the Dragons if the Shock weren’t able to muster up their Stage Two inner-Champions.

The third map of the series was again chosen by the Shock but instead of choosing Paris, a map they had a better record on, they chose Horizon Lunary Colony. Both teams were able to complete the map – with Shock banking almost four minutes and Shanghai only putting two minutes in the bank. It didn’t matter though because DDing absolutely demolished the Shock with his Pharah plays. The Dragons won in overtime putting them one single map away from winning the title.

The Dragons went into Havana, chosen again by the Shock, knowing that they were a single step from winning. Perhaps it was pressure or perhaps it was the Shock finally understanding the Dragons’ playstyle but this is where things began to fall apart. The Shock were stopped from completing their run on Havana, starving them of a full map completion meant the Dragons just had to get past the Shock to win. The Shock became the literal definition of an immovable object and refused to let Shanghai complete even one point in the capital city of Jamaica. With the beginning of the Shock’s attempt at a reverse sweep knowing that one wrong move meant they would lose the series.

Shanghai picked the sunny location of Ilios for the next map – a map perfect for the Pharah King DDing. It wasn’t a good map for the Dragons even with open skies for DDing. It was a back and forth with the map, the Dragons managing to take one point but their energy was fading and the Shock capitalized – taking Ilios for themselves.

At this point, it felt like the chances were high that the team that picked the map would lose the round. Map six was on Eichenwalde, there were some amazing plays made by both teams. DDing and Rascal fought in the skies with their accompanying Mercy’s to support them,  Sinatraa pulled off some spectacular EMPs (one five-man to help secure them forward momentum on the payload), and a super Super ult on Winston to secure their third point on the first round. The second round on Eichenwalde saw the Dragons attempt to claim the control point but fail to after a well-timed EMP by Sintraa and a perfect Rocket Barrage by  Rascal. The matches were intense and up until this point, the Dragons had always been just one win away from winning but now, so were the Shock.

The Dragons took the Overwatch League to Dorado for the last map of the series. With a score of 3-3, the winner of this map would become the Stage Three Champions. Without sounding too cliche, the series for the Dragons felt like it was being carried on Pharah’s wings and through the lens of Diem’s Widowmaker. The Shock’s attack saw them push the cart to Point A. All the Dragons had to do to win was get past point A and they’d win. In a beautiful Dragon fashion, the hopes of a reverse sweep by the Shock was quickly destroyed by the precision and unrelenting attitude of the Dragons. They won the series 4-3.

🏆STARTED FROM THE BOTTOM NOW WE HERE🏆

After a wild 7 maps we come out the stage 3 champs! We couldn’t have made it this far without your love – so here’s to you!

Like, RT, and leave a celebration gif below. We’re giving away 1 SHD keyboard, 5 jerseys, and 10 goodie bags! pic.twitter.com/eLlygrU5RN

The Shanghai Dragons and their fans are celebrating not only a Stage Three Championship but also the understanding that they went from being the worst team in the league during their inaugural season to champions. The team might not have anyone from the original roster, the Dragons have shown us the true meaning of perseverance and dedication. Although we’re hoping without the 12-14 hour practice days!