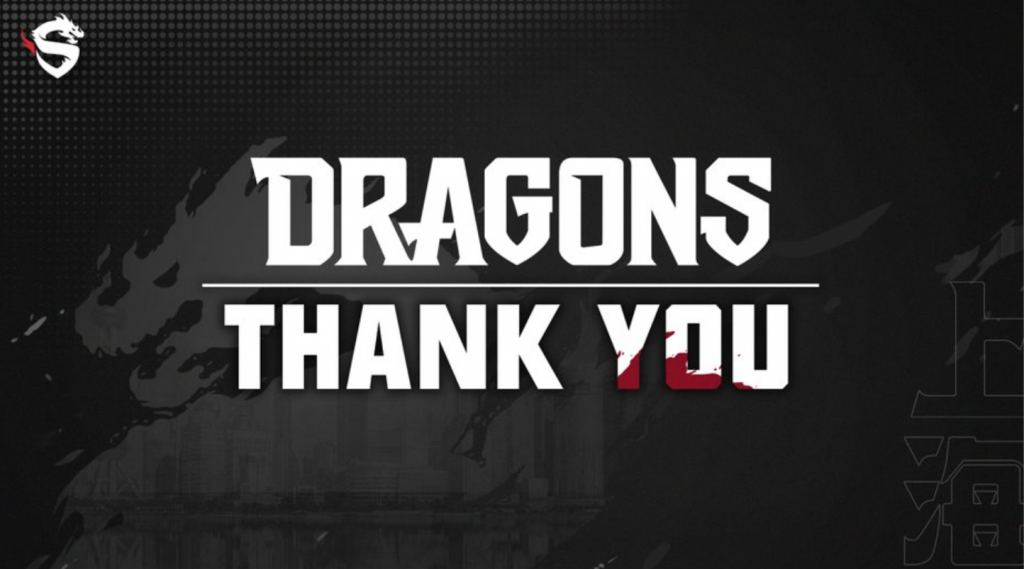 All five players spent most of the season on the bench, despite many of them being star caliber players. (Photo courtesy Shanghai Dragons)

A letter from our GM Van pic.twitter.com/4MygEC8SMo

“After serious and deep communication with them, we fully understand and respect their desire for more opportunities in matches, and we are quite sure that they will be able to have great performances in OWL,” explained Van in the open letter. “Although it’s time to say goodbye to them, the Shanghai Dragons and all of the staff will always support them. We will continuously help them to find a new team as they enter a new stage of their esports career.”

Geguri was a founding member of the Shanghai Dragons. She first gained international recognition while playing on the Korean competitive ladder as Zarya in the early days of Overwatch. She was so good at the game that several opponents accused her of cheating, prompting her to create a video where she recorded her mouse movements. The video cleared her of the cheating accusations and her story went viral. In 2018, Shanghai Dragons signed her to their inaugural season roster. Not only is Geguri one of the greatest Zarya players in the world, she also is notable as the first and only female player to be signed to an Overwatch League team. Unfortunately, she did not see much playtime in 2020, as Jun-woo “Void” Kang ended up filling the starting Off-Tank position throughout most of the year.

[EN]
Since joining us in the inaugural season, Geguri has been a joy to our team and inspiration to so many. From incredible tank plays all the way to dad jokes, she can do it all, and we hope they only continue in the future. pic.twitter.com/J6Zz2qg5cT

Diya was also a founding member of the Dragons, joining a few months before Geguri was signed. The Chinese player played on a two way contract for Shanghai Dragons and for their academy team Team CC. He is considered one the best players in all of Chinese Contenders and can also hold his own against even the highest level Widowmakers in the Overwatch League proper. However, his skill set has a lot of cross over with other DPS players on Dragons and that redundancy ended up limiting his total playtime in the Overwatch League. He was the last remaining Chinese player on Shanghai’s roster, who have now completed their transition to an all Korean roster.

Diem, Luffy, and DDing all joined Dragons heading into the 2019 season. On the back of incredible performances by these three players, Shanghai was able to break its 0-40 cursed record from the inaugural season. Eventually, the newly renovated roster even secured the win at the Overwatch League 2019 Stage 3 Playoffs. During the 2020 season, these players took a backseat to new talent like Min-chul “IZaYaKI” Kim, Jae-won “LIP” Lee, and Byung-sun “Fleta” Kim.

[EN]
Luffy was vital in our #Breakthrough last year and has contributed greatly to our success this season. He's done everything we've asked of him and we couldn't be more proud of the player he has become. We will be following his career and wish him the best of luck! pic.twitter.com/s11lxuqiNf

[EN]
DDing's insane Sombra and Pharah plays were some of the highlights of our 2019 season. His skill and hero pool played a massive role in our #Breakthrough, and we will always be thankful to him. We hope he continues to fly the friendly skies in the future. pic.twitter.com/pI5gfnM5Ro

Diem, in particular, is a big loss for Shanghai. The player is widely considered to be one of the deadliest Widowmakers in all of Overwatch. Although Shanghai’s starting DPS Fleta won the 2020 MVP award, it was Diem who won the All Stars Widowmaker 1v1 event not once, but twice. Diem did earn some playtime this year and even got some in-match time alongside Fleta during the playoffs when their strategy called for a double sniper DPS line. However, a star player like Diem shouldn’t be spending most of the year relegated to the bench.

[EN]
Some of the most thrilling headshots OWL has ever seen have been the work of diem. After two years of being a Widowmaker champion, he's moving on from the Dragons. We wish him a bright future, thank you. pic.twitter.com/f46YK3Sdx6

On November 7th, starting Main Tank player Euiseok “Fearless” Lee announced that he was leaving Dragons to join Dallas Fuel. According to the team, they left it up to Fearless if he wanted to stay or leave. Fearless will be joining a plethora of other former Element Mystic players and former teammates on Fuel for the 2021 season, but he is a significant loss for Shanghai who relied on him throughout the year in the Main Tank role.

The roster cuts come at the conclusion of a fantastic year for Shanghai. Although they weren’t able to earn a spot in the season championship match, they did successfully win two regional titles in 2020 and ended the season with an incredible 27-2 record in the APAC region. In the APAC playoffs, they were able to earn their slot in the Grand Finals weekend with relative ease. However, the team didn’t thrive in the end of season playoff meta and were ultimately eliminated from the Grand Finals weekend by the surging Seoul Dynasty.

Going into next year there aren’t many changes that Shanghai needs to make to their lineup. Most of the players who departed on Monday were highly talented players who spent much of the season on the bench simply because the Dragon’s 2020 roster was packed full of world class talent. Hopefully those players will find new homes where they will receive more playtime.

We will update this document as Shanghai announces further postseason roster moves.