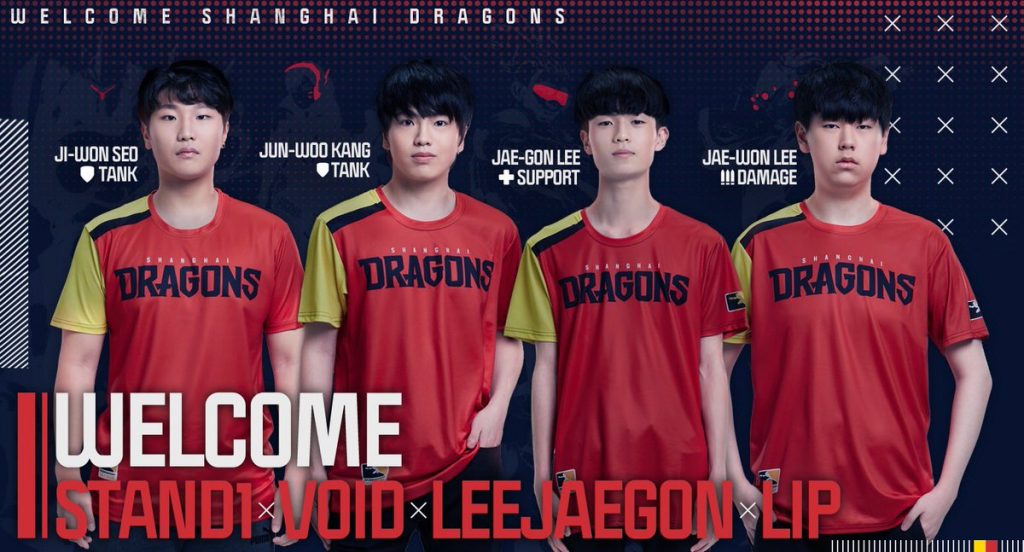 Stand1, Void, LeeJaeGon and LIP are the final additions to the 12-player roster (Image via Shanghai Dragons)

The Shanghai Dragons announced the final four players to complete their Overwatch team roster for the 2020 season.

Ji-won “Stand1” Seo, Jun-woo “Void” Kang, Jae-gon “LeeJaeGon” Lee and Jae-won “LIP” Lee are the final additions to the 12-player roster and are strong assets for the team and organization.

Void will bring league experience to the team as he played previously for the Los Angeles Gladiators. Before that, he also played for Team KongDoo Panthera, a major Korean Overwatch Contenders organization. DDing and Luffy also previously competed with TeamKongDoo Panthera.

LeeJaeGon is coming to the Shanghai Dragons from RunAway, a team in Overwatch Contenders Korea. RunAway’s complete roster was acquired by the Vancouver Titans in 2018 and was forced to create a new roster from scratch. LaeJaeGon was part of this new lineup and helped the team find success throughout 2019 that resulted in a first-place finish in Overwatch Contenders Season 2.

Stand1 is a tank main who most recently competed with Gladiators Legion, the Los Angeles Gladiators North American Contenders academy team. Before that, he competed with several teams such as NRG Esports, Foxes, and Team Envy.

LIP is a hit scan DPS specialist who is coming to the Shanghai Dragons from BlossoM, a Contenders Korea team. He also just recently became eligible to compete in the OWL, as his 18th birthday was on November 5.

Joining a new organization is exciting, and Stand1 recently tweeted his feelings about being one of the newest members on the competitive team:

“There are no words to express how happy I am to be joining OWL and the Shanghai Dragons. I will do my best to show great results. Thank you for your support and warm wishes.”

The final Shanghai Dragon lineup is a well-rounded team that has the potential to be a force to be reckoned with in the 2020 season.