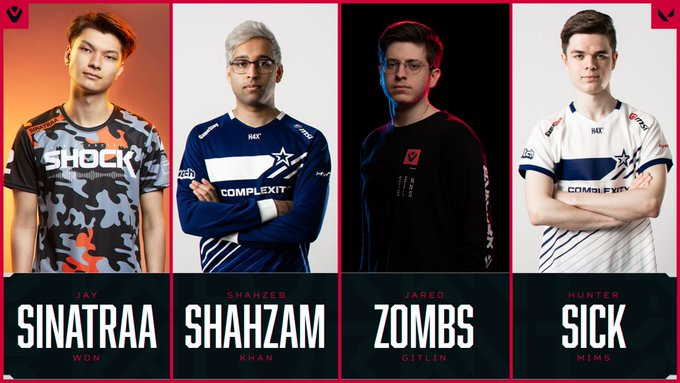 Time to write the next chapter.

We are excited to announce details about our Valorant team consisting of @sinatraa, @ShahZaMk, @zombs and @SicK_cs.

The Sentinels also added the two former CS:GO players Shahzeb “ShahZaM” Khan and Hunter “Sick” Mims to their VALORANT roster. Both players have competed in CS:GO at the highest level since 2014.

The fourth player to join the VALORANT roster is former Apex Legends professional Jared “Zombs” Gitlin, who has competed with the Sentinels since March of 2019. The search for the final member of their squad is still ongoing, according to the official press release.

VALORANT is the latest game from Riot Games. The game entered beta in early April and is set to release in Summer of 2020. For many pro players, VALORANT represents a fresh start and the opportunity to get in on the ground floor of a brand new esport.

“The move to Valorant is no doubt a huge step in my career, and I couldn’t be more excited about the opportunity,” Sinatraa said. “When I saw the team that Sentinels had put together, with so much experience from different esports, I knew that this was the right place to go and I’m excited to be at the front of it. To all my fans who have supported me over the years, the future feels really bright right now and I can’t wait to show everyone what I can do.”

The VALORANT esports scene is still in its early developing stages and many teams are starting to scout out the top talent from CS:GO, Apex Legends, Overwatch, and other competitive shooters to join their VALORANT teams. With this line up, the Sentinels have set themselves up to be top tier contenders in VALORANT.

“Our goals as an organization are to connect our fans to the biggest, most exciting games in esports, and to recruit championship caliber teams as we have in other games like Fortnite and Halo,” Explained Sentinels founder Rob Moore. “Signing on Sinatraa, ShaZaM, and SicK to join our organization further cements Sentinels as a home for world class players and teams.”

The next era of esports begins. pic.twitter.com/YXgbBiJNLv

As recruitment for VALORANT kicks into full gear over the next few months, many other players will be retiring from their current esport leagues to pursue a career in Riot’s latest competitive shooter. It will be very difficult, however, to capture another league MVP like the Sentinels did with Sinatraa.