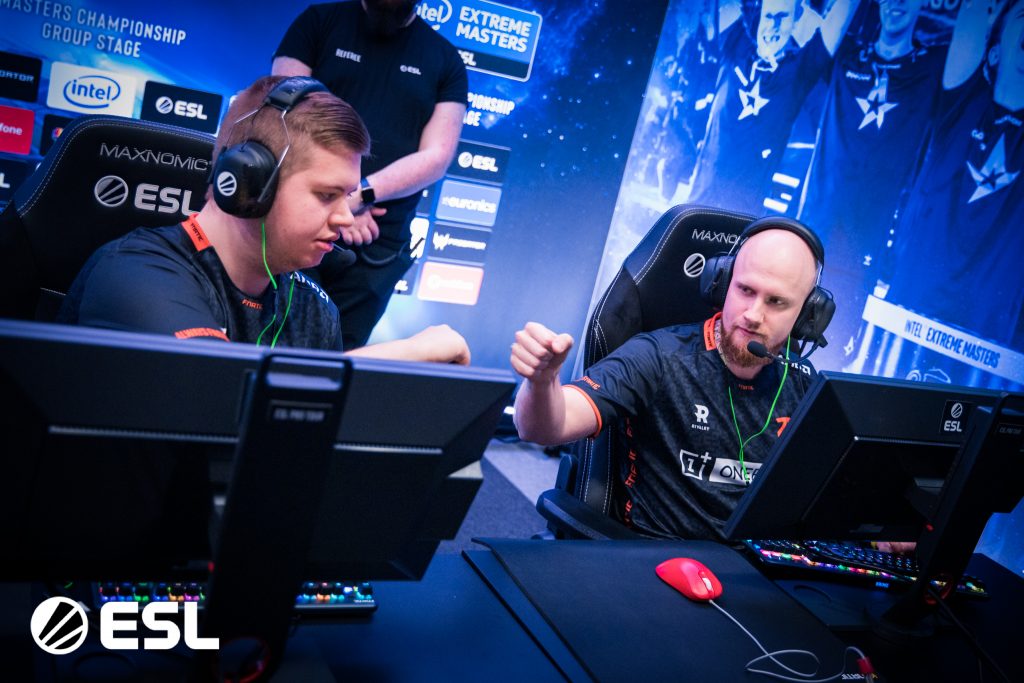 Fnatic have taken down 100 Thieves to secure a match against G2 Esports. (Photo courtesy ESL)

The IEM Katowice quarterfinals have concluded. Surrounded by an empty Spodek Arena, four teams competed for their tournament lives. The 100 Thieves train was unfortunately halted as Fnatic took them down in the closest 2-0 possible.

The first map of Inferno was chosen by 100 Thieves as they looked to continue their success. The pistol round went in their favor, but Fnatic stopped 100 Thieves in their tracks with an Arches to B force buy defense. In the first gun round with both economies on the line, Robin “flusha” Rönnquist got an ace retaking the B bombsite to propel Fnatic into the lead. The Swedes went up 7-2 before 100T finally made pushes work on the A site. The remaining rounds were split, the half ending 10-5 for Fnatic.

The lead would stay with Fnatic as their T side earned man advantages frequently. All of Fnatic’s players were performing as they earned match point. All of the sudden, Justin “jks” Savage and Joakim “jkaem” Myrbostad came alive on the Banana defense. 100T won crucial gun rounds and held strong against Fnatic’s force buys. At 15-13, the Thieves shut down two Fnatic A pushes to force overtime.

The first round went Fnatic’s way on a B bombsite take, then 100T shut down Banana again to take the second. Freddy “KRIMZ” Johansson hit 30 frags as Fnatic took the lead before swapping sides. The Swedish defense held strong on the B bombsite as flusha and Maikil “Golden” Selim used a bait setup to deny a plant and win the map 19-16.

Now on Mirage, Fnatic took their T side pistol round. This time it was 100T’s turn to win the force buy. The Thieves took a 3-1 lead, but Fnatic quickly tied it with two A site hits. The score remained close until 100 Thieves hit their stride at the end of the half, taking a 9-6 lead. Sean “Gratisfaction” Kaiwai looked comfortable playing aggressively with the AWP.

100T’s momentum rolled on as they took the first two rounds. The Thieves were looking to run away with the game until Fnatic won a full eco round defending the A bombsite. The score gap closed as the teams tied at 12 rounds apiece. 100 Thieves won three rounds in a row to earn match point. Needing to win out, Fnatic defended the B site split with mediocre weapons to get to 14. A dominant round 30 saw the second map hit overtime as well.

Two consecutive A site executes split the first two rounds before Fnatic earned the lead going into their T half. Once again, Fnatic took two rounds in a row as KRIMZ completed the map two robbery (19-16) with a 1v3 clutch to send 100 Thieves home.

Map one saw Na’Vi choose Dust2. They won their T side pistol, but Liquid fired back with a force buy win courtesy of Jonathan “EliGE” Jablonowski in the Mid Doors. The A bombsite would be the focus of the early guns rounds. Down 4-2, Na’Vi tied up the game after an insane 1v4 from Oleksandr “s1mple” Kostyliev defending the bomb.

The momentum afforded Na’Vi to take control of the game. Their repeated assaults onto Liquid’s A site defense hit home every time. The half ended with Na’Vi up 10-5.

Liquid would close the gap by winning four of the first five rounds. Once Na’Vi had guns, their advantage would be regained. Multiple rounds were won for Na’Vi in Long as s1mple and Kirill “Boombl4” Mikhailov held the choke down. S1mple shut down a Mid to B split by jumping through smoke like a madman and 360 no-scoping Keith “NAF” Markovic to secure the 16-11 win for Na’Vi.

Liquid lost the pistol round on their Mirage pick, but then flawlessly stormed the B site by stacking two players with armor and rifles. They took three rounds before Na’Vi fired back with full buys. The CT side took the lead with successful defenses across both bombsites. Liquid did find some good entries, but Na’Vi was the better team in the clutch. The half ended 9-6 for Na’Vi.

The Liquid T side started strong by winning the first two rounds. However, the early gun rounds went the other way. Na’Vi streaked up to 12 rounds as their attacks consistently worked all over the map. The North Americans took one back with a hold on the B site, but Na’Vi went right back to it twice after and won both. Map point was reached for Na’Vi in round 24, but Liquid did hold valiantly. They needed six in a row for overtime and managed four before Egor “flamie” Vasilev closed out the map 16-13 for Na’Vi.

Only three matches of IEM Katowice remain as Saturday will host G2 vs Fnatic and Astralis vs Na’Vi. The last group B team left in G2 will hope to ride their hot streak as Fnatic hunt for their fourth IEM Katowice title. Astralis are looking to return to the top of the rankings and add another trophy to their case, while s1mple and Na’Vi continue strive for greater heights. The semifinals are sure to deliver as IEM Katowice is reaching its boiling point.