Secret at Full Strength and the “Stand-ins Pyjamas” 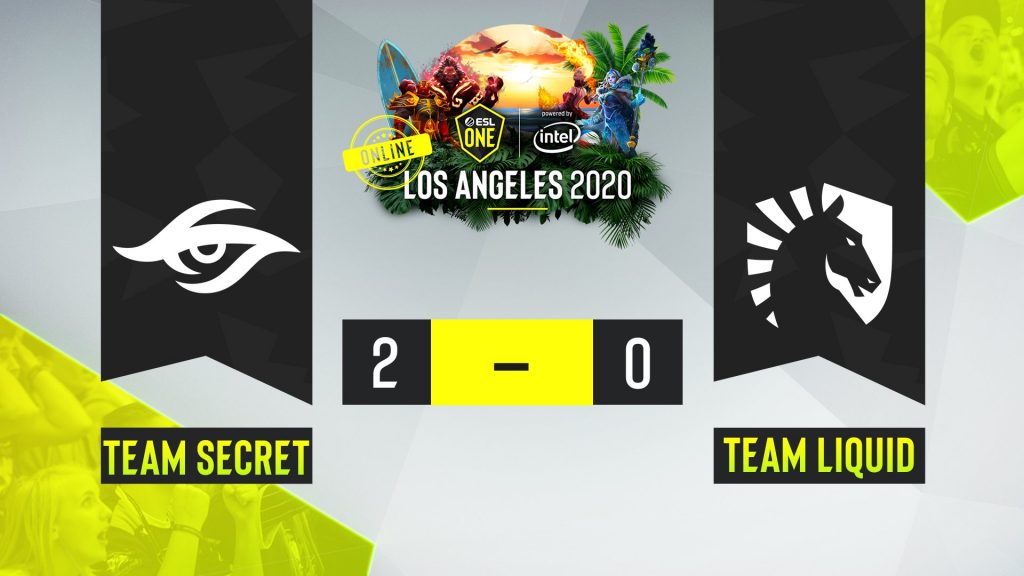 Day two of the European and CIS region for ESL One LA Online saw play begin for Group B. Teams including Ninjas in Pyjamas, Team Liquid and Team Secret all played their first series with several competitors sporting patched together lineups of standins. It was another exciting day of Dota so make sure to read part one of day two’s breakdown here.

Liquid Get Frozen by Secret

Both Team Secret and Team Liquid have managed to avoid any roster issues despite the travel restrictions affecting so many other teams. Liquid’s coach, Blitz, mentioned before the game that his team was feeling confident but wary of their chances against Team Secret. Game one showed us exactly why Secret deserve that respect as Puppey and crew put together a cleanly executed game plan with very few mistakes. YapzOr seemed to show up all over the map, causing immense havoc enroute to a 5/1/19 stat line on Earth Spirit. Meanwhile, MATUMBAMAN enjoyed nearly free farm on Morphling while Nisha, known for his own Morphling play, played the role of unkillable wall on mid Bristleback. Boxi, so often the foundation for success for Team Liquid, was entirely shut down and repeatedly fell at the beginning of fights. After a catastrophic attempt to contest Team Secret in the Roshan Pit, Liquid were forced to call it quits.

Game two was much of the same story for Team Secret, cleanly executing a well thought out gameplan to great results. Team Liquid switched up their tempo, opting to attempt an Anti-Mage draft with their final pick to counter Medusa. Team Secret had other ideas about who counters who and after a fairly even early game, Secret began to pull away at the 15 minute mark. With all three Secret core itemizing for raw damage in the mid game, the five man strength of their lineup bulldozed down all of Team Liquid’s outer towers. MiCKe found himself having to consistently cut creep waves to stall out the Secret advance but was eventually forced to fight into the teeth of Secret’s power peak. Anti-Mage is not known for being a great team fighter and the overwhelming damage output quickly cut through all of Liquid’s heroes as they attempted to hold high ground. Team Secret closed out the game at 34 minutes and do not seem to have lost a step during the quarantine.

In one of the most bizarre moves of the 2019/2020 DPC season, Alliance replaced their captain Fata and offlaner 33 after achieving very good results. The move sparked a lot of questions and with the return home of the TI winning S4, Alliance fans have looked on with great interest. Alliance have yet to replace Fata on their team and so expectations were quite low coming into the ESL One LA Online league. Just hours before the games would start it was announced that OG.Seed’s Xibbe would play the hard support for Alliance during the tournament.

Ninjas in Pyjamas are also going through some roster issues with both Universe and Lelis unable to play from home due to high ping. It was announced that Ramzes would take the spot of Lelis but he appears to have backed out just a few days before the event. Former Na’Vi offlaner Blizzy has stepped in for NiP completing the roster.

Game one was definitely not the way S4 envisioned his return to Alliance, even with tempered expectations. Standin Xibbe apparently was unable to play game one which left Alliance to call Lil into active duty and the lack of team chemistry was extremely apparent. S4 has taken on the captain’s role for his new team and drafted himself a bizzare last-pick Mirana which seemingly had no real synergy to work with. Alliance’s carry, Nikobaby, has been consistently given last pick heroes and tasked with carrying the game but found himself heavily countered this time around. After a disastrous laning stage, Alliance scored their first kill nearly 10 minutes into the game and would record only two more for the rest of the game. Blizzy looked fantastic in his debut for NiP and both mid laner, TANNER, and carry, Daxak, had completely uncontested games.

Game two showcased a bit more of the Alliance from earlier this season with a strong performance from Limmp and a last pick hard carry for Nikobaby. Xibbe also joined the team as a standin and enabled a much more comfortable role set up for the team as well. The teams traded blows throughout the early and mid games ended up almost completely even around the 30 minute mark. Even with the late game insurance policy of Nikobaby’s Spectre, Alliance struggled to close out the game and NiP nearly fought their way back into a winning position on several occasions. In the end, a strong performance from S4 on Axe as well as superior team fight allowed Alliance to outlast Ninjas in Pyjamas and even the series 1-1.

Game three appeared to vintage Alliance with Nikobaby off to an extremely fast start and complete free farm in the early stages. Limmp’s Kunkka and S4’s Beastmaster also looked to be on pace for a strong mid game power peak before Ninjas in Pyjamas could stabilize the momentum. Looking to tighten their grip on the game, Alliance attempted to take on Roshan before 20 minutes. Ninjas in Pyjamas charged into the river to contest and thanks to amazing spell casting from standins MiLAN and Blizzy were able to take the fight. The huge momentum shift caused by this full team wipe gave too much space to NiP’s superior late game team. Alliance fought on and found a key kill on Daxak’s Phantom Lancer but thanks to a timely buyback NiP turned the fight and claimed a second Aegis of the Immortal. With three very hard to kill cores, Ninjas in Pyjamas sieged high ground one final time. Against Mega Creeps Alliance continued to fight on but their window of opportunity had closed.