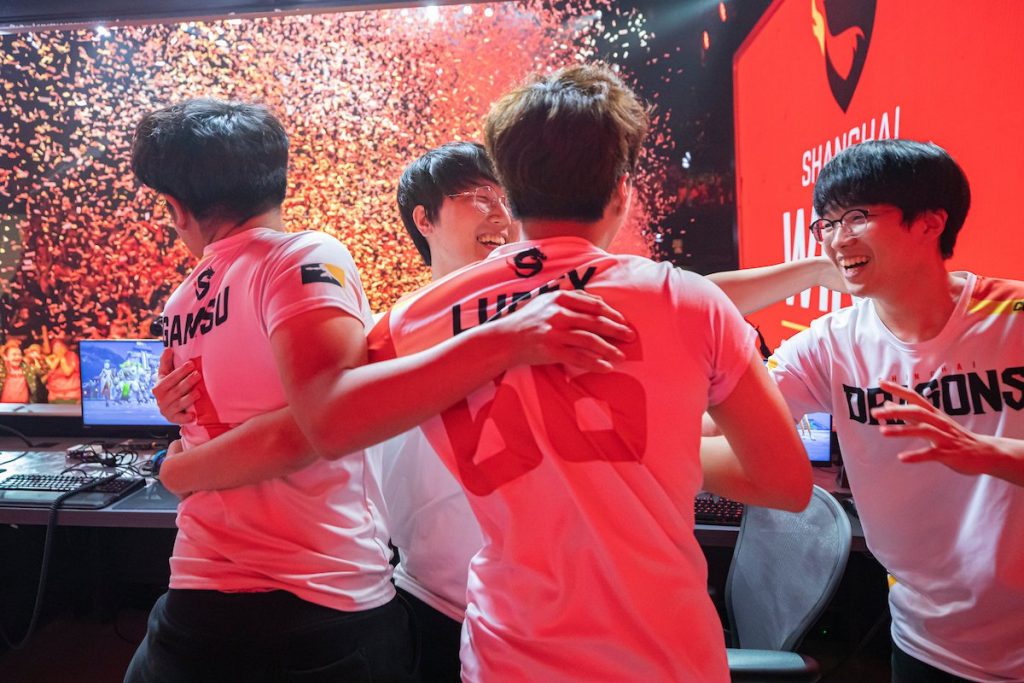 The Shanghai Dragons moved up the overall standings in Stage 3. (Image by Robert Paul for Blizzard Entertainment)

The Overwatch League Stage 3 playoffs are over, and it will be remembered as a Stage full of upsets. As if the Shanghai Dragons victory wasn’t shocking enough on its own, there were some new faces in the Stage playoffs, which has led to an interesting leaderboard heading into Stage 4. Let’s check out the Season Two OWL rankings ahead of Stage 4.

Despite their loss in the playoffs, Vancouver Titans are still the top team in the League. Throughout the season, Vancouver have proven their ability to dominate in any meta. They had one of the strongest GOATs compositions in the competition, especially once Sang-beom “Bumper” Park perfected his Reinhardt skills. Even with the 2-2-2 role lock, they are likely to be just as successful, with players such as Chunghee “Stitch” Lee and Hyojong “Haksal” Kim throwing out some powerful DPS plays.

New York Excelsior are (very narrowly) second on the leaderboard, with 19 wins and 2 losses. Not only are they hot on Vancouver’s heels already, but they also have an advantage with the introduction of the role lock, namely bringing back Park “Saebyeolbe” Jong-ryeol. Saebyeolbe is arguably one of the best DPS players in Overwatch League, and a fantastic leader and shot caller, but he struggled fitting in with GOATs. He’ll be in his element with the implementation of the 2-2-2 role lock, making NYXL a very real, potentially fatal threat to the Titans.

San Francisco Shock are the last of the top three teams. Many fans would count them lucky to even be there after their loss to Shanghai, but a strong team doesn’t usually stop being on top after one shocking loss. It is almost guaranteed that San Francisco will bounce back this Stage, as they have been a dominant team throughout this season, as well as throughout last season.

Los Angeles lost their playoffs spot to Stage champions Shanghai Dragons, and they’ve had a difficult season so far, but the Gladiators shine in DPS comps. Lane “Surefour” Roberts should especially benefit from the new role lock, as he has been struggling to find his place in a tank/support-centric meta, and his strengths lie in damage heroes.

With Stage 3 Playoffs over, teams are shifting their focus to the overall League standings. Where does your team rank? #OWL2019 pic.twitter.com/KfrkBulYnj

Places 6, 7, and 8, are practically piggy-backing each other. Each team – Seoul Dynasty, London Spitfire, and Shanghai Dragons – have 12 wins and 9 losses, with only the map differential (+17, +6, and +1 respectively) separating them. This will definitely be a collection of teams to watch in Stage 4, as just one map win (or loss) could shift the standings.

The Teams Trailing Behind

The bottom 5 currently consists of Paris Eternal at 16th, Boston Uprising in 17th place, Toronto Defiant as the 18th seeded team, Washington Justice at 19th, and Florida Mayhem in last place. Unfortunately, it isn’t looking likely that any of this will change in Stage 4. The only chance Paris Eternal have of moving up in the ranks is by pulling together and working on their communication, as their bond as a team (or lack thereof) has been their downfall up until now.

Both Boston Uprising and Toronto Defiant started out fairly strong this season, but their rosters are letting them down. If they had more time, this is something that they could easily work on and perhaps climb a few places on the leaderboard, but the end of the season is rapidly approaching, and their chances aren’t looking good.

Florida Mayhem are last place for a reason. Even if they had time to work on their roster and synergy, I’m still not convinced that it would make any difference. As a team, their games ense, sense of direction and ability to put together an adequate composition are severely lacking.

Throughout the rest of the leaderboard, there are some hidden threats. Namely, Seoul Dynasty, who sit at sixth, Shanghai Dragons, who sit at eighth and possibly even Los Angeles Valiant, who are 14th. Shanghai are a popular team, despite their record-setting 0-40 season last year, and their first Stage win has only empowered the lovable Chinese team. Their use of DPS heroes, especially Pharah and Widowmaker, is promising, and their performance in the previous Stage demonstrates that they’re on the rise. If they can keep it up, Stage 4 might be another happy championship for Dragons fans.

Seoul Dynasty were born for a 2-2-2 meta. Many Seoul players were previously on the Lunatic-Hai squad, with most of them in a DPS or Flex role. Seoul have proved themselves to be most powerful when they take advantage of the fact that they have very talented players with a specialty for each role. If they do this in Stage 4, they could climb back up the rankings.

Finally, Los Angeles Valiant have been improving slowly throughout the season. After a disappointing first Stage, an overhaul of their roster and lineup seems to have given the Valiant a new lease of life. They’re another team that also flourish in a DPS-centric composition, and their management (new and old alike) will definitely take full advantage of the strong Damage players in their roster.

If the leaderboard throughout Stage 3 is any indicator, Stage 4 is going to be full of surprises. The competition is heating up as we get closer to the season championship, and each team is going to be fighting for their lives, making for some intense gameplay. Most teams want to move up in the OWL rankings before the end of the season! Catch all the action on Twitch.

Overwatch
Share
Jess Simmonds
Jess has been playing video games and writing for publication all of her life. When not playing games or keeping up with esports, Jess is reading sci-fi books or writing short horror stories. She is also a huge Star Wars nerd whose life revolves around Overwatch.
Follow me