Santorin: “We should just play with no regrets, balls to the wall” 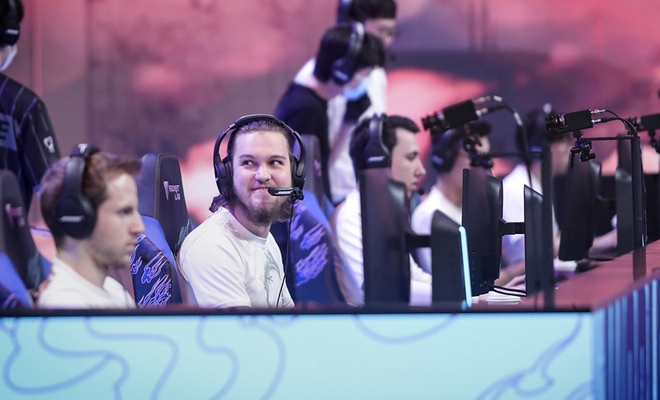 FlyQuest have their work cut out for them heading into the second round-robin, but Santorin remains optimistic about the team’s improvement. (Photo courtesy Riot Games)

FlyQuest slotted into Group C as huge underdogs trapped with tournament favorites TOP Esports and Korean second seed DRX. Despite concluding their first round-robin run with a 1-2 record with their only victory against Unicorns of Love, FLY showed they’re capable of pushing every team in this group to the edge.

Following their loss to DRX on day four of the Main Group Stage, we caught up with FLY jungler Lucas “Santorin” Larsen, who shared with us his takeaways from the teams first three games.

Hotspawn: Thanks for joining me after such a hard-fought loss. You said the other day that both TES and DRX both have the components to be incredible teams, but you held your own today. What do you take away from this loss?

Santorin: I think we played the early game really well, but after we hit mid-game it kinda fell apart. I feel like they’re a really good team and they definitely understand how to take a small lead and turn it into a bigger lead. When it came to vision control, where to pressure the map, it just felt like they were a better team at doing that. So moving forward we definitely have to focus on our mid-game and our macro because it definitely felt like it was a winnable game, but we just weren’t playing properly.

Hotspawn: Despite how things went down, is there something you can recall from that game that you were particularly proud of? It can be something a teammate did individually or something you guys did as a team,

Santorin: I would say just in general I was really happy that we were being really proactive in the early game and just fighting them. It definitely felt like we were making a lot of the good plays, but at some point we just fell too far behind and it became really hard to play the game out. But I would just say I’m really happy that we were playing aggressive in the early game.

Hotspawn: Shifting gears. It seems like no matter what FLY does, you’re always going to have doubters.

Hotspawn: Coming into Worlds, people wrote you off after drawing such a seemingly top-heavy group, but you’ve shown that you can compete with your own style. A lot of people will call this loss “acceptable” or even “good” for you guys because they didn’t expect much out of you to begin with. Obviously you came here to win, so how do comments like that affect you?

Santorin: Obviously people are gonna be surprised if we do well versus one of the top two teams in the tournament. I can definitely see us taking games off of any of these teams, and I feel great about the game against DRX today just because we were doing a lot of stuff in the early game and we were making a lot of proactive plays. Whereas in our first game against TES, we were just rolling over and not really doing anything. So I think we’re definitely feeling more comfortable on stage and coming into week two we’ll give them a run for their money.

Ggs DRX! Definitely a winable game – excited for the rematch later this week⚔️

Hotspawn: What would you say is a big improvement you’d like to see out of your team heading into the second round-robin?

Santorin: We should just play with no regrets, balls to the wall. Do anything you can to be aggressive in the early game and take it from there. These teams are really strong and if you give them an inch, they’ll take a mile, so we just have to match up to them in the early game.

Hotspawn: So normally I would be at the venue to get a feel for this myself, but we see a lot of the LPL teams showing camaraderie with their emotes and social media posts et cetera. Has the LCS come together like that to cheer each other on, talk about matchups, stuff like that?

Santorin: Yeah definitely. We’re in it together. All three NA teams are good friends with each other. I don’t know, I feel like we definitely work together. I talk a lot with someone like Mads “Broxah” Brock-Pedersen, for example. I love talking to him and I love helping out in any way that I can whether it be just cheering him up after a hard loss or something like that. We also went to the gym together [laughs]. We definitely have stuff that we do together as NA, but it’s definitely not like China where they’re on home soil and that definitely brings some momentum.

Hotspawn: It’s funny you said you were hanging out with Broxah. I was going to ask if you’d gotten a chance to look around, even just around the hotel, despite COVID-19.

Santorin: The only thing I’ve seen is from the bus ride [laughs].

Santorin: So I’m just watching through the window. I actually haven’t been out at all. Some of my teammates have. I think one time they went out and looked at a thing or two, but I haven’t really seen anything. It is a beautiful city though, just from watching from the bus ride you still kind of get some kind of perspective of how it is in Shanghai, but I’d like to see a couple more things [laughs].

Hotspawn: Is there something that you came here that you were hoping to see? Maybe a recommendation from someone or something you’ve been interested in for a while.

Santorin: Well just because of corona, I kind of knew that I was going to be very limited in what I could do. So I’ve just been focusing on the things I can improve on, which is mainly just gameplay and how we can perform better.

Hotspawn: Speaking of which, it really feels like FlyQuest has so much support internally from the org. Between Tricia Sugita being super vocal on Twitter and various members of the org joining together to livestream your solo queue matches, which I’ve been tuning into. Does knowing your org has your back and people are supporting you how they can motivate you guys?

Santorin: Yeah I really love what FlyQuest is doing. They’re really supportive and always trying to give us the best possible when it comes to everything like conditions or cheering us up after a hard loss and also just motivating us to do better. I’m really happy with how they’ve been doing stuff.

Hotspawn: Touching back on gameplay, Team Liquid picked up a win against G2 Esports, and TSM will have their shot at grabbing their first win later today. I’m not sure if you’ve seen any of their games at all, but what’s one thing you’d like to see them improve in order to start performing better in Group C?

Santorin: Honestly, I was watching– wait, I don’t know who they were playing, give me a sec [laughs].

Santorin: They were playing Nidalee Zilean or something like that. I just feel like they are picking a lot of comfort champions, which I understand, but they still have to pick combinations that work well together. I feel like playing stuff like Nidalee and Zilean is just going to be a hard time, especially at Worlds. I do think in NA that they could play that style and win, but now we’re at Worlds and you just have to adapt to the meta and adapt to what’s strong and understand that some of the things you might be doing in NA you simply can’t do at Worlds. Kind of the same as TL where they were playing Twitch and Rakan and got c ounterpicked by Leona and Draven. It’s a miserable time and sure, it doesn’t happen that much in NA, but it’s just something you have to be looking out for. I think if they fix that, I could still see them doing well at Worlds. 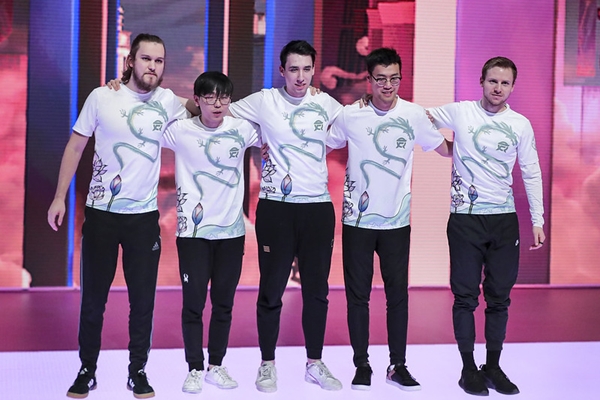 FlyQuest was the first North American team to pick up a win at the League of Legends 2020 World Championship after defeating Unicorns of Love on day three. (Photo courtesy Riot Games)

Hotspawn: Well two more questions for you, then. If you had to give an MVP award to one of your teammates at Worlds, who would you give it to?

Santorin: I have to choose someone? [Laughs] I’d have to give it to Tristan “PowerOfEvil” Schrage just because his Syndra performance was excellent; I feel like he was hard carrying that game. Sure, we set him up for success, but he really took it all the way home. So I feel like he was definitely a big part of why we wont against Unicorns of Love. When it comes to team environment, though, I feel like we’re all doing the best [we can]. Just being good friends, hanging out with each other. We’re still being critical and stuff like that, but always having a good mood and that’s something that I really like about my team.

Hotspawn: Well then lastly, do you have anything to say to FlyQuest fans that are watching you guys at Worlds for the first time?

Santorin: Yeah I mean, first of all, we’re at Worlds! It’s not something FlyQuest has done in the past so it’s definitely something that we’re really proud of. That being said, we’re still not proud of being 1-2. Obviously, we want to do better than we have, but we’re doing everything we can here and I’m happy you guys are cheering us on.

FlyQuest’s next game will be a rematch versus DRX on October 11th at approx. 4 a.m. PT.