Royal Never Give Up Announce Departure of Karsa 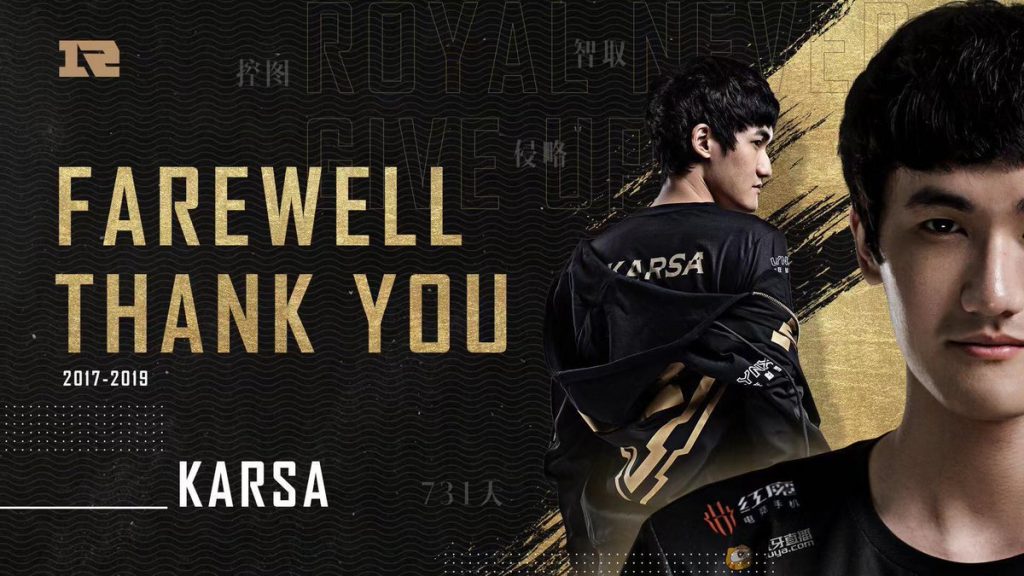 The Royal Never Give Up organization announced the departure of jungler Hung “Karsa” Hau-Hsuan before the coming 2020 season.

Today we announce the departure of our jungler Karsa. With you we celebrated an MSI championship, two #LPL Split titles and two Worlds appearances.

You will always be part of the Royal family! We wish you all the best, thank you for all the memories Karsa! pic.twitter.com/hLtP7KuggO

“You will always be part of the Royal Family! We wish you all the best, thank you for all the memories Karsa!”

Karsa joined RNG in 2018 after proving himself in the Taiwan LMS league. During his three years in the domestic league, Karsa and the Flash Wolves dominated the competition and were able to bring home four titles. His performance showed he was an effective player who could compete at a higher level, which resulted in him moving up to the LPL.

During his first year with RNG, Karsa and the team found success by winning both the spring and summer LPL seasons but unfortunately could not bring home the 2018 World title.

In 2019, RNG faced rigid competition and as a result, fell behind in the league standings but were still able to advance to Worlds. They, unfortunately, did not make the quarter-finals and were eliminated by the European team Fnatic.

Throughout these hardships and setbacks Karsa remained an effective jungler and will be a sought-after free agent. The competitive scene will now wait anxiously to see where Karsa will take his talents, and who will replace him on Royal Never Give Up’s roster.