RNG Remain Undefeated, VG and LGD In Trouble At ESL One 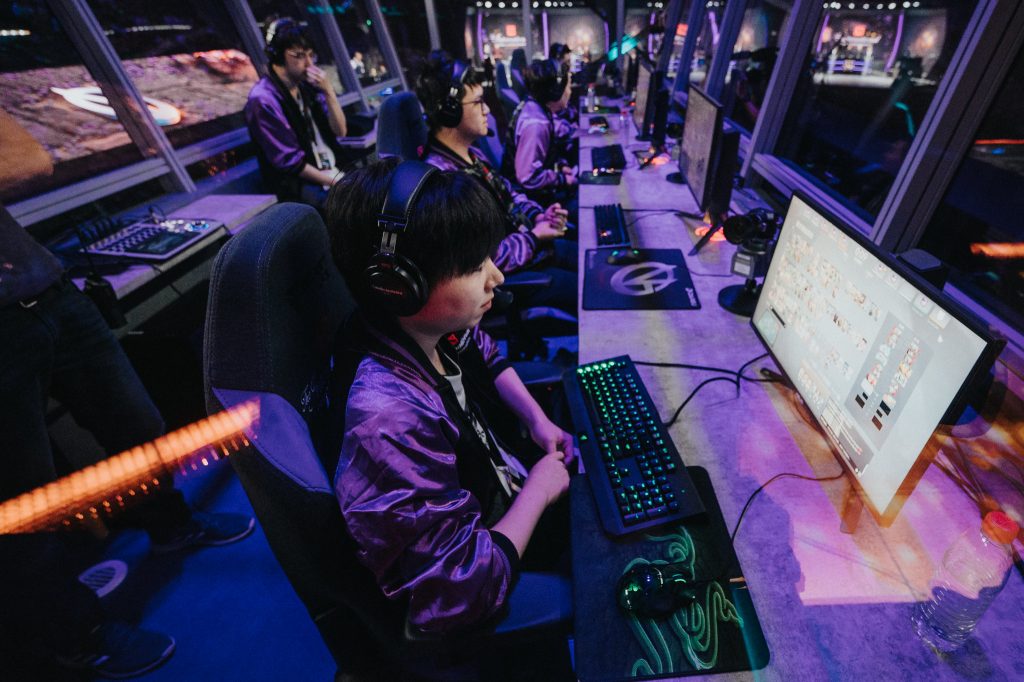 ViCi Gaming are in danger of dropping out earlier than expected. (Photo courtesy Valve)

We are now more than halfway through the Chinese group stage at ESL One Los Angeles, with the standings starting to solidify and with playoff contention now in sight. Monday’s docket was a quadruple-header, presumably implemented by ESL in order to make room for the other online tournaments being held in China simultaneously.

Kings of the Scene

In spite of their front-loaded schedule, Royal Never Give Up maintained their poise and composure—coming out of their games still undefeated in terms of match scores. Having to play six whole games in a single day could not have been easy for them at all, but the fact that they were able to close out both of their matches proves just how well-prepared they are for this competition.

Game 1 of their series versus EHOME started off extremely well, with every single player on the team working in harmony to lock down the lanes from the get-go. Repeated kills on Liu “Sylar” Jiajun’s Juggernaut in the safe lane greatly set back his farm—and the same could be said about Cheng “NothingToSay” Jin Xiang’s time as Templar Assassin in the middle lane. Gao “Setsu” Zhenxiong really put the hurt on NothingToSay in the lane, causing the TA player to go 1-5 and have less than 500 GPM to his name.

The game was practically done by the 15 minute mark, with RNG holding a gold lead worth 6,500. Not even ten minutes later, EHOME was forced to admit defeat.

They were able to throw a counterpunch in the second game, however. Spurred on by the bitter loss in the previous game, Sylar and NothingToSay both redeemed themselves—with the former now playing Lycan. Both players won their lanes handily, steamrolling RNG with the lockdown provided by their supports. With their 13,000 gold advantage 20 minutes in, the rest was a walk in the park for EHOME.

Sadly, the power of RNG was too much for them to handle in the third game. Monet’s incredible Diffusal Blade timing (11 minutes!) on Phantom Lancer allowed them to immediately push the tempo against EHOME’s Medusa-based draft, ending the game in 23 minutes before the late game carry could even buy any items aside from Manta Style. With their gameplan in shambles, EHOME simply had to tap out.

RNG continued their success against PSG.LGD Gaming later in the day, in another three-game series that was a clear show of force by the league leaders.

The first game was an utter shellacking of LGD. Every single player on RNG just turned up the heat in the early game, holding LGD to just two kills while scoring 15 of their own. It was ugly to say the least, and LGD were forced to concede before the 15 minute mark had even passed. Frightening.

What they went through in the first game seemed to wake LGD up in the second, however. Lu “Somnus丶M” Yao exploded on Templar Assassin, shredding through RNG’s lineup with relative ease. Not even the presence of Su “Flywin” Lei’s Pugna could save all of RNG from the sheer physical damage output of Templar Assassin, and so they called gg after just 28 minutes.

A very long teamfight with @LGDGaming coming out on top! #ESLOne

But RNG would not be denied after all. In a near-repeat of the first game, they took control of the lanes right away in the third, with the most impressive feat being Setsu’s lane domination as Shadow Fiend over Somnus丶M’s Templar Assassin. Shadow Fiend is supposed to have a bad matchup versus Templar Assassin, but spamming Enchanted Mangoes and getting help from his supports in the form of early rotations allowed him to rule the middle lane.

And with Monet happily slaying his opponents in the safe lane as Dragon Knight, the game belonged to RNG before too long. LGD could do nothing to stop the deathball that was coming their way, and so they surrendered the series in 25 minutes.

Along with their undefeated streak, these results mean that RNG get to keep their top spot in the standings. Should everything go as planned for them over the rest of the group stage, they will surely find themselves sitting comfortably in the winners’ bracket.

LGD are also looking a little bit shaky still. They’re holding on to fourth place in the standings, but have a negative record in maps right now. Their troubles continue as the tournament goes on; can they still find their rhythm before it’s too late?

Although EHOME could not put RNG away, they certainly made up for lost time by throwing two haymakers at Invictus Gaming right after. Collectively speaking, the entire series lasted less than 50 minutes, which paints a horrifying picture of just how lost iG seem to be in this tournament.

It doesn't get any more clutch than this egg from Kaka! @invgaming takes the lead after a beautiful teamfight against @EHOMECN #ESLOne

The first game was quite mind-boggling in the sense that iG should not have lost given their draft and how they won every single lane. They even had Ancient Apparition, Phoenix, Invoker, and Faceless Void—all of which are counters to EHOME’s Death Prophet and Wraith King-based lineup. Yet somehow, even with Sylar’s delayed Radiance timing, they managed to throw the game away.

What they did wrong in the first game definitely shook them up in the second, which they lost in just 15 and a half minutes. Not a single player on iG looked like they knew what hit them. Sadly, there isn’t much else to say about their match, other than the fact that iG will more than likely be the first team to be eliminated from the tournament at this rate.

Newbees on the Block

Meanwhile, Newbee seem to be ramping up the intensity on their end, taking down ViCi Gaming two games to none. Again, it’s never easy doing this to VG, who have been the strongest team in China for quite a while now. But we’ll get back to that point later.

Game 1 saw Newbee exert their will in the laning stage without breaking a sweat. Every lane went in their favor, and they leveraged the early advantage as if they were a hardened team made up completely of veterans by mowing down objectives left and right. After all, this was their objective given that they had picked Lycan for Xu “Moogy” Han and Templar Assassin for Yin “Aq” Rui.

"Me Lycan, me hit rax" – @newbeecn took down @VICI 's midlane with insane speed and disappeared just as fast.

And although VG traded blows with them somewhat, the runaway train that was Newbee was much too strong and much too fast. They could scarcely defend their towers and barracks from the onslaught, and called game after 32 minutes.

Newbee certainly didn’t want to leave the rest of the series to chance, once again destroying VG in the second game. Aq exploded on Morphling for 19 kills, carrying the entire team on his back all game long. An Ethereal Blade at 14 minutes tells you all you need to know; he was popping VG’s heroes like nobody’s business the whole time.

AQ is having a field day with his Morphling to help @newbeecn stay ahead against @VICI ! #ESLOne

With no answers to the immense magical damage coming from Aq’s Morphling, VG was forced to give up the game and the match. Having no true late game carry definitely hurt them in this regard, as Zhang “Eurus” Chengjun could not go toe to toe with Aq considering that he was playing Lifestealer.

This is a fantastic outcome for Newbee, who now hold second place in the standings and have a solid shot at making the winners’ bracket. The result surely increases their morale and lifts their spirits after losing to EHOME on the first day, and their rivals should look out for them now.

VG, on the other hand, don’t look like the Dota Pro Circuit second placers that they should look like right now. Although this event won’t award any Pro Circuit points, they still have their pride and the prize money to worry about. Could they turn their misfortunes from the past two days into a lower bracket appearance at the very least?

The competition continues to heat up in China for ESL One Los Angeles. Catch the rest of the games on the official ESL Dota 2 Twitch channel, and stay tuned to Hotspawn for the latest coverage of the event!