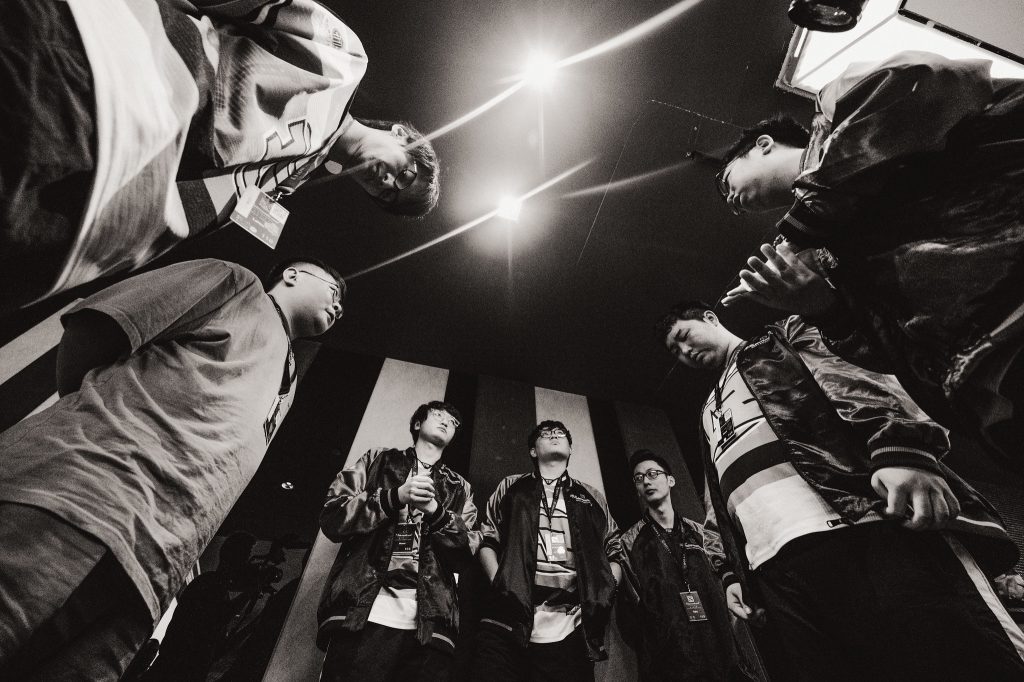 RNG displayed nothing but confidence and skill in the grand finals against Newbee. (Photo courtesy Valve)

The royals have taken their rightful place on the throne. On Sunday, Royal Never Give Up claimed the trophy at ESL One Los Angeles, cementing themselves as one of the strongest teams in China right now.

After securing a spot in the upper bracket last Thursday, RNG defeated Newbee (who came all the way from the first round of the lower bracket) to claim the gold in the grand finals. They did so almost without breaking a sweat, dropping just one map to the challengers who had been steadily gaining momentum over the course of the tournament.

Before making it to the grand finals, though, Newbee first had to go through EHOME—who had been put into the lower bracket by RNG last Thursday. Given that EHOME also beat Newbee on the first day of the event, it was clear that this matchup was not going to be a walk in the park for Newbee.

Indeed, the first game did go the way of EHOME. Despite the stellar performance by Xu “Moogy” Han as Nature’s Prophet, it was the combined strength of Liu “Sylar” Jiajun as Anti-Mage and Cheng “NothingToSay” Jin Xiang as Kunkka that prevented the rest of Newbee from getting a good start.

That was one beefy Bristleback … but great coordination from @newbeecn to take him down without any casualties! #ESLOne

The Bristleback of International 6 champion Zhang “Faith_bian” Ruida was no slouch either, serving EHOME as the indomitable tank for their draft. It took Newbee plenty of effort and resources just to bring him down—and even then, they only managed to do so twice during the whole game.

But of course, with the rest of Newbee limping from the poor laning stage, it was only a matter of time until EHOME’s primary cores finished them off. The blistering farming pace of both Sylar and NothingToSay made sure that Newbee simply could not catch up, and so they were able to close game one in just under 40 minutes of play.

But it took Newbee no time to get right back into the series in game two, blitzing their rivals in a quick victory backed by a last pick Alchemist. The cheesy strategy worked out beautifully for them, as Yin “Aq” Rui played the hero flawlessly. Using the rather passive matchup against NothingToSay’s Dragon Knight to his advantage, Aq farmed to his heart’s content, eventually getting up to 1,100 gold per minute as fueled by his blazing fast 14 minute Radiance timing.

Chaos in the pit with @newbeecn coming out on top! #ESLOne

With the rest of his items each coming in just three minutes apart, it was clear that EHOME’s timer was quickly running short. Losses in skirmishes throughout the early and mid game set them back significantly, ensuring that they were unable to mount a defense against Newbee’s deadly Alchemist timing. Moreover, a devastating teamfight loss for them at the Roshan pit made things even more difficult.

Having no answers to Aq’s Alchemist, EHOME tapped out before half an hour had even passed.

The third game was when Moogy decided that he had had enough. After settling into his groove as the safe lane Magnus, Newbee’s mid laner hit several huge Reverse Polarity initiations throughout the game, which was crucial to the success of their teamfight-focused draft.

What a RP from @Moogy_xh – he turned the fight around for @Newbeecn in just a second! #ESLOne

The rest of his team definitely appreciated the area of effect disable that Moogy so graciously provided them with. Aq dished out huge amounts of splash damage as Dragon Knight, Wen “Wizard” Lipeng held their opponents in place for longer as Mars, and so did Yan “Waixi” Chao as Puck. Of course, Zeng “Faith” Hongda took advantage of this as well, wrecking EHOME with his Chain Frosts as Lich.

Another game-winning RP coming out from @moogy_xh to help @newbeecn secure the win – this man is unstoppable today! #ESLOne pic.twitter.com/CqQ66SuRn0

Although EHOME held a sizable net worth lead in the first 30 minutes of the game, their advantage simply evaporated after a massive five for nothing teamfight win by Newbee in the waning minutes of the contest. Left with no buybacks save the one on NothingToSay’s Morphling, EHOME was forced to surrender the lower bracket match along with their shot at the grand finals.

What Are Knights to Kings?

Alas, the dream lower bracket run Newbee had hoped for did not materialize in the end. They were taken behind the woodshed by RNG, who started off the grand final series auspiciously in the first game.

Game one served as an immediate message to Newbee as the challengers to RNG’s throne. Picking Dragon Knight for Du “Monet” Peng and Storm Spirit for Gao “Setsu” Zhenxiong, the undefeated squad immediately exerted their will right out of the gates. Setsu’s snowball start gave way to comfortable teamfight wins for RNG, allowing them to pick up kill after kill and extend their advantage to unreachable heights.

What a timely Carapace from September to help @rngroyal finish off @newbeecn in the first game! #ESLOne pic.twitter.com/mJ3JoDuB7B

It wasn’t long before Newbee lost their middle tier three tower and barracks, which prompted a quick surrender.

RNG kept their momentum and rhythm up in the second game, though both teams played a more even contest this time around. Setsu’s signature Puck was an oppressive force early on, terrorizing Newbee wherever he went. Monet’s Faceless Void followed suit, using Chronosphere to his team’s advantage in early skirmishes.

Newbee did, however, shrug the early game losses off in the mid game, utilizing the power spikes of Moogy’s Lycan and Aq’s Storm Spirit to great effect. For about 15 minutes, they actually held a decent net worth advantage, and for a while it looked like the match would be a lot more interesting than what the first game might have implied.

Setsu with his Puck jumping around the map is too much for @newbeecn to handle! #ESLOne pic.twitter.com/cPkI8LdTgM

Sadly, they could not maintain the advantage going into the late game. With both Setsu and Monet farming in peace, the initial setbacks they had suffered early on came back to haunt them; Moogy simply could not go toe-to-toe with RNG’s cores by virtue of him playing such a mid game-focused carry. Setsu in particular played the Puck game of his life, constantly repositioning and getting on top of Newbee’s heroes without a care in the world.

Unable to respond, Newbee tapped out in Game 2—backed into a corner by such strong opposition.

Game 3 saw Newbee dip into their bag of cheese once again as they did versus EHOME earlier in the day. Aq was able to get his hands on Alchemist a second time, which worked wonders in such a desperate situation for his team. Left totally unchecked by RNG, Aq was able to buy a Battle Fury in just ten minutes, which then led to even more gold as Newbee turned up the heat and played at a breakneck pace.

Everyone was so low, but @rngroyal only got away with a support Clock kill, while @newbeecn won a big teamfight! #ESLOne

The dazzling performance of their captain Faith should not be overlooked in this game, as his Clockwerk served as a truly disruptive force. RNG found it difficult to get in proper position during teamfights, giving Newbee the advantage in the scrappy engagements. Stretching their net worth lead to unfathomable levels, Newbee took the third game after just 31 and a half minutes.

Nevertheless, it was RNG who came away with the victory after all. Drafting Lifestealer in response to Newbee’s first two picks in Centaur Warrunner (which surprisingly was placed in the hands of Aq as their mid lane hero) and Clockwerk, they were able to punish Newbee’s unorthodox strategy extremely well.

As he is often wont to do, Setsu took advantage of the easy lane to snowball right out of Newbee’s control as Templar Assassin. A ten minute Blink Dagger followed by a 14 minute Desolator timing allowed him to immediately start tearing Newbee’s heroes to pieces, and it wasn’t long before the game was out of the challengers’ reach.

Monet used this time to farm away as Lifestealer, furthering his team’s enormous lead to secure the victory and the championship title before the 30 minute mark.

This result is a huge boon for Royal Never Give Up, even in spite of the fact that ESL One Los Angeles will no longer award any Dota Pro Circuit points. This is their chance to rise through the ranks in China, and prepare themselves for other events that might be turned into online competitions given the COVID-19 pandemic.

Either way, it’s clear that RNG are quickly gaining momentum in the region, and will likely grow to become a huge threat to other Chinese teams in the near future.