Rivalry to Hold No Major No Problem Online Tournament 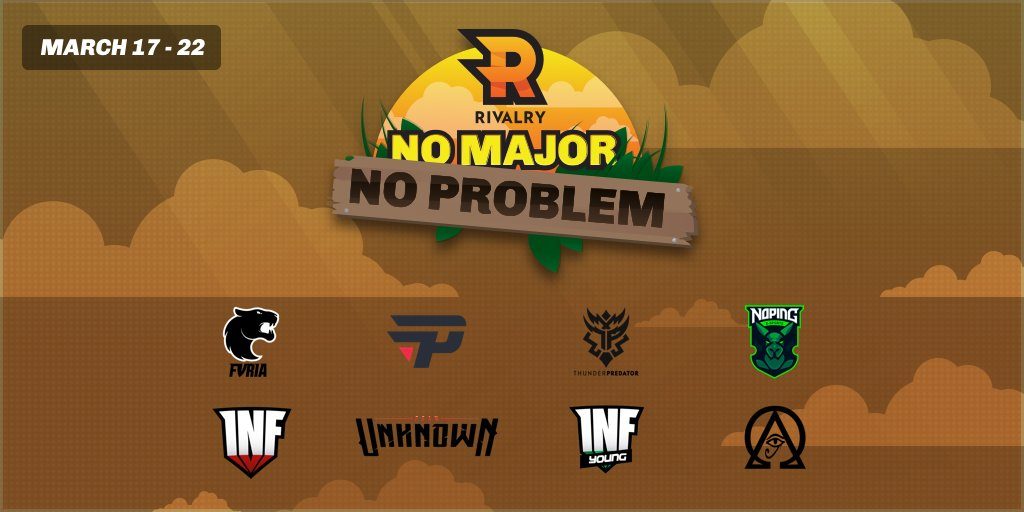 Rivalry's No Major No Problem is a direct response to the cancellation of the Los Angeles Major. (Photo courtesy Rivalry)

The long Dota drought amid a host of coronavirus related cancellations seems well and truly filled, as Rivalry and 4D Esports announce No Major No Problem. Revealed in a post on Monday evening, the event features eight of South America’s best Dota stacks competing for a share of $5,000.

Major cancellation got you down?

Well, no major… NO PROBLEM!

Announcing the Rivalry No Major No Problem, featuring the best teams from South America duking it out over the next 6 days for their share of $5,000!

The impromptu online tournament is set to run from March 17th until March 22nd. Organized in a format familiar to anyone who’s watched a Dota Pro Circuit Minor, No Major No Problem features two GSL-style groups of four teams playing in a round-robin series of best-of-three matches. The top two teams from each group will then advance to a double-elimination playoff.

Despite its out-of-the-blue timing, No Major No Problem features almost every top name in SA Dota. Alongside the likes of stalwarts Infamous, FURIA Esports, and paiN Gaming, are Minor attendee NoPing e-sports and Thunder Predator, who qualified for the ESL One Los Angeles Major before its cancellation. They’re joined by Infamous Young, Team Unknown, and Omega Gaming to round out the eight-team lineup.

Esports betting company Rivalry has contributed to multiple Dota 2 events in the past, and organizer 4D Esports are frequently responsible for various South American restreams of DPC events. The company most recently provided the Spanish language restream of DOTA Summit 12 on their official Facebook page.

Together with WeSave! Charity Play, No Major No Problem represents the Dota 2 community’s rapid response to a severe lack of Dota in the wake of the global Coronavirus pandemic. This South American focused tournament will help fill the void left by the postponement of multiple DPC events.

No official stream has currently been announced for the online event. However, the best places to check out Rivalry’s content is on their official Twitch channel, while 4D Esports frequently broadcasts on their Facebook page.