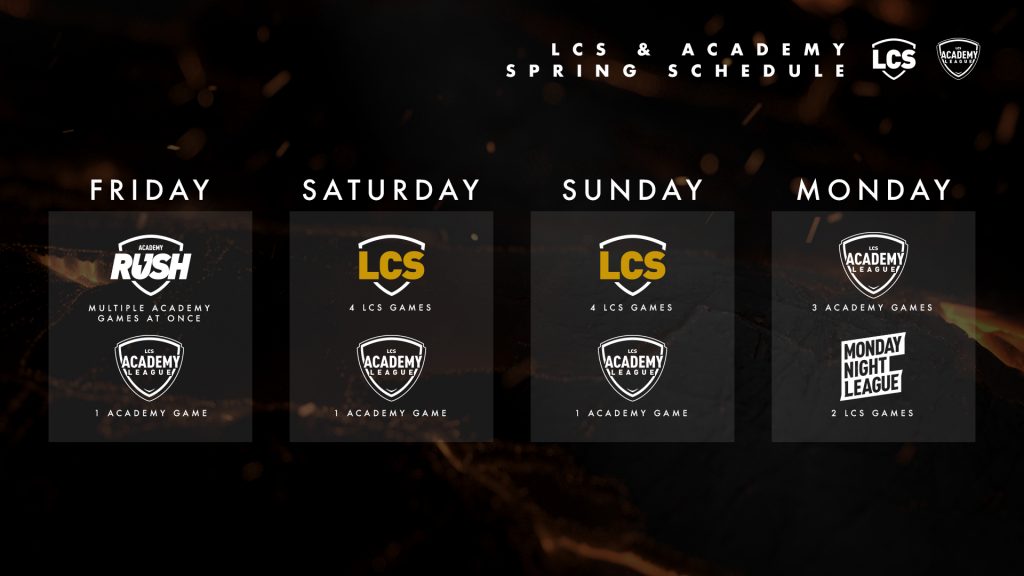 LCS and LCS Academy will expand to a four day format with multiple games played each day. (Photo courtesy of Riot Games)

Riot Games announced Wednesday changes to the North America League Championship Series (LCS) schedule and format to take effect at the beginning of the upcoming Spring Split in two weeks.  The region will see additions to its weekly scheduling, playoff format, and Worlds qualification. Furthermore, the Academy League will feature LAN and online matches along with general scheduling changes.

The LCS will see the most changes with its return on January 25th as it moves to a three-day week with four games played on Saturday and Sunday. Two more games will be played Monday, a feature dubbed “Monday Night League”. Monday Night League will feature the two biggest scheduled games of the week every Monday at 5:30 p.m. PT.

The seasonal playoff format will change dramatically for the 2020 season. The LCS will now have a four-week-long playoff period with exclusive best-of-five series’ for every team participating and the addition of a lower bracket.

The playoffs will work with seed one taking on seed four on one side of the bracket and seed two and three facing off in the other. The winners of each series advance into the semi-finals, with the losers facing against the fifth and sixth seed. From there, the grand final will be determined by the two teams who qualified through the upper and lower bracket.

Additionally, the Spring playoffs will determine which North American team qualifies for the Mid Season Invitational (MSI), while the top three teams in the Summer Split playoffs will qualify for Worlds 2020. 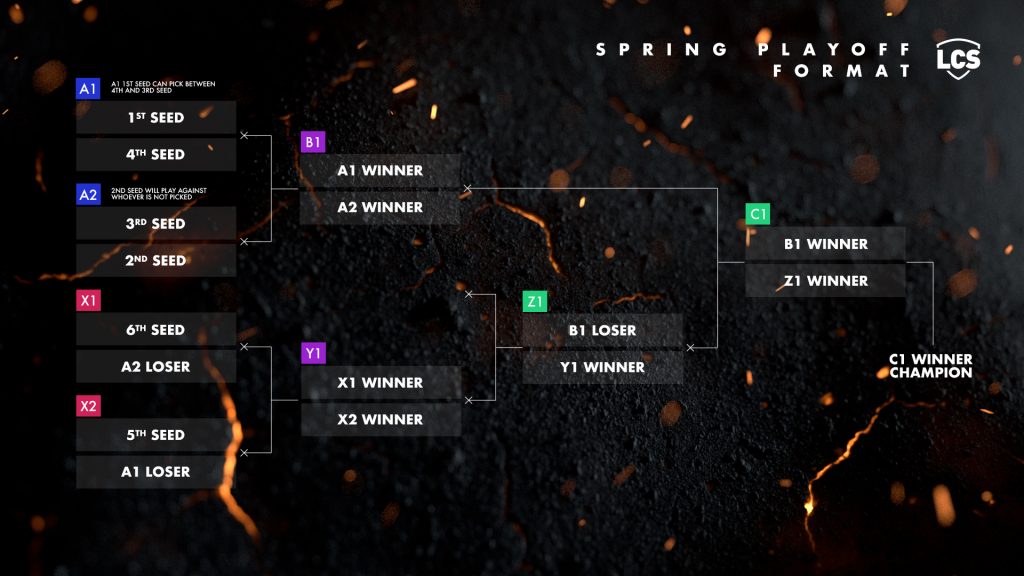 Changes to the LCS Playoff format will commence this season during the Spring Split. (Courtesy Riot Games)

LCS Academy will be joining the LCS on Saturday and Sunday as two teams will play on the main stage with broadcasts also featured on the main lolesports channels. In addition, three LCS Academy games will take place during Monday Night League in the main studio as well.

Fridays will debut Academy Rush, where four Academy matches will play simultaneously, with one scheduled for live broadcast after gameplay. These games will be played remotely with analysts and casters jumping between live sessions.

The LCS Academy will also see changes to their playoff bracket as well. The top two seeds from the LCS Academy will receive byes into the semi-finals, and the quarter-finals will see seed three and six and seed four and five face off. From there, the first seed team gets to select which advancing quarter-finalists they wish to play. The second seed team will then take the other. Moving on, the grand final will be determined by the advancing teams from the semi-finals.

The LCS Academy will get started on January 24th, with LCS beginning on January 25th. LCS Spring Playoffs will be held March 28th – April 19th and Academy Playoffs March 26th – April 10th. For a full schedule of the Spring Split season, head over to the official announcement for a complete list of games!