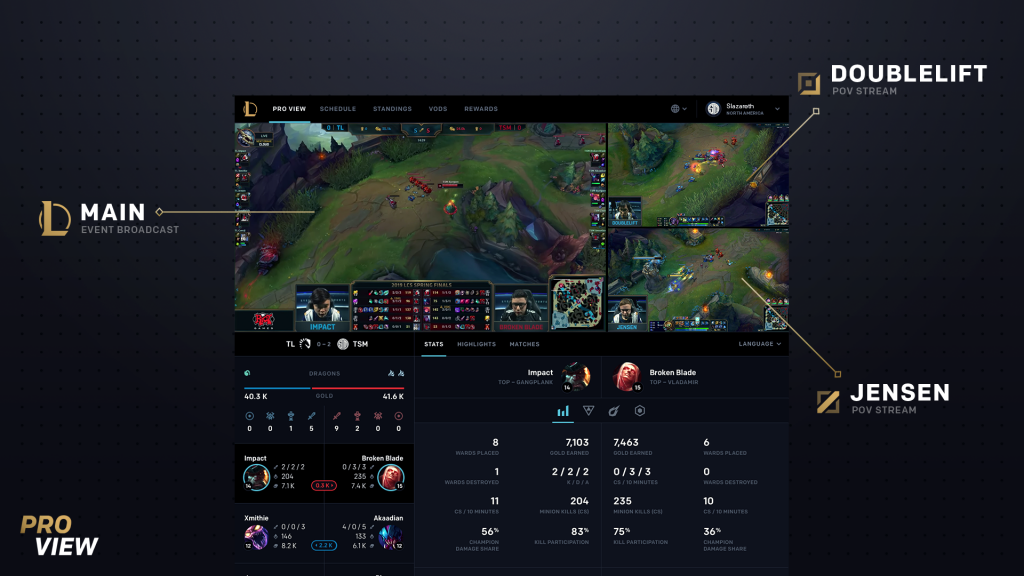 Riot Games has announced Pro View, a new POV streaming product which will debut for the Summer Split.

Available for purchase through watch.lolesports.com, Pro View will allow users the ability to spectate individual players throughout LCS and LEC matches.

In addition to POV, Pro View will include the following features:

“Watch.LoLEsports.com & Pro View represent our commitment to growing the viewing experience of our sport into a deeper and more engaging experience,” Luke Cudney, Esports Digital Product Manager, said in a release. “It is critical that as our sport grows, teams and players around the world share in our success.”

Pro View is currently available for two leagues, the LCS & the LEC, and will come in two different levels, Regional Access & All Access. The Summer Split will cost $14.99 (LCS) or €14.99 (LEC) and $19.99 for All Access. Proceeds from Pro View will go directly towards supporting teams in the LEC and LCS, as well as regional leagues to continue growing LoL Esports.

Riot Games has confirmed that they are actively working on setting up Pro View for more leagues and exploring adding additional languages.

A confirmed release date for Pro View has yet to be announced, however, with the LCS split starting June 1st and LEC June 7th, we can expect confirmation very soon.

This is not the first time a company has introduced an esports POV platform. In 2018, The Overwatch League announced The Overwatch All Access Pass. The $14.99 pass allows viewers access to a command center where they can watch POV of a selected player. Viewers can watch preset template views that combine player POV, overhead map, and the main broadcast. 2019 pass holders also received 200 Overwatch League tokens, 20% merch discount, ad-free Twitch viewing and more.