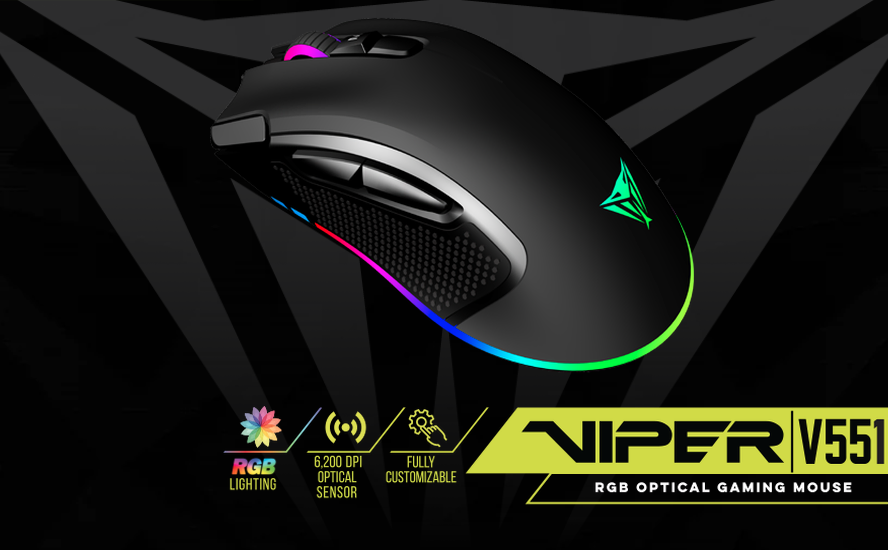 With high expectations and high reviews, we tested out the Viper Gaming Mouse V551 to see if it can really withstand our expectations.

Viper Gaming recently announced the arrival of two new gaming mouses to their comprehensive lineup of gaming paraphernalia  – the V550 and the V551. With a focus on inclusivity and a penchant for performance, Viper Gaming has created a gaming mouse that they believe gives gamers the best agility and accuracy in all gaming situations.

We got to try out the new V551 gaming mouse which features a more prominent right-hand configuration, an adjustable DPI of 6,200, and customizable RGB illumination. With high expectations and high reviews, it’s time to test out the mouse and see if it can really withstand this gamer’s expectations.

I chose the V551 because I am right-handed but Viper Gaming also developed a more ambidextrous model in the V550. The mouse itself isn’t too large but it is considerably bigger than my current mouse. I thought I would struggle with the design of the mouse going from a claw grip to a palm grip mouse but I haven’t had much of an issue.

The mouse fits the hand well, there’s little resistance to move the mouse, and the buttons are placed in optimal positions where I’m not struggling to hit them. Viper did think about the design and dimensions of the mouse because it really isn’t as large as other gaming mouses I’ve tried to ensure it’s more accessible to all genders and ages.

The RGB illumination on this mouse is fully customizable through their free downloadable software and allows users a variety of different light effects. While I thoroughly enjoyed customizing the mouse and match it to my keyboard, it was difficult because the RGB function uses a sliding scale rather than having an input function for the numerical values.

Going from a claw grip to palm grip can result in a transition period but it gets easier the more you use the V551.

The V551 wasn’t targeted for specifically for office work but it’s a really handy mouse to use, especially if your work involves graphic design. I found it really helpful to adjust the DPI depending on what I was doing especially when I was creating a graphic in Photoshop and then change it again when I was done.

Viper’s V551 really demonstrates that qualities when you are in-game – whether outrunning a killer in Dead by Daylight or if you are defending an ancient in Dota 2. To play Dead by Daylight effectively, you really need a mouse that is able to flip around the screen quickly and have a good polling rate. With the V551’s polling rate of 1000hz, there was no lagging in-game (at least not due to the mouse) and I was able to ‘mostly’ escape the killers in the game.

When I was playing Dota 2, I programmed my mouse buttons to correlate with my hero spells. This is not the best strategy if you are trying to win competitive games but I wanted to test the response time of the mouse buttons and if the buttons were accessible. Good news, they are accessible and the response time of the buttons is good. Whether do to skill, teamwork, or the new mouse – I won all my Dota 2 games with this mouse.

The V551 features PixArt 6,200 DPC optical sensors that have Omron switches rated at an impressive 10 million clicks. Users have the ability to program their mouse up to 12,000 DPC through their software if they chose to.

This wired mouse has a super convenient 1.8m USB-A braided cable which allows for gamers to configure their desk setup without worry about the limitations of a short cable cord. The V551 has a total of eight buttons on the mouse with the seven of them being programmable. I’m personally a huge fan of the button on the top left of the left click button. It’s so easy to reach and it’s brilliant for gamers.

Share
Gillian is Hotspawn's Communication Manager. She is also a lifelong gamer with a habit of getting distracted by random side quests, falling in love with fictional video game characters and forever buying wards as a position 5 in Dota 2. You can normally find her watching far too many Twitch streams to be human and rambling about esports community issues with a cup of coffee in hand.
Follow me