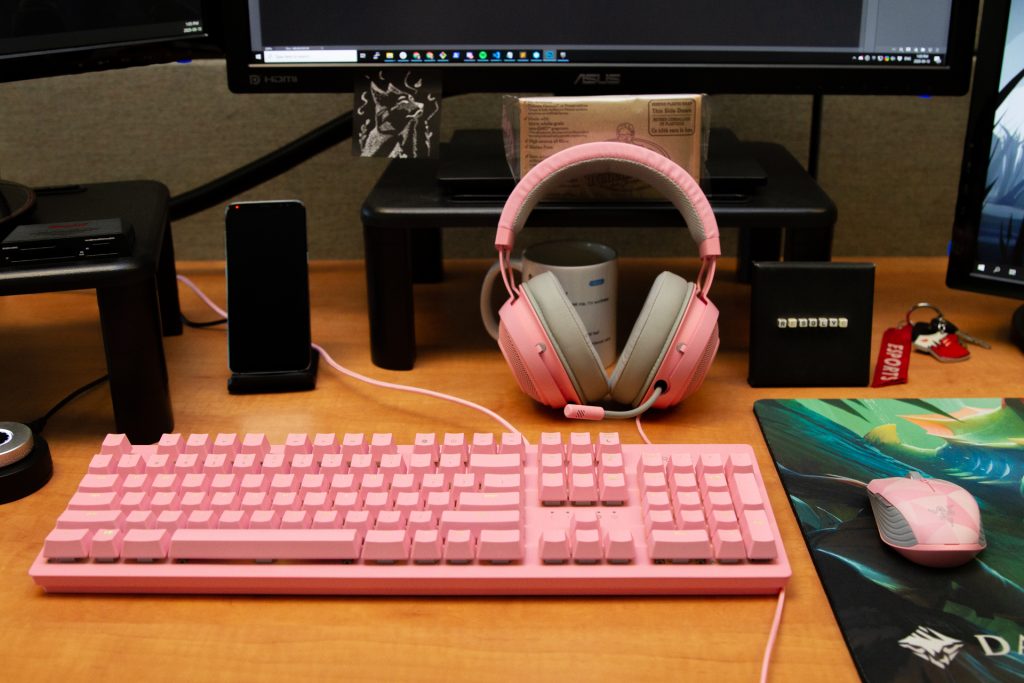 Razer has been absolutely killing it with their pink ‘Quartz’ line of peripherals for the last few years, and this addition is no less gorgeous. When you buy a Quartz peripheral, you buy it for the look, and the presence of this headset is striking. In the office, on video calls, and on broadcast, it exudes confidence in ways that only “I am a grown-ass man with a bright pink headset” can. It’s vibrant, stunning, and every call I’ve been on in the past week has commented on how beautiful it was.

The artificial leather and synthetic mesh headband is comfortable, with a soft touch that’s a relief compared to some of the popular ‘tight fit’ designs like the Logitech Pro-X or the Corsair Virtuoso. It’s also quite light – significantly lighter than my regular Turtle Beach Elite Pro 2s. I don’t remember the other iterations of the Kraken being this comfortable, so I’m not entirely sure whether new materials were required for the Quartz look, or whether I was just starstruck by their beauty in a way that carried over to how I felt wearing them. 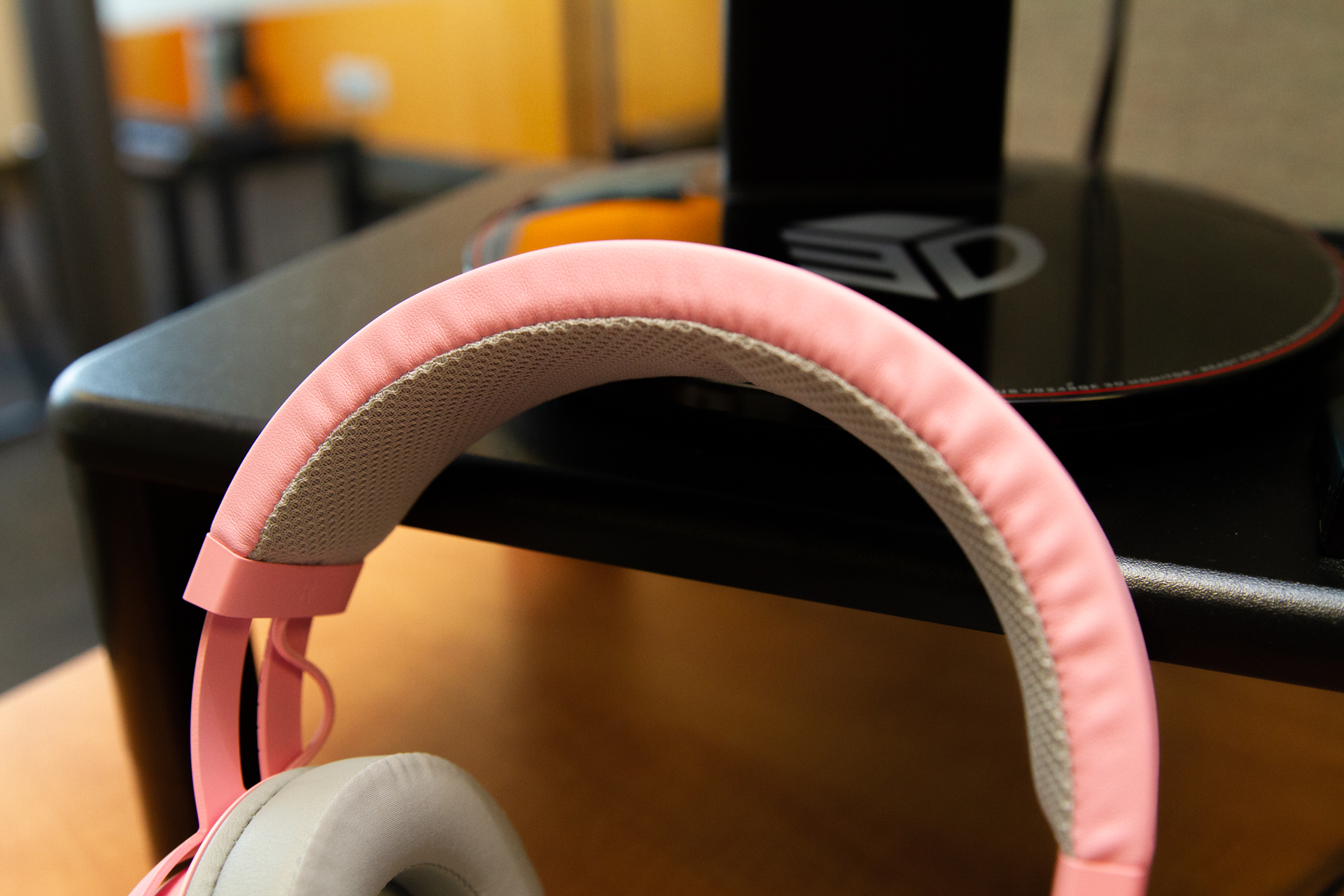 Look at the stitching! Look at the finish on the metal! Look, you fools! Gaze into the eyes of your rose salmon gods and cower! Every day I stopped for a few seconds to admire how stunning my desk was with an array of Razer Quartz peripherals before I sat down.

Under the hood, this Kraken sounds, feels, and performs the same as all the other Krakens. The audio is definitely tuned for gaming – clarity of sound effects is good, and audio cues in-game are easy to follow. Like most gaming-focused headsets, this causes it to suffer when listening to music. Tracks that would normally have punch and kick to them have a sense of flatness.

The Razer Kraken Quartz is a purely passive headset, connected by 3.5mm audio cables. It doesn’t require a fancy amp to drive it, and you’ll get plenty of volume and performance out of any desktop computer 3.5mm output, or your phone. However, the passive design means that certain features and functions you might come to expect from similarly priced units aren’t available.

There’s no option for sidetone, which plays sound from your mic back to you, so I was both continually talking louder than I needed to, and never quite sure whether the mic was picking me up. All my other headsets have some form of sidetone, and I didn’t realize how much I’d miss it.

The other irritation was the difficulty of finding the mute slider on the cable when I needed to cough, or talk to someone next to me. Other Razer headsets with similar mic designs have a push to mute function on the mic itself with a light to indicate whether you’re muted, and although this is to be expected from a passive headset, I still missed it.

Quality-wise, the mic does a decent job at picking up your voice, regardless of how it’s positioned. While other fancier headsets require you to set them up just right, the Kraken Quartz hears you loud and clear no matter where the boom is.

The trade-off for this lack of precision is that it doesn’t sound particularly good. It’s fine in calls, and you’ll be easily understood, but streamers should continue to use desktop microphones rather than rely on the built-in mic if they can possibly avoid it. 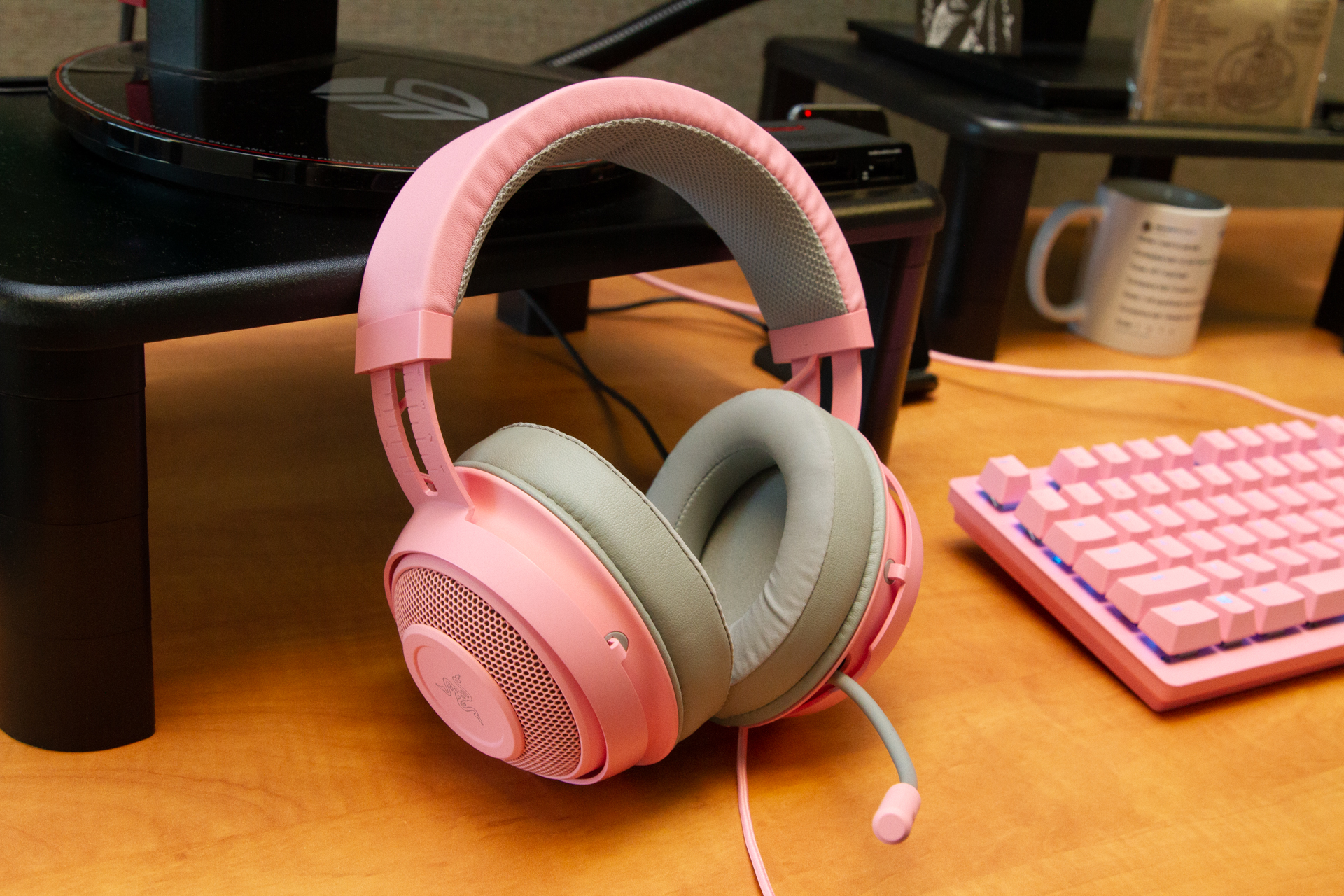 All that said – I liked them. The Razer Kraken Quartz is visually impressive, whilst functionally adequate. You don’t buy them for the performance, you buy them because they look stunning. If you want the top-tier sound and the latest features you should look elsewhere, but if you want to stun everyone you join a call with, then this is the headset for you.