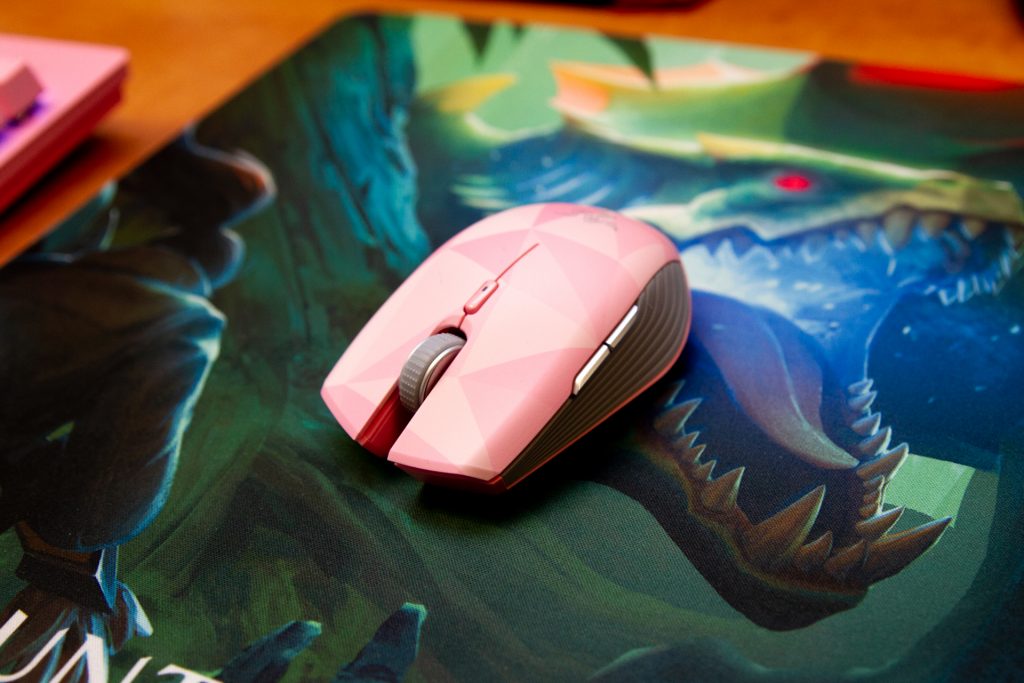 There are two reasons to buy wireless mice. Either you want freedom from wires for maximum gaming accuracy and performance, or you move around a lot. The Razer Atheris is definitely targeted at the second kind of user. Razer has always had mice with hybrid connectivity, but the Atheris comes the closest to getting it right of any I’ve used so far.

It can connect by a USB receiver, or by Bluetooth. For me, this means having the USB receiver on my desktop, while Bluetooth paired to my laptop. A selector switch on the underside tells it which you want to connect to, or power it off. Initially I’d thought this feature would be pretty useless, but it turns out, I’m not at my desk a lot.

Between meetings, finding somewhere quiet to write, and wanting to sit on the couch after work, the multiple connectivity methods make the whole process easier. I’m a sucker for cable management – my cables are all nicely bundled away and zip tied out of view, and I don’t want to have to buy multiple copies of the same mouse to be able to have one with me when I’m away from my desktop.

It’s much better than just using a trackpad away from the desk, and more convenient than having two mice, unplugging a wired mouse to take with you, or even taking a wireless dongle with you. 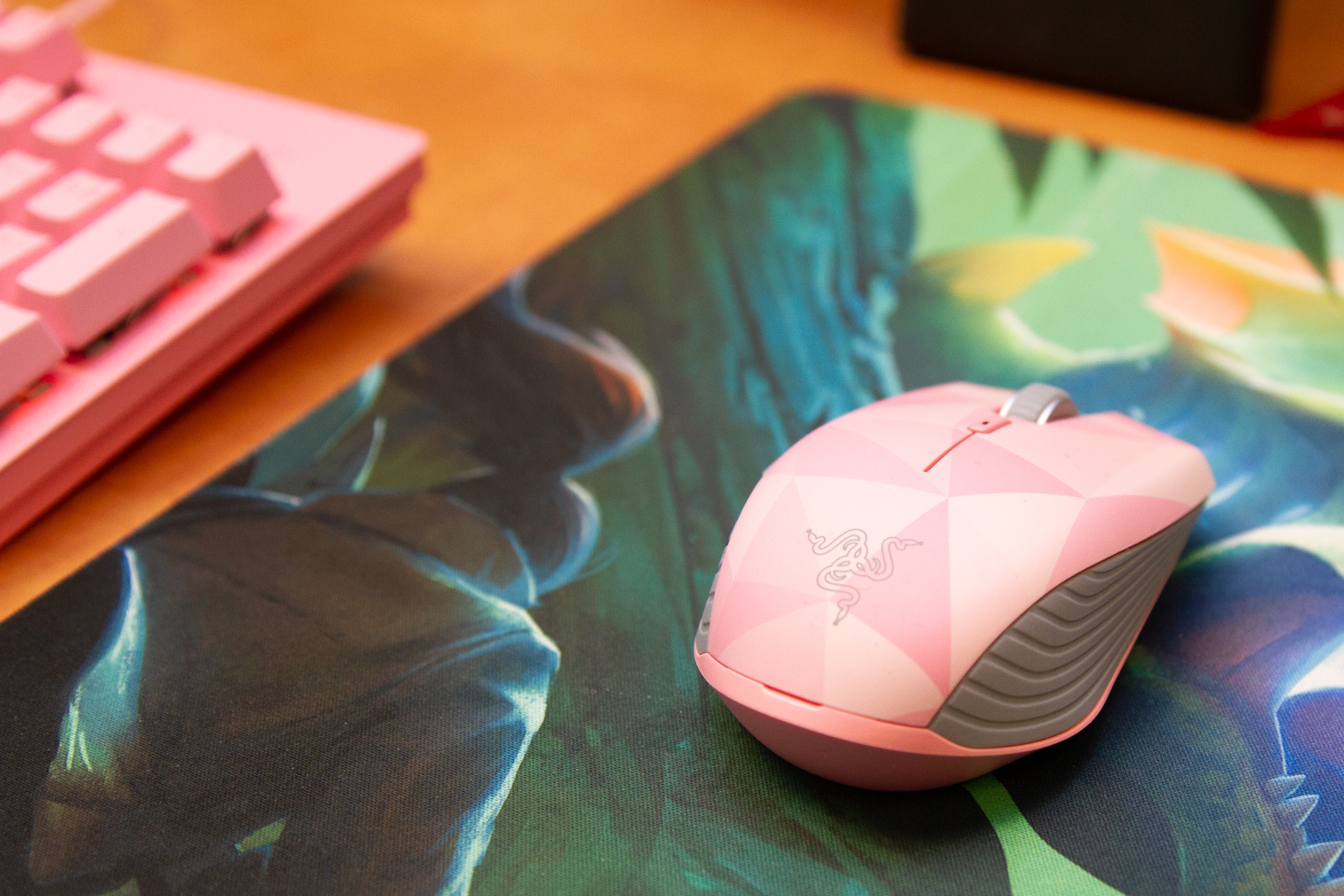 Pop the shell off and you’ll find an internal storage slot for the receiver, and a slot for the two AA batteries, which I didn’t even come close to exhausting the 350 hour capacity of. However, the batteries do present an interesting problem.

The weight of the Atheris is listed at 68 grams. That’s extremely low, and lower than the Razer Viper Ultimate at 74 grams. But here’s the catch – it’s 68 grams without batteries. It needs batteries to function. So it’s not really 68 grams, is it? By my measurements, two AA batteries weigh about 48 grams, taking it up to a moderately chunky 116 grams.

This still isn’t terribly heavy in the scheme of things, but calling it lightweight would be a misnomer. My preference for lightweight mice comes from an old mountain bike injury, which is exacerbated by stress, and heavy mice. I didn’t experience any pain using this, but if I bought this for myself for its listed weight, I’d be disappointed.

Despite the bait and switch, the physical design of the mouse is wonderful. The soft rubber side grips are a welcome change from my usual Razer Viper, and the scroll wheel is a delight. Like the side grips, there’s a feeling of softness that accepts your fingertips, and the combination of light touch with meaningful feedback is a clear strong point. This ‘soft touch’ feel is consistent across the entire user experience – even the casing’s texture is neither smooth nor rough, a middling matte.

Being on the smaller side, the Atheris is suited to a finger or claw grip. At 9.9cm long, it’s nearly 3cm shorter than most of the other mice in the Razer lineup. Unless you have very small hands, trying to palm it will be difficult. The thumb button placement sits really nicely with a finger grip for me, and the buttons were both easy to locate by feel and to press. I use thumb buttons pretty heavily during web browsing, for push-to-mute in calls, and in gaming, so having these perfectly positioned scored big points with me.

The tracking is accurate, and there was never any wireless interference despite the litany of wireless devices hanging around my desk at any given moment. Bluetooth remains Bluetooth and as usual, is a convenience – it’s not there for performance, and it shows. This is just a problem inherent to using Bluetooth for mice. It’s there so you can have a mouse while you’re away from the desk, isn’t really going to be great for gaming if you’re used to that snappy feeling. 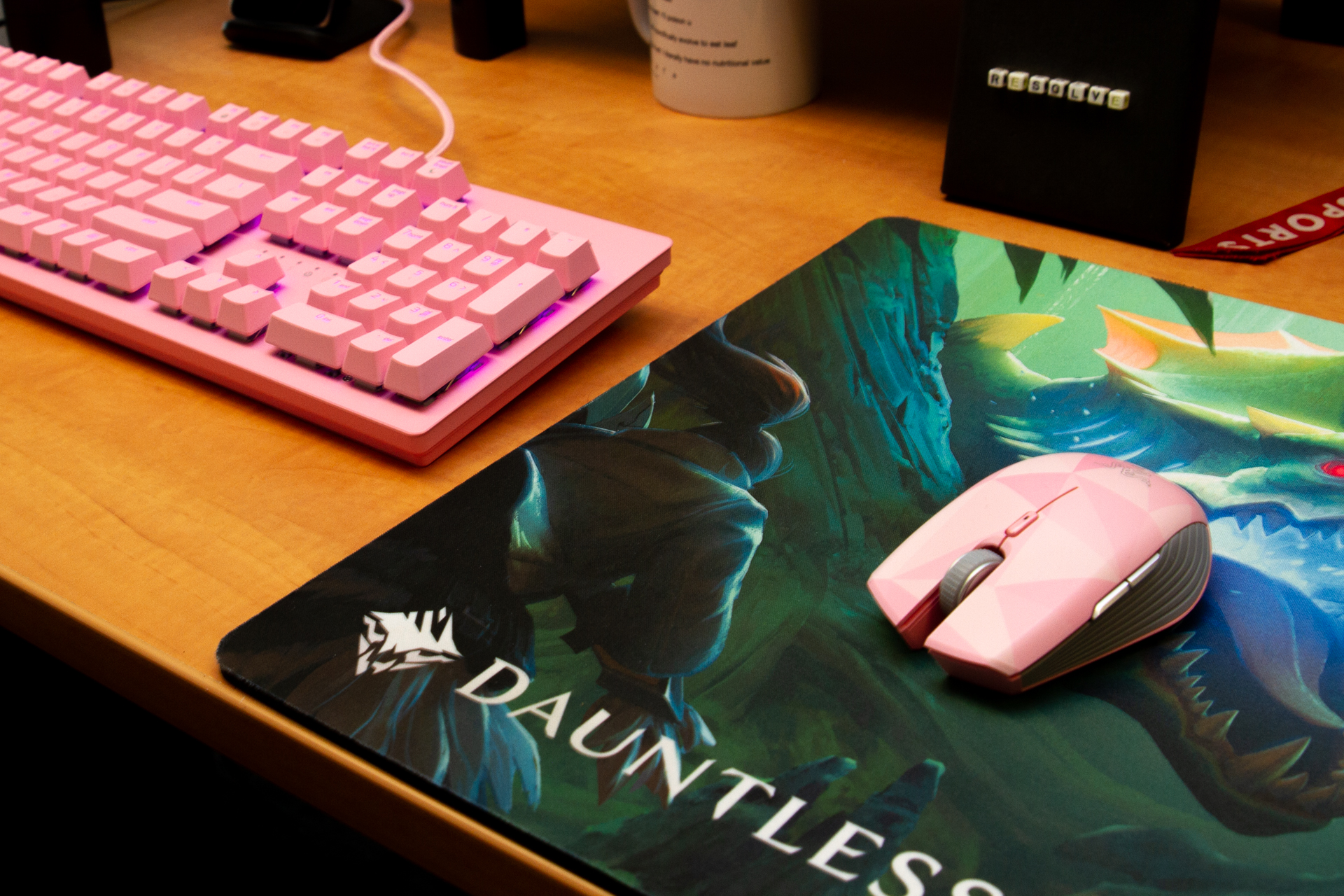 Then again, this isn’t supposed to be a “Serious Business” gaming mouse. It’s a compromise for convenience, as evidenced by the use of replaceable AA batteries instead of a charging station so you can just buy more if you’re out. If you want good performance, you have to use the wireless receiver. The receiver is tiny, easy to move, and stores inside the mouse itself, so taking it with you isn’t really an issue. If you’re like me and your ‘away from the desk’ time is productivity or chatting, this won’t be a problem.

One thing does puzzle me though – the triangles. All the rest of the Razer Quartz gear is painted flat pink, with triangles on the box. The Atheris has a flat pink box, with the triangle design from the other gear’s boxes on the mouse itself. Why invert the theme? It looks weirdly out of place. None of the other Quartz mice are like this – the Viper Ultimate and the Basilisk in Quartz are both flat pink, like the entire rest of the range. For a company that prides itself on consistency of branding, the choice just feels strange and while not jarring, it’s just .. off.

So, should you buy it?

Well, it depends. If you want a wireless gaming mouse that also happens to be pink, the Viper Ultimate Quartz is a better choice for you. It tracks better, is lighter, and matches the visuals of the rest of the Quartz lineup.

The strength of the Razer Atheris Quartz is that it can do Bluetooth, and the batteries can be replaced. If you travel, move around a lot, or are generally not near your desktop, then it’s a fine choice if you’re willing to deal with the weight, and either Bluetooth or moving the receiver. But SteelSeries just released a wireless hybrid version of the fantastic Rival 3 that’s cheaper, lighter, has longer battery life, and RGB. We haven’t tested it yet, but if it’s anywhere near the wired version, it’s likely a better choice if you’re after the wireless/bluetooth functionality.

At its core, the Razer Atheris is a compromise of what you’re willing to deal with. If the aesthetic and the convenience are worth the hit on weight and tracking, then it’ll serve you well. But personally, I don’t like to compromise on weight or performance, and ultimately that is what the Atheris requires.