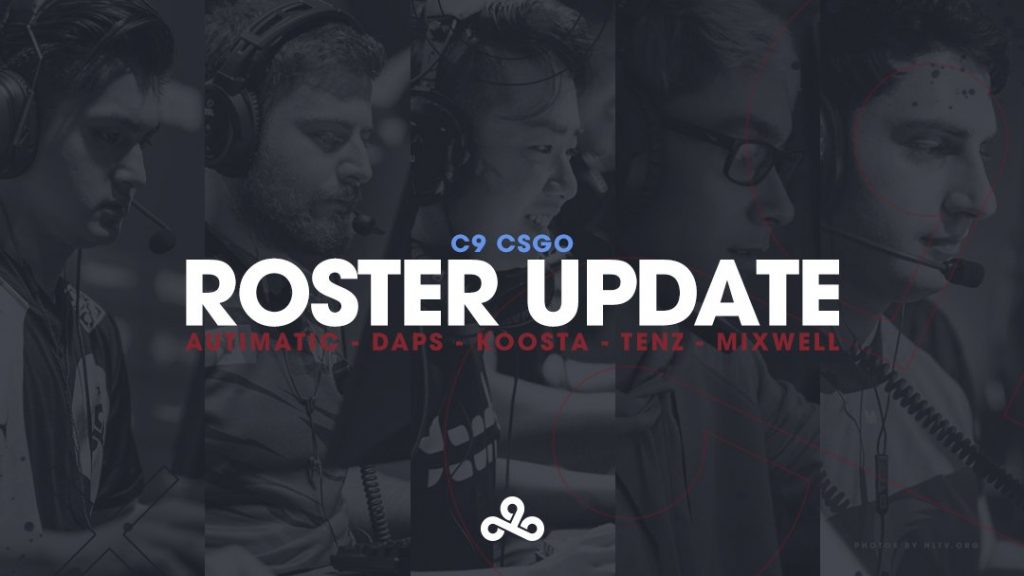 North American esports organization, Cloud9, has revealed an almost entirely new roster to compete in its Counter-Strike division. After a series of changes to the team’s core over the last several months, current adjustments sees Will “Rush” Wierzba, Malik “Golden” Selim Rahim, Daniel “vice” Kim and Rene “cajunb” Borg out of active rotation.

Cloud9’s current roster will be as follows:

The organization commented on the recent changes in a release issued alongside the announcement.

“Our new team lead by JamesIRL brings a wealth of variety and experience, ranging from true veterans to rising stars.  Pairing the experience of autimatic, daps, Koosta and mixwell with the new rising talent of TenZ, we are excited to take the next step in the evolution of Cloud9 CS:GO.”

Only autimatic is left from the prior team, having joined in 2016. He helped net Cloud9’s historic Major win in Boston, so it is not a surprise to hear he’ll be staying with the squad. The hybrid AWPer has been instrumental in Cloud9’s success and development. He is also regarded as one of the best in North America.

Alongside autimatic is a diversified bunch of both experienced players and rising talents. Former Complexity captain, daps, will join the team presumably as Cloud9’s IGL while Koosta will likely be brought on to vamp up the team’s stopping power as he did on Ghost Gaming. Transitioning from Movistar Riders, 23-year old Spainiard, mixwell, will bring capable AWPing proficiency with experience around top teams such as OpTic Gaming and G2. The quintet is completed by young talent, TenZ, who is making his first leap to a tier-one organization by playing for Cloud9.

JamezIRL rejoins Cloud9 in a coaching role after working as the team’s analyst during their time as North America’s best CS:GO team. A former ESEA MDL Rank S player himself, his coaching career stretches back to 2017 where he helmed GX, prior to play under the Torqued banner. The remaining trio of Torqued would sign on with Ghost Gaming where JamezIRL and Koosta would compete together for over a year, with third-fourth place finishes at both DreamHack Open Atlanta 2018 and iBUYPOWER Masters IV.

The news of Cloud9’s newest roster comes with some mixed emotions. The organization has toyed with so many different variations in the last six months alone. Supporters of the North American team have been crying out for a stable roster they and the organization itself can invest in; all things considered though, there’s a healthy mix of experience, past relationships and skill among the latest signees that has made this group arguably the most welcomed bunch yet.

Cloud9’s first showing with the new team will be at BLAST Pro Series Los Angeles, July 13 – 14.